Kaki King steps outside the neck 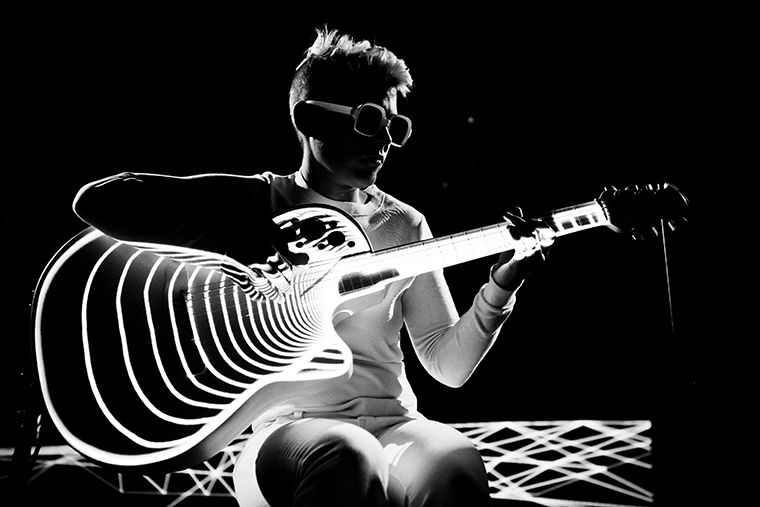 Kaki King performs her best, bathed in the glow of the performance.

Kaki King, a Brooklyn-based guitarist and composer, has released six albums over 10 years, each more virtuosic than the last.

Kaki is currently touring with her innovative multimedia experience The Neck is a Bridge to the Body, which projects prophetic visions of creation and death onto her guitar as she plays.Kaki King will be coming to City Winery, 1200 W. Randolph St., March 13.

The Chronicle talked with Kaki about relationships, the creative process and the power of visualization.

THE CHRONICLE: As an artist who doesn’t really use words to communicate on stage, how do you see the relationship with your audience?

KAKI KING: I try to stay out of the way as much as I can and let the relationship be between the music and the audience, and that goes for live [and] recording. I’m not an artist that inserts myself into my art, as I’m kind of finding out when I look back at what I’ve done and what I want to do in the future. There is not a personality cult.

That being said, I come across as a very serious guitar player who takes playing and performing seriously and I want to do it at the highest level possible, but everything else is a bit of a joke to me, and I don’t want to sound too immature or silly, but I don’t take the rest of life as seriously as I do the performance. So there’s a little bit of a dichotomy There’s this person performing, and then I sort of joke around. Every person has their own relationship with albums [and] songs or pieces that I’ve done, and I don’t have any say in that. I want that to be something that gets developed between the work and the audience member, I don’t have any, “You should feel this way, or you should think one way or another about what I do.” I try and stay out of that.

The Neck is A Bridge to The Body feels like an execution of an idea. Was that the intention?

In many ways, it is, and the piece has grown to be really special, beautiful and moving, but at the same time, it’s not me exactly. And taking the idea of performance, we’re all kind of performing in various ways as we go throughout our lives. There is certainly an exaggerated version of me that I play on stage no matter what due to the nature of the stage, but when I step outside the context of the neck, I’m a very different person than I am when I’m actually performing it.

This will be your fourth year performing The Neck is a Bridge to The Body. How has it changed over the years?

It’s crazy that we’re still doing it. A lot has changed in ways I’m not honestly always aware of, [and] certain little things get improved over time [and] get altered and tampered with. When you’re doing something musically, it’s sort of easy to say, “I’d rather do it this way,” and then you’d simply play it a different way and you’re done. When you’re working with tech and video setups, any change is a drastic move because it involves so many moving parts. Other people have to be on board and coordinated.

What we’ve done is tightened up the tech and made it a lot easier to perform the show, much more stable in our computers. So there’s just constant cleaning up and improving the sounds I’m using for the guitar and making those fit the show a little better each time we do it. So a lot of very slow and subtle adjustment, but when I think about the show as performed three years ago versus the show now, they’re incredibly different shows.

How much quiet contemplation goes into your creative process?

Sometimes it doesn’t take any, and a lot of times it takes me not focusing on trying to work on something, to get something out. For instance, my favorite times to play guitar are often while something else is going on, while I’m watching a movie[or] my kids are playing on the rug in front of me, while making dinner or someone’s waiting for someone else to go out.

It’s actually harder than I realize for me to just sit and play in total isolation. It’s very unconscious, and it only happens and works because I’m constantly touring and I’m constantly playing. I don’t really take a break from the guitar as a person or as a performer.

You said you tend to remove yourself from your work, but earlier this year, you came out with “Bruises,” a visualization of data surrounding your daughter’s medical treatment. What did you learn from getting that visualization?

The person who did the visualization, Giorgia Lupi, is a wonderful friend of mine who is so helpful and supportive, and we have done two other projects prior to this. It was only because I knew her and I’d worked with her that I knew to collect data, period. I had no idea we were gonna turn it into an art project. Ultimately, my daughter is fine, she doesn’t know that she has this. This is an inconvenience [to her] because she has to go and get her blood checked at a doctor, but for me, I was beside myself with this diagnosis.

From a caretaker perspective, it was much more about me being able to look at my actions and behavior and seeing how her platelet count could be really low, and I would be acting out. I would pick a fight with someone or just be so angry at the world, but my daughter was actually fine. The empirical evidence was that she was happy and she wasn’t sick or feeling bad, she just has low platelets and it’s something that needs to be looked at [and] hopefully [will be] resolved. It was a really good way to sort of look at evidence of me freaking out and go “OK, let’s do the opposite of that.”