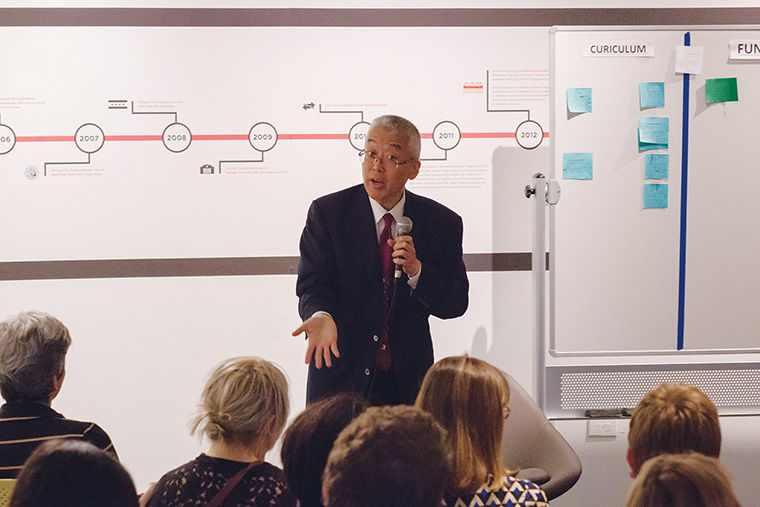 “How close do we get to fulfilling our promise to you and setting you up to be successful?,” Kim said. “That’s the fundamental question.”

Kim was questioned about the Communication and Media Innovation Department’s retention rate and whether retention was a problem in other departments. When comparing student enrollment between the Fall 2015 and current semesters, the CMI Department lost 69 students, according to data from the Office of Institutional Effectiveness. Kim said colleges are generally considered successful if they have an 80 percent retention rate.

College spokeswoman Cara Birch said the retention rate at the start of Kim’s presidency in 2013 was 67.5 percent, and is now up to 70.5 percent. Kim added Columbia is increasing its focus on suburban enrollment in response to a pattern of dropping enrollment from the city’s suburbs.

“We’re working on this,” Kim said. “We keep asking the question, ‘How are we going to build our enrollment back to the point where we’re a little bit stronger in terms of the resources we have as a result?’”

Columbia’s fashion studies BFA program’s curriculum changes were also brought up after a student asked Kim about his involvement in the changes and how they would benefit students.

As reported Sept. 30 by The Chronicle, Jeff Schiff, interim chair of the Fashion Studies Department, sent an email to students announcing curricular changes, later clarified to only be proposals, that would eliminate the fashion BFA program and create a single undergraduate program to meet the demands of the fashion industry.

Kim said he was not involved in the decision and emphasized this is only a proposal that would need several levels of approval before being implemented.

“My question for all proposals is going to be, ‘Show me where the input is from the industry that justifies [the change]’, Kim said.

The college’s recent rebranding was also discussed. As reported Sept. 19 by The Chronicle, a rebranding and advertising campaign was launched to increase enrollment and brand awareness.

Kim said when his presidency began, he was surprised to see that Columbia was not advertised sufficiently.

“From so many years of not stating that we are a quality institution, the world tends to not know that about us,” Kim said.

“They were very honest when it came to money and branding,” Merry said. “They didn’t hide anything, [and] I like that.”