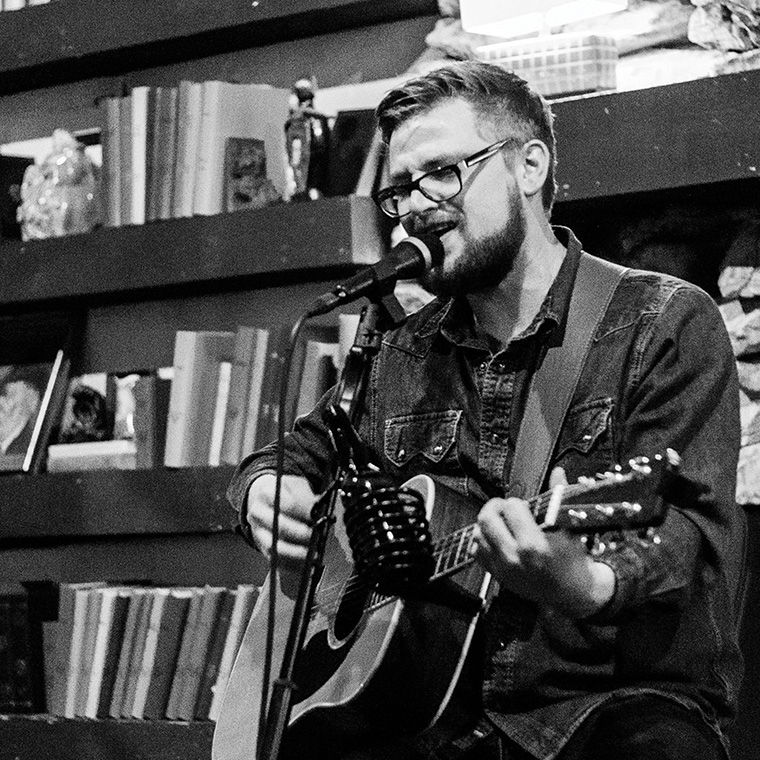 Zach Joseph Wcislo, a 2012 music alumnus, received a “golden ticket” at his Denver audition for the 15th and final season of “American Idol.”

Zach Joseph Wcislo, a singer-song- writer from the Chicago suburbs and 2012 music alumnus, transferred to Columbia in 2010 from Eastern Illinois University to further his music studies.

Wcislo works in construction full time, recording music and performing in his free time. He said he was surprised when he received a “golden ticket” to Hollywood after auditioning for the 15th and final season of “American Idol.” That performance was not televised, but Wcislo will appear on the show’s Hollywood round in the upcoming weeks.

The Chronicle spoke with Wcislo about his music, how Columbia shaped his voice and his “Idol” hopes and dreams.

THE CHRONICLE: How would you describe your music?ZACH JOSEPH WCISLO: I would say it’s a blend of pop [with] soul influence. What I’ve been writing now has more of an R&B vibe. My older stuff is [more] pop sounding. It’s more singer-songwriter pop.

What made you want to audition?

A friend of mine suggested it. She was offered an audition and is in contracts with another show and passed it along to me. Also, it’s the final season so I thought, ‘Why not give it a last go?’ I got a private audition in Chicago. After the private audition, they sent me to Denver. I auditioned there and got a “golden ticket.”

[The show has] you prepare two songs, and that’s not saying you will perform the two songs, but just in case. I was terrified with auditioning. It’s not like I haven’t sung before, but not in front of three celebrities. It was very nerve-wracking, but I was still con- fident. I was more nervous about the speaking part. I just got up there and did my thing, and they really liked it. I don’t audition for things very often, so that was kind of new for me. It’s a different avenue of singing. [On “American Idol”] you’re literally auditioning in front of America. It’s different, for sure.

How did Columbia prepare you for “American Idol”?

One way Columbia really helped me—be- sides teaching me music theory, giving me voice lessons and the performance as- pects—[was exposing me to pop]. I always loved singing pop music but I was show- ing more and more [interest in a] music education degree. I actually transferred to Columbia in 2010. I was a music educa- tion major at Eastern Illinois [University], and I ended up switching from singing art songs to completely changing my voice

to find my pop voice. That’s the biggest thing I’ve taken out of Columbia besides songwriting. Obviously songwriting isn’t a big part of “American Idol,” but if things go well down the road, that [could be] a factor in the success of my career.

How will having been on “American Idol” help your future music career? The publicity is something that could very well help my career. Being able to… be on TV and everyone who’s watching— millions of people—will be able to see my face, and that’s facial recognition right away. That’s a huge plus. It’s also forced me to be active on social media. I’m not a huge social media guy, but it’s definitely forced me to be a little more aware of using social media to my advantage. It’s helping me become more of an artist in that regard. Nose to the grindstone most of the time, always having something for people to get their hands on.

Why did you transfer to Columbia?

I had a change of heart and wanted to be more of the performance side of the spec- trum. My voice lesson teacher [at EIU] realized I wasn’t necessarily happy. He could tell that I was missing something. He decided to tell me I should probably go into songwriting and performing because he knew that’s where my heart was at. I started looking up liberal arts colleges that had that degree that was more contempo- rary and not neccesarily classical music.

That led me to Columbia. I checked it out, went to orientation and the rest is history.

How has your music career developed since graduation?

When I’m not working, I play gigs on the weekends. I try and play a gig at least once a weekend or at least three times a month.

Other than that, [I’m] constantly writing songs. I released [an album] a year and a half ago, and I recorded it like two years ago. It’s called Love Spectrum. I went to New York to do that. A friend of mine was working at a studio at the time and he got me some really good rates for studio time. Other than that, playing gigs and trying to collaborate with people as much as possible.

[With my album], it was a 7-song EP. I wanted to give people a taste of what I’ve been doing. I’m not the richest man in the world so it’s kind of hard to fund an album. I think in the next couple months I’m going to start a Kickstarter or Indiegogo cam- paign to do my second album so I can fly out to New York, do it all over again, but this time create a full album.

What are you excited to see when Hollywood Week is televised? One of the biggest things is I met a ton of cool people while I was in Denver. It’s definitely going to be cool to see. My audition was not aired, so if I do get to see mine that would be pretty awesome—but also to see all the other people I met and to reminisce with them. Even though they are all over the country, it will be great to reminisce with them via Facebook or text and hash it out again.

How do you think talent shows change the music landscape?

Some people say auditioning for shows like these is the easy way out [or] you’re trying to fast-track yourself. [But] it forces you to be aware of how powerful being on top of your game all the time can be. You still have to work hard. You’re not selling out, [and] you’re not trying to take the easy road. Yeah, it can put you a couple steps ahead, but you’re still really grinding and working hard.

A lot of times people who don’t do these shows, they have time to build. I’m not say- ing I haven’t practiced and tried to perfect my craft. I still do that. Even old musicians are trying to do the perfect thing. Even people who take the so-called ‘hard road’ sit there and have time to let things stew [and find out] what works and what doesn’t. If things go well, their crowd slowly builds and they gradually book a bigger venue and that kind of thing, but this is ‘Hey, you’re on TV. You’re in front of millions of people,’ and it’s equally as hard, in my opinion.