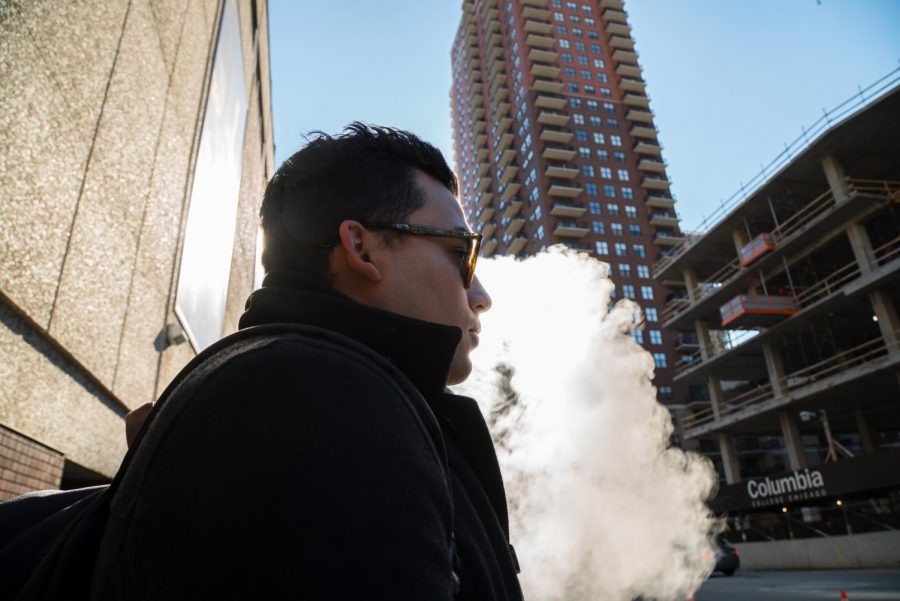 The ongoing battle between Chicago and big tobacco companies and e-cigarette distributors has intensified after a Nov. 12 announcement of a lawsuit against multiple retailers.

“We found out how easy it is for youth to get their hands on e-cigarettes and vaping materials like flavored cigarettes. This is being done both online and in our brick and mortar stores,” Escareno said.

She said the operation involved working with a minor using a Visa gift card, and found that of the 40 online e-cigarette retailers, eight processed an order for e-cigarettes, accepted payment and delivered the product but never checked the age of the buyer. The deliveries from these eight websites were sent to a city office and received by BACP staff at the enforcement headquarters.

Junior fashion business and fashion journalism  double major Kanwal Memon said she started smoking e-cigarettes occasionally because her friends did but purchased her own in May 2018.

“I wouldn’t say [e-cigarettes are] attractive, but the thing that drew me to it was honestly just the idea of smoking. It helped ease my mind a lot,” Memon said.

During a Nov. 12 press conference, Chicago Department of Public Health Commissioner Dr. Julie Morita said most people who use tobacco began using these products when they were young, which is when they are more likely to become addicted to nicotine.

“Chicago has become a national leader in the fight against big tobacco,” Morita said. “We extended the city’s clean indoor air ordinance to include e-cigarettes. We banned the sale of flavored tobacco, including menthol near high schools. We banned chewing tobacco from our ballparks and our stadiums. We raised the age of tobacco purchase to 21.”

Cinema art and science major Chelsea Gill said she has been using e-cigarettes on occasion since high school.

“[Marketing] is targeted toward the younger audience [because] cigarettes don’t carry flavors, so the vaporizers offer fun-sounding alternatives to make it sound like you’re not really smoking cigarettes,” Gill said.

Garrett Sherbet said he now uses e-cigarettes as a way to help him quit smoking regular cigarettes, but that was not always the case.

“When I was in high school, I would get the vape from somebody older, and then I would try the flavors that I knew, like pink Starburst. I never caught myself smoking anything like the menthol or regular tobacco flavor,” Sherbet said. “Now, people are using it for contests and to look cool, but [there are] people out there using it [to try] to quit [smoking].”

Also during the Nov. 12 press conference, Mayor Rahm Emanuel said past rhetoric from e-cigarette companies claimed vaping was an alternative to smoking or about quitting smoking.

quitting and everything to do with addiction.”