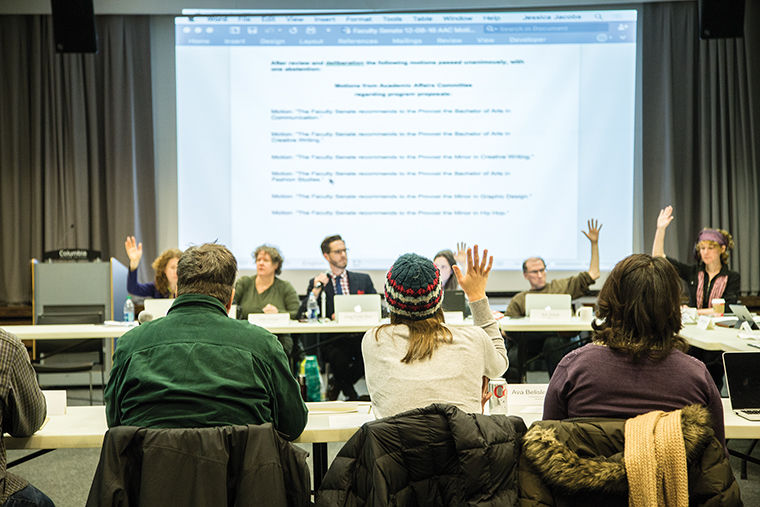 The Faculty Senate voted on several motions and discussed a proposal to create a new fashion B.A. program during their Dec. 9 meeting.

The Faculty Senate discussed new proposals including creation of a new graduate school, changes to the Faculty Manual, and the fashion B.A. program during its final meeting of the semester.

During the Dec. 9 meeting, held at Stage Two in the 618 S. Michigan Ave. Building, senators voted to approve a motion supporting a new graduate school that is designed to strengthen and expand graduate education at the college, a commitment stated in the Strategic Plan. The college announced the graduate school timeline this summer, as reported June 27 by The Chronicle.

Associate professor in the Art & Art History Department Jeff Abell restated the financial concerns with hiring new staff that were brought up during the senate’s last meeting. In response, Faculty Senate President and associate professor in the Photography Department Greg Foster-Rice assured him that there would be no additional costs because the college would not have to hire additional staff members outside of those already at the college.

“We have policies for how you hire a chair, a dean, but we don’t have any policy for how you create a new school,” Foster-Rice said during the meeting. “We wanted to both recognize what we thought was the positive reception of [Rasinariu’s] proposal and the fact that it fulfills the agenda of the Strategic Plan. We would hate to go any further without having proper policy in place.”

While discussing a new program for a B.A. in fashion studies, Faculty Senate member and assistant professor in the Fashion Studies Department Arnab Majumdar asked Miller if the division within the Fashion Studies Department was considered before approving the proposal and said the two different perspectives should be looked at throughout the process of approving proposals.

“The department is completely divided between the new program,” Majumdar said. “There are two different perspectives and the proposal does not reflect [them] and that discussion needs to happen.”

Miller said while there is concern for the approval process, the committee had to focus on the quality of the proposed curriculum to decide whether it should be passed.

“Whether or not one person or five people or 49 percent of the people in the department may have had differences of opinion, we have to accept what comes out of that process,” Miller said.

Foster-Rice said the Executive Committee is aware of the concern with the approval process of the proposal and added the Curriculum Process Manual will be up for discussion and revision so these issues can be avoided in the future.

“We looked at the significant series of arguments brought to us by all sides of this debate, and what we could determine from looking at those documents was that there was no failure to follow the process that we have. They were all followed,” Foster-Rice said. “That does not mean that there were challenges [and] significant dissention, but there was no failure to follow the procedures. We think that those processes can be improved.”