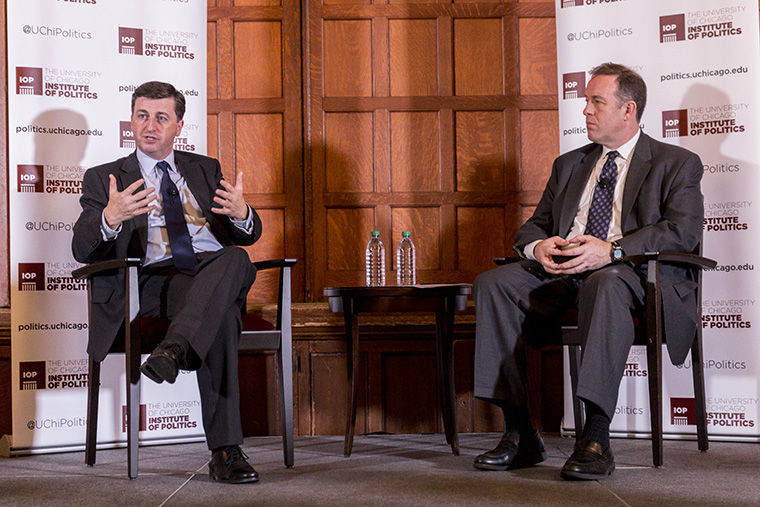 The Institute of Politics at the University of Chicago hosted former British politician Douglas Alexander Nov. 15 to discuss what led to the Brexit victory.

Alienation from the political system, anti-immigration sentiment, economic discontent, cultural anxiety and mistrust in government all contributed to the Brexit vote in June—and the success of Donald Trump in the presidential election—according to former British Labor Party politician Douglas Alexander.

On Nov. 15, the Institute of Politics at the University of Chicago hosted Alexander to discuss the reasons for Brexit’s success, and its relationship to the victory of President-elect Trump. Phil Levy, a senior fellow at the Chicago Council of Global Affairs, joined Alexander as the event host.

“Brexit,” a portmanteau of Britain and exit, was a referendum vote on the United Kingdom staying or leaving the EU. On June 23, with a vote of 51.9 percent to 48.9 percent, the British people decided to leave the EU.

Alexander, a member of the Labor Party, said people ignored evidence of economic issues that would arise from leaving the EU.

“In the referendum in Brexit, economic risk was subsidiary to issues of cultural anxiety and immigration,” he said.

Alexander added that then-prime minister David Cameron misread the situation and thought it was similar to Scotland’s voting that it should stay part of the U.K. in September 2014.

In Scotland, 62 percent voted to stay in the EU and 38 percent voted to leave. The reason for more anti-Brexit voters in Scotland is due to Scots being more comfortable as part of a multinational union, according to Alexander.

Alexander said misconceptions about economic issues played into pro-Brexit voters’ anti-immigration views because voters thought there was an economic cost for free movement of labor and allowing people within the EU to move to the U.K.

One dynamic to be noted, according to Alexander, is that areas with the lowest level of immigration tend to be the most intolerant of immigrants and vice versa.

“That is a very clear parallel,” Levy added, comparing this to America’s election cycle this year.

While it is yet to be confirmed whether the U.K. will officially leave the EU, Alexander said thinks likely to happen.

Levy said similarly, there is still uncertainty about how Trump’s campaign promises will translate to actual policies.

Jorge Quintero, a public policy graduate student at U of C who attended the discussion, agreed with Douglas’ assessment and thinks there are parallels to Trump’s success in the presidential election. He said in order for politicians to regain the trust of their constituents, there needs to be more transparent government.

“Politicians have not succeeded in transmitting what their government is doing to improve the quality of living,” Quintero said.

In response to an audience member question, Alexander said some politicians in the U.K. and U.S. have played the “immigration card” and “race card” to their own advantage. He added that it is the responsibility of politicians to measure their message with great care because it can lead to hateful actions from their supporters.

“Politics is the art of competitive storytelling,” Alexander said.