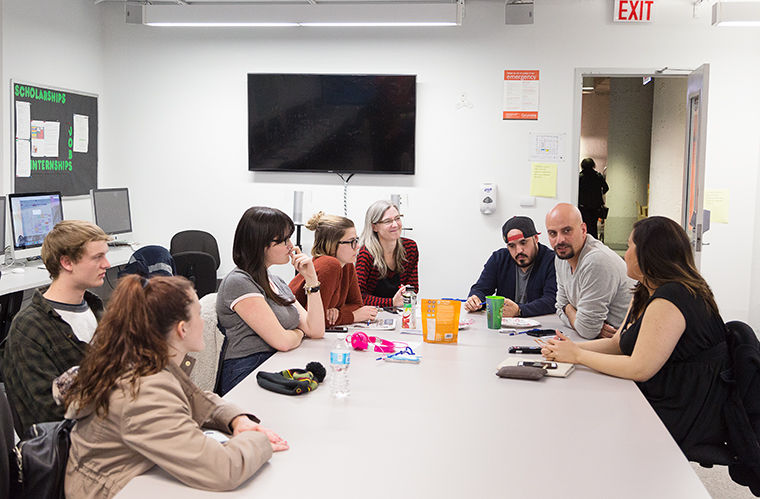 Journalism students from Chair of the Communication and Media Innovation Department Suzanne McBride’s “Covering Politics: 2016 Presidential Election” course were able to report in the shoes of political reporters and gain knowledge of the election process and the importance of remaining unbiased through coverage of the Iowa Caucus, the South Carolina Democratic Primary and the Illinois Primary at a March 29 Society of Professional Journalists’ meeting in the 33 E. Congress Parkway Building.

The five students, who each covered a different candidate, began the course by reporting on the Feb. 1 Iowa Caucus. Next they covered the Feb. 27 Democratic Primary in South Carolina and will cover the Wisconsin primary on April 5.

Abby Lee Hood, a senior journalism major, said she covered Martin O’Malley, the former governor of Maryland who has since suspended his Democratic campaign, because she wanted to follow someone who was not a front-runner. She said footage of her speaking to O’Malley was featured on CNN.

When Hood spoke to O’Malley in Iowa, she noticed other reporters had already asked questions she wanted to pose about the viability of his candidacy, so she had to think on her feet to come up with different yet relevant questions.

“I kept thinking, ‘What are issues that matter to me?’” Hood said. “I asked him how he appealed to female voters. He said he supported women’s rights and listed bills he had passed in Maryland.”

McBride said the students were already knowledgeable about the election process and have become even more informed as the course has progressed.

Hood said during the Democratic caucus the small number of O’Malley voters were swayed by Hillary Clinton or Bernie Sanders campaign members. She said only one O’Malley supporter “held strong” to his views.

“We were put in the shoes of reporters who cover politics for a living,” Garcia said. “It was very fast-paced, and I was able to live the job of a political reporter.”

Elaine Rojas-Castillo, a first-year graduate student, said she better understood the importance of listening to other voters’ opinions through her coverage of Hillary Clinton’s campaign.

“It is different [covering the election] versus just being a voter,” Rojas-Castillo said.

Nader Alghoul, a first-year graduate student, said he learned about reporting objectively while attending the Donald Trump rallies in Bloomington, Illinois, and University of Illinois at Chicago. Alghoul said he does not like Trump but remained unbiased in reporting on social media, and a Twitter user expressed appreciation for his objectivity.

“I am not here to judge Donald Trump,” Alghoul said. “As a journalist, you have to be neutral.”

Garcia said remaining unbiased may be difficult, but looking at both sides of political topics is beneficial to writing and developing stories.

Garcia said it did not matter that Trump did not speak because in the seven hours before Trump announced he would not attend his rally, Garcia came up with a story about the rally’s protesters and supporters. He said he found a man at the rally who attended as a business venture solely to sell his political T-shirts.

“You have to remain objective,” Garcia said. “You are not there to shoot one side when something is happening behind you.”