Chicago ‘to be’ part of Shakespeare 400 celebration 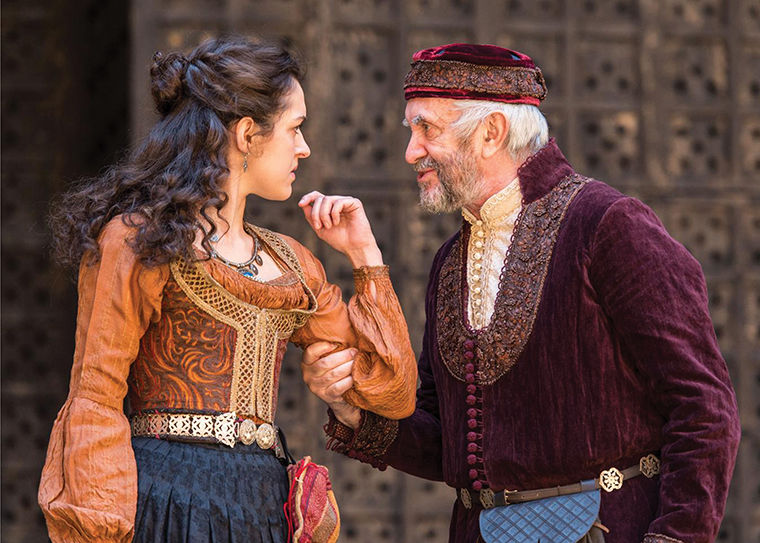 Phoebe Pryce (Jessica) and Jonathan Pryce (Shylock) will perform in Shakespeare’s Globe Theatre’s production of “The Merchant of Venice,” featured at Chicago Shakespeare Theater as part of Shakespeare 400 Chicago in 2016.

It seems this is not the “winter of our discontent” because Mayor Rahm Emanuel announced on Nov. 13 a yearlong festival, which is scheduled to take place in Chicago during 2016, in honor of the 400th anniversary of William Shakespeare’s death.

Chicago Shakespeare Theater, 800 E. Grand Ave., will produce a production of “Othello” to be performed in early 2016 and “Twelfth Night” to be performed in spring 2016 as part of their festival contribution. Both will run at the theater and tour schools around Chicago, Sayegh said.

Chicago Shakespeare Theater’s main production for Shakespeare 400 will be the two-part, six-play “Tug of War” series produced by the theater’s founder and artistic director Barbara Gaines, Sayegh said. The first part will take place in the spring and the second, running in the fall, are part of the festival’s more than 800 events and 1,000 artists, she said.

“There was always the idea that this festival would need Chicago’s great cultural institutions as anchors, and it would be strongest if it was a city coming together,” Sayegh said. “The festival is curated to bring the best of Chicago together and to reflect the people of Chicago.”

The Newberry Library is the largest archive of Shakespeare-related material in Chicago and will host events to accompany the celebration, said Jill Gage, reference librarian and bibliographer of British history and literature.

“We have a major exhibition that opens in September [2016] that runs until December 2016,” Gage said. “It will be about 125 items related to Shakespeare. This is everything from first editions of Shakespeare’s works to adaptations.”

Gage said Newberry Library is still finalizing events for people to experience Shakespeare at the library.

“One of the things Chicago Shakespeare 400 wants to do is make this global,” Gage said. “They have a lot of theatrical groups coming in from around the world, and what the whole project and Newberry does is talk about Shakespeare throughout time and how he has managed to touch people’s lives.”

The Lyric Opera of Chicago’s Deputy Director of Communications Holly Gilson said the opera will perform “Romeo and Juliet” in the spring.

“We’re going to see how we can contribute as the year goes forward, but the centerpiece will be ‘Romeo and Juliet,’” Gilson said. “There will be multiple opportunities for people to enjoy the performance even if they can’t be in the opera house.”

According to Caroline Latta, a professor in the Theatre Department, Columbia’s Theatre Department intends to make every effort to be as involved in Shakespeare 400 as it can be, but she cannot say much until the department finalizes its season for the 2016–2017 academic year.

“We offer a Shakespeare class every semester, so we will definitely be looking for the ability to bring in some people to liaison in some way that is yet to be determined,” Latta said. “We think it’s a wonderful opportunity, [but] we’re still in the planning stages at this point.”

Latta said she thinks the festival is a wonderful opportunity for the Chicago theater community to come together as a group from the top tier theaters to the college level. She added it is exciting that the festival is happening worldwide, and that Chicago will participate.

“[Shakespeare 400] positions [Chicago] as an ambassador to the world community,” Gilson said. “Chicago plays a very global role in the arts community, and this just serves to reinforce Chicago’s prominence.”