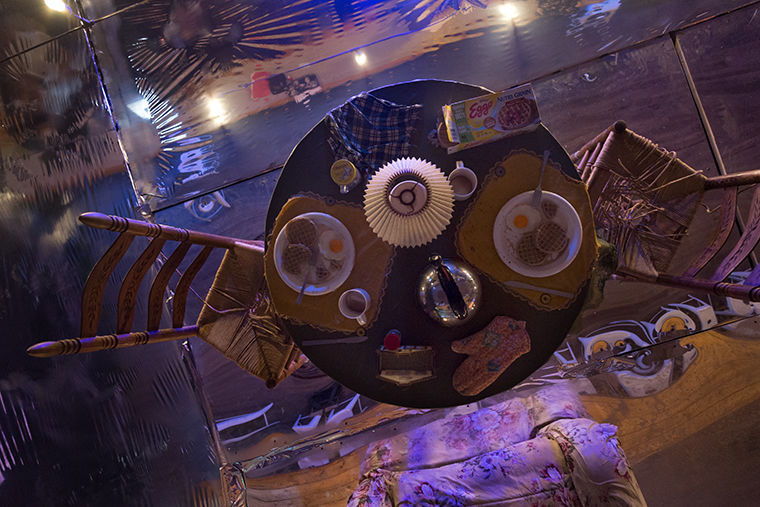 To create the illusion of being in multiple realities, Tarzian suspended some of his parents’ 80s furniture from the ceiling.

“Stranger Things” fans can visit the topsy-turvy world of “The Upside Down” at the latest Emporium pop-up bar in Logan Square throughout September before the October Season 2 release.

Saul encourages patrons to dress up as characters from the show and is considering having a costume-based event.

“We love to see people dress up; we’ve had a couple of people dress up as Eleven,” he said. We’ve had a girl that came that looked almost exactly like Barb which was cool. Nobody’s dressed up as a demogorgon yet but that’d be really crazy.”

To create the pop-up, which opened Aug. 18 in just four days, Saul brought in set designer A.J. Tarzian, creative director of local design company Anarchitype Productions, who worked on Emporium’s haunted houses for the past two years and will again this year.

Tarzian said he wanted to create something people could enjoy without even knowing the show. Rather than simply replicating the set, he made detailed references for the fans and worked to create “a bigger artistic gesture.”

Parallel realities, a prevalent theme in “Stranger Things,” influenced most of the design, Tarzian said. The living room furniture and mirrors are set up on the ceiling of the pop-up to create a spiraling-through-time feeling, he added.

“A person can only travel on the top of the tightrope, but a flea can actually walk on all 360 sides of that tightrope,” Tarzian said. “It’s sort of that idea you can exist in multiple realities while still being in this time and space.”

“Stranger Things” works particularly well as a pop-up theme because it is highly visual, said Sharon Ross, associate professor in the Cinema and Television Art Department, who teaches the “Stranger Things” script analysis course this fall.

According to Ross, themed venues are best used to grab people’s imaginations quickly and intensely, just as the show does. Timely pop-ups can create casual discussion about what was once known as “water cooler shows.” The internet has mostly replaced the water cooler, Ross said, thanks to streaming services like Netflix.

“Pop-up bars allow people to capture that and find other people who love the same thing that they’re obsessed with,” she said. “It happens on the internet, but it’s fun to actually meet people. It’s an antidote to the anonymity of the internet.”

Ross said the pop-up helps cement the show because it acknowledges the show’s artistry, affirming its value and impact.

Tarzian said he also seeks to provide guests with a unique experience and create a sense of discovery by presenting something familiar—a bar—in a curious environment.

“Things have gotten so monotonous as far as going out and experiencing things, so there’s not enough play in the world,” Tarzian said. “For me, it’s important to reach the people that don’t actively seek that out, because those are the people that need that the most.”