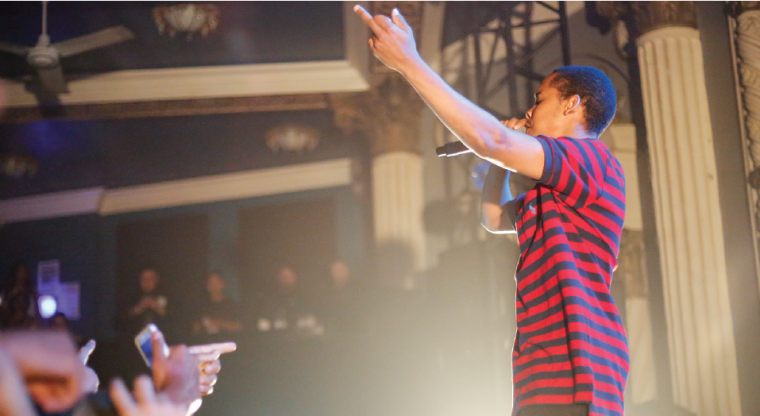 The bouncers at the Metro on Oct. 15 were not amused. Their sul- len attitudes and apathetic frowns stuck out among the armies of excited and inebriated teen boys who flooded the lobby, the largest crowd the 1,150-capacity venue could have possibly held. With their elbows out and flashlights on, security guards were ready for the unruliness about to ensue. Thebe Neruda Kgositsile—er, Earl Sweatshirt—had finally come to Chicago.

Since the mischievous 13-piece rap collective’s formation in 2009, the SoCal rapper has been Odd Future’s dark horse, which otherwise features iconoclastic emcees such as Tyler, the Creator, Frank Ocean and Hodgy Beats. As seen on his 2010 mixtape, EARL, the then-16-year-old hit a new level of hip-hop notoriety by weaving intricate lyricism, poly- syllabic flow and vivid poetic im- agery about murder fantasies de- livered with conversational poise.

But as soon as Odd Future’s fame grew, Earl vanished. He was inexplicably missing during the crew’s formative years, his presence gone from their live shows, festival slots and solo albums. After a whirlwind of investigation, it was found that his mother had shipped him away to a Samoan retreat for at-risk teen boys to correct his misbehavior. The words “Free Earl” began appearing on T-shirts and laptop stickers nationwide.

After his 2012 liberation, Earl’s Doris was finally released Aug. 20, which discusses issues with his AWOL father, the struggles of making it in Los Angeles and how his relationship with his mother went astray, casting the word-whiz in many shades with an unmatched flow, showcasing his growth as a multifaceted 19-year-old emcee and juxtaposing his depth against Odd Future front man Tyler, the Creator’s blatant rape rhymes. Now, Earl is finally on tour to support his first studio album, and the fans at the Metro could not have been more elated.

As the clock ticked past 8:30, anticipation grew along with the pungent stank of body odor, cheap cologne and illegal substances. Vintage Wu-Tang Clan and Ice Cube tracks blasted across the house; the stage empty besides a turntable, a huge inflatable cartoon head of Earl and a banner that had the finger-printed word “DORiS.”

Since most Doris tracks feature additional artists such as Mac Miller, Tyler, the Creator and Frank Ocean, Earl only performed short clippings of his verses, which explains why the all-ages show was cleared out before 10 p.m. However, Cali rapper Vince Staples provided much-needed support for Earl; they were able to perform their torrential collaborations like “Centurion” to the fullest, often confidently clos- ing the tracks sans music, allowing the emcees to show off their dexterous lyricism and vocal innovation. Delivering rhymes double time and improvising new lyrics added a shocking disbelief that these kids have years worth of talent, but are not even old enough to drink.

Although Doris bears the sounds of vintage SoCal gangsta rap, laid-back and chilled out, the live show’s energy was anything but. As Earl performed his more menacing, bass-driven tracks such as “Hive,” Earl showcased a low-key swag as he circled the stage, putting life to the song’s eerie monotonous drone. “Promise Heron I’ll put my fist up after I get my d–k sucked,” he recites the first words of the song, spurring a can of worms full of delectably flippant lyrics. The crowd expressed its enthusiasm by stirring faster, forming a black hole in the center of the pit where people would wildly pull each other by the neck of their shirts and slam bodies down to the floor. Attempting to bring a beer back to the pit quickly became a $6 puddle on the floor.

The crowd’s misbehavior seemed to complement Earl’s goofiness, as though he was performing a show with and for his peers.

Alternately, during his more introspective tracks such as “Chum” and the rumbling lost-love ballad “Sunday,” the crowd stood motionless. The stillness in the room allowed his words to swim through the venue, pushing through the audience’s stoned heads adding new depth to the words. He rhymes on “Sunday”: “I’m f—-n’ famous if you forgot/ I’m faithful despite all what’s in my face and my pocket/ and this is painfully honest.” Then the chorus hits, where he shook his head admitting “all my dreams got dimmer when I stopped smokin’ pot.”

Between songs, Earl maintained a silly banter with the audience, asking them to join him in admit- ting their past Lil Bow Wow phase and introducing the audience to his mom from the balcony. Once, he shrieked, “Damn, it’s getting hot in here!” which cued Taco to play the obligatory Nelly, “Hot in Herre” track. Audiences fed into the frenzy, tossing their clothes onstage, prompting Vince to yell, “Why you gotta throw your shoes onstage? That’s nasty, don’t you need those for later? Keep your clothes on!”

Throughout the hour-long show, it was a thrill to watch Earl perform a set with both incredible talent and relatability, a sign of an emcee yet to be tainted by the evils of self-indulgent fame. When the show came to a close, Earl let house music play as he, Vince and Taco posed for pho- tos in front of the audience, signing autographs and shaking hands with the front row. Then the rambunctious flocks of pubescent boys ran to their idol in the lobby, like an after school meetup of mischievous friends past.