Chicago hits deadliest day in over a decade 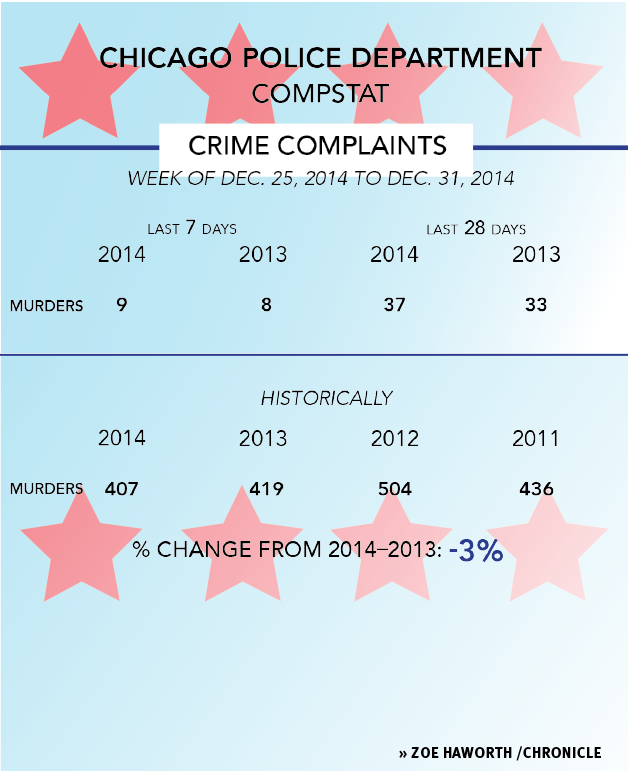 On Sept. 2, Chicago notched the highest number of deadly shootings in a single day for the first time in more than a decade with nine gun-related fatalities. Murder rates had been down by more than 13 percent since 2014, according to Chicago Police Department statistics, but the spike in violence disturbs many Chicagoans working to combat it.

The Englewood neighborhood has been especially hard hit in recent years. Twenty-nine students of its area’s Harper HighSchool were shot–eight of them fatally–during 2012-2013.

“These kids don’t have a choice,” said Englewood resident Deonte Tanner,  a 2013 HHS graduate and valedictorian, Tanner won the Bill and Melissa Gates Foundation Millennium scholarship, earning him a full ride to Marquette University in Milwaukee.

“They see people carrying guns and selling drugs,” Tanner said. “They don’t see anybody going straight home and [studying]. It’s hard to see [positive influences] when the violence is foreshadowing everything else. Growing up in [Englewood], you become accustomed to [violence],” Tanner said. “Shootings and killings are the norm in this neighborhood. If we went a weekend without [violence], it would be a surprise.”

Kathy Buettner, director of communications at Cure Violence—an organization that approaches violence as a public health issue that can be aided by the help of a community and its members—said she believes there are three steps in the public health model: identify and interrupt violence before it occurs, work with individuals whose behaviors indicate violent tendencies and shift community norms to assert that violence is not an acceptable approach to the solution.

“Many of the shootings are acts of retaliation to another shooting,” Buettner said. “There is another way we can talk this out. We can mediate things as opposed to picking up a gun.”

Buettner, who has worked for Cure Violence for more than a year, said the solution to saving lives and changing culture is to have credible messengers in the neighborhood where violence occurs.

“If you’re going to change a culture, you cannot change it externally,” Buettner said. “You have to go in and be in that culture. Someone like you or I couldn’t do that. We need credible messengers who are people from those communities who have walked in their shoes before.”

Some organizations use love and compassion as the ultimate tool of success in the face of violence rather than a communal approach to  lowering the statistics of violence in Chicago.

Mothers Against Senseless Killings, an organization comprised of women primarily in Englewood, fights to keep children safe by conducting events like patrolling 75th and Stewart streets with the goal of preventing gun violence while creating a community.

Everloyce McCullough, a grandmother and longtime Englewood resident, is a MASK member and said she believes love, compassion and understanding can change a community overrun by violence.

“When we started patrolling the streets, people looked at us suspiciously [questioning] ‘Are they the police?’ because that’s the mentality [in Englewood],”

McCullough added that people responded positively after realizing MASK was serving to help Englewood, as well as the City of Chicago, with an empathic approach.

“They’re routinely being called thugs, gangsters or [told] their lives are worthless,” McCullough said. “We treated them like people, and guess what? They responded like people.”

There were no shootings in Englewood last Fourth of July weekend, while in the past, it is usually the weekend when the most violence occurs in Chicago, according to McCullough. She said she believes MASK contributed to the drastic shift of a decreased violence in Englewood.

“These kids have been dehumanized and made to feel as if they’re nothing,” McCullough said. “In a lot of instances, our communities are criminalized—even the good kids. You have to embrace everybody by engaging them and interacting with them. If we’re going to have any impact, we’re not going to put up barriers—we have to actually embrace them and then they ultimately think, ‘They’re just like us.’”

Tanner said he agrees with McCullough’s approach to treat the potential violent residents of Englewood with love and respect, as well as instilling ambition that will ultimately change their lives, as well as their community as a whole.

“These kids can’t see certain things, so they can’t dream it either,” Tanner said. “It’s so crowded with people saying they can’t do this or they won’t become this. But if he or she can dream, they can make it out. I just ask the kids a simple question: Do they want to be a product of the environment or a service to it? A service would be making a difference, being a difference. There’s an alternate victory in their