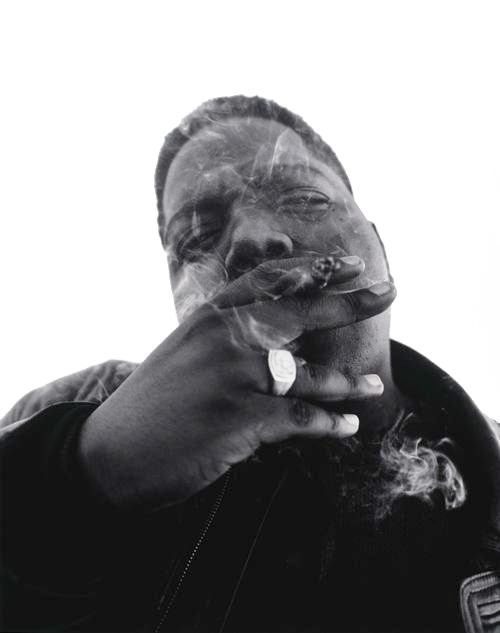 Peanut butter and jelly. Batman and Robin. Jordan and Pippen. Hip-hop and marijuana. There are just some things that are incomplete without the other.

You have probably seen posters in the dorms of Notorious B.I.G. posing with a huge blunt in his mouth, smoke pouring out. Rappers’ stages draw more skunk-smelling clouds than a quiet indie band might. Just listen to most of the hip-hop playing on the radio and it will not be long before you hear a reference to lighting up.

Rap was not always like this. In fact, the very first drug references in rap music addressed the negative consequences of drug use, not the fun parts. In the ‘80s, Public Enemy’s “Nights of the Living Baseheads” raps: “The problem is this—we gotta’ fix it/ Check out the justice and how they run it/ Sellin’, Smellin’/Snifflin’, riffin’,” and Grandmaster Flash’s “White Lines”: “My white lines go a long way/ Either up your nose or through your vein/With nothing to gain except killin’ your brain.” Both were written as rap ballads decrying the use of crack and cocaine

It was not until the early ’90s that music icons began to glorify drug use. Dr. Dre promoted marijuana use with his album The Chronic and Cypress Hill’s “Stoned is the Way of the Walk,” reached triple and double platinum status, respectively. Their success on the charts showed that pot sells, and two of the current Top 10 songs on the Billboard Hot 100 list from the week of April 19 feature lyrics that portray marijuana in a positive light.

Denise Herd, an associate professor of Behavioral Sciences at the University of California, Berkeley School of Public Health, said she wanted to monitor references to substance abuse in rap lyricism because she noticed it was becoming more frequent.

“I was aware that there was lots of alcohol advertising with rappers,” Herd said. “In the back of my mind I asked myself, ‘Are prominent rappers advertising alcohol? Is there more alcohol in their music? Is the alcohol being accompanied with drugs?’”

Herd’s study, “Changes in the Prevalence of Alcohol Use in Rap Song Lyrics: 1979–1997,” analyzed 341 of the most popular rap songs from the time period and searched for lyrics that glamorized or endorsed the use of illicit drugs. Herd and an assistant both reviewed each song, noting drug references and terms specific to drugs, selling drugs, paraphernalia and altered mindsets associated with drug use. They recorded the number of mentions as well as a verbatim transcription of each drug reference. As Herd predicted, attitudes toward drug use have become more permissive in recent years and are prevalent in various social contexts.

In her findings, marijuana was the most frequently mentioned drug in rap music and had a nearly 200 percent increase in recent mentions compared to songs from 1979–1989. The number of songs that framed drug use in a negative light decreased by more than 70 percent, whereas the number of positive drug references increased by nearly 400 percent.

So is it possible that increased exposure to positive lyrics about marijuana is likely to raise the rate of use among listeners?

In a January 2013 study published in The Journal of Health Communication, Michael Slater, professor of arts at Ohio State University, and a colleague explored the prospective effects of music-related media content on youth alcohol, cigarette and marijuana use.

The authors suggest that the effects of music-related media, especially music videos, on introducing young viewers or listeners to drugs can be identified by whom they hang out with and whether their peer groups used drugs.

However, after surveying 8,155 students across the U.S., the results showed that marijuana references in music alone would not lead to marijuana use until adolescents started hanging out with drug-using peers. The study suggests watching music videos independently may not initiate use, but if a friend had been using, it could spur the initial use.

Slater said he was not surprised to learn that the influx of marijuana-related lyrics and images in hip-hop lowers young listeners’ fears of the potential consequences of getting high.

“That would be a plausible hypothesis,” Slater said. “If kids are moving into groups with use norms, and use media that reflects those norms, [it could be] quite a troublesome [duo].”

This can be concerning for some, especially parents.

“My son is 13 and I’m looking around at the middle school age group and I’d say a lot of children start experimentation with drugs,” Herd said. “He used to just watch videos, now all the sudden he is plugged into music, [which is] a part of their world.”

Jim Derogatis, a lecturer in the English Department and host of Sound Opinions, a nationally syndicated talk show, said he thinks regardless of media exposure, rap isn’t that influential on youth.