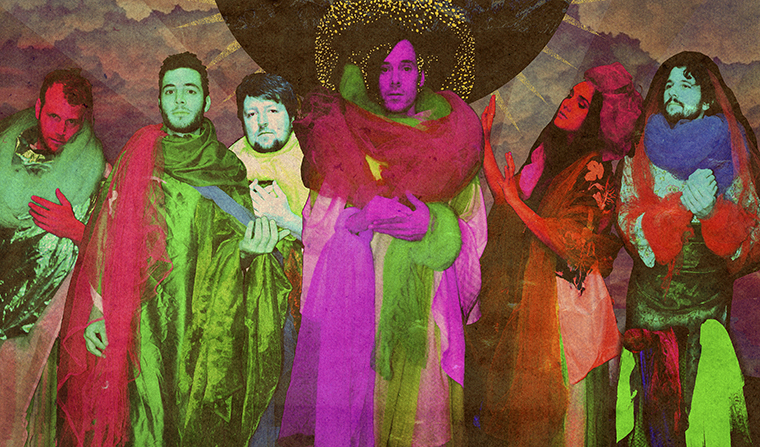 Like The Beatles on acid, of Montreal is simultaneously jarring yet soothing, acting as a curious vessel for the meandering and shocking narratives frontman Kevin Barnes delivers in his trademark murmurs, shrieks and falsettos.

The subject of “The Past Is a Grotesque Animal,” a Kickstarter-funded documentary scheduled for release June 24, Barnes is an enigmatic and eccentric leader who has guided his band through more than 18 eclectic years, including 12 albums, several lineup changes and countless flamboyant live shows in which Barnes has performed completely nude or in a 10-foot dress adorned with hallucinatory projections and everything in between. They have also gone on to work with Grammy-nominated producer Jon Brion and have made a few peculiar commercial appearances, including the infamous Outback Steakhouse parody in 2006 that attracted both recognition and ire from fans in the indie world.

Since their original formation in Athens, Ga., of Montreal has spanned genres from vaudevillian twee-pop and acid-soaked electronica to glam rock and funk. Barnes is behind their newest incarnation, a unique take on Rolling Stones-esque ‘60s–‘70s psychedelic Americana Lousy with Sylvianbriar, released last October after he left the Deep South for San Francisco and went into isolation.  Lousy with Sylvianbriar eschews the glittery and psychedelic synth of their past few releases and returns to the band’s simpler roots, with the largely acoustic, more organic sound recorded on the analog 24-track in Barnes’ home studio.

The Chronicle spoke with Barnes about the band’s latest record, its upcoming documentary and

THE CHRONICLE: Why did you move to San Francisco to write Lousy with Sylvianbriar?

KEVIN BARNES: I’m not really sure what motivated [me] besides just wanting to get out of my comfort zone and go somewhere that sounded sort of exotic. I didn’t really know that many people, but I knew enough people that I wouldn’t feel completely alienated in the new environment. [I] just sort of wandered around and spent a lot of time by myself and in my head thinking of ideas. I did a lot of reading, writing and all that, [and it was] cool to be focused, to have nothing else going on other than writing. I think it inspired me because I was sort of romanticizing the concept of San Francisco and the important cultural movements and events that happened there over the decades, [thinking] about the beat generation, the feminist movements, gay rights movements and all the important events that went down there. It’s a very culturally diverse city as well. There’s so much ethnic diversity and cultural diversity and all these new places to discover, [whereas] in Athens, Ga., it’s a small town and there is not much mystery there. I’ve been [in Athens] so long that I kind of know everything, so it was cool to be in some new place that I could just go explore.

CC: Montreal has had a revolving lineup. How does it feel to be the mainstay?

KB: It’s cool to not have to answer to anybody because I’m very restless, creatively speaking, so it’s hard for me to really be attached to people in that way. I kind of need to be free to make decisions to help me go in different directions and realize

CC: Your lyrics seem to fluctuate between personal and fictional. Why?

KB: I think if you only write about yourself and your personal life it feels maybe a bit narcissistic, but I think it’s inevitable that there will always be some aspect of your personal life or your personal emotions or whatever coming through, even if you write about something that would seem like fiction. I guess I made a decision early on that I wanted songs to be directly connected to my personal life and to reality, but I’ve gone through phases—like early on where I kind of got some bad reviews, and so I freaked out and [thought], “Well, I don’t want to put any of my personal life in there ‘cause it makes me too vulnerable.” Then I’ve come back around to writing from a more personal perspective over the last six or seven records. If you write from a personal standpoint, it’s likely to have a more timeless quality because you’re writing about universal themes that everyone can identify with.

CC: How do you choose a set from your discography?

KB: I’m happy [the older records] exist, but they don’t make any sense to me anymore. They came from a part of my psyche that’s either in hibernation or in a coma or dead. I don’t identify with them anymore, but the songs from the last six or seven records I still identify with, and it doesn’t seem foreign at all to play them. As far as putting a set together, it’s usually just a matter of thinking about what would be fun to play, what would feel good to play or would be therapeutic to play.

CC: Tell us about the upcoming of Montreal documentary “The Past is a Grotesque Animal.”

KB: It’s basically done. I think that now it’s at the point of postproduction, [going through] color correcting, making sure the sound is solid throughout and little things like that. It just got picked up by [Oscilloscope Laboratories], so it’ll have a decent distribution. [The documentary] is not so much about the music. I had no real involvement with the way it was edited or put together or directed or anything, so it’s definitely not my project. It’s probably more about me and [my] personal relationships over the last 15 years or whatever, more so than the music and the live shows and the artwork and things like that. It’s more behind the music.

CC: How do you go about selecting the visuals to accompany your music?

KB: Growing up I always had a strong connection with albums and album art. Whenever I hear a song I instantly have the album cover in my head if it’s a classic album that I loved. It’s a weird thing just staring at the album cover while you’re listening to the album and having that really strong memory connection with the music. I always wanted the album covers to have some presence of their own but also to feel like a visual embodiment of the spirit of the record. The new record [with] the motorcycle on the hill represents a sort of wildness and freedom because I was reading Hunter S. Thompson’s book [“Hell’s Angels: The Strange and Terrible Saga of the Outlaw Motorcycle Gangs”] when I was writing the record. [The] motorcycle represented, in the ‘60s and ‘70s, that sort of outlaw culture. The record, to me, is sort of hearkening back to that time period [and] it seems to be a sort of icon for that time period.

CC: What are some album covers that made a strong impression on you growing up?

KB: Well a big one is the Prince album Sign o’ the Times where he’s on the cover with his big, kind of like Randy glasses or whatever, looking very androgynous. That one, and also the cover of Lovesexy. Prince album covers I’ve probably stared at the most, just because he was so serious and perplexing—this strange, androgynous, beautiful creature that was so talented and so versatile and different; each record he was a completely different person. Same with David Bowie; [I spent a lot of time] staring at the cover of The Man Who Stole the World and Ziggy Stardust and Low.

CC: What is next for you and of Montreal?

KB: I started work on a new record and we’re talking about getting together in a country house out in Tennessee this summer, so basically just sort of collecting ideas and chasing different [inspirations] and trying to find some spark to create a new wave for me artistically. I think I have actually discovered it, but I don’t really want to talk about it yet because it’s sort of in this vulnerable state right now. I just keep looking and keep touring. We have a lot of shows happening over the next couple months. We’re going to Europe; we’re going to Moscow in June, which is the first time we’ve ever gone out there.

Lousy with Sylvianbriar is currently streaming on PolyVinylRecords.com as of press time. of Montreal will perform at Lincoln Hall May 16. “The Past is a Grotesque Animal” is screening at the Music Box  June 23.