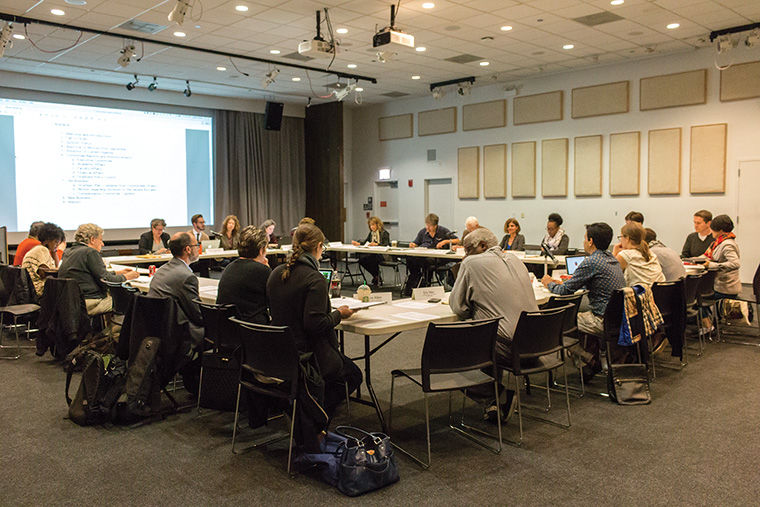 Faculty Senate discussed the response to life insurance cuts and the goal to make pay raises more accessible at its Oct. 14 meeting

Jeanne Kelly, assistant director of the Office of Services for Students with Disabilities and dean of students, attended the meeting, held at Stage Two in the 618 S. Michigan Ave. Building, as a guest to speak about how to accommodate disabled students in the classroom.

“The diversity of the disabilities and the complexity has increased, so you are experiencing a classroom [with] students that may be providing you greater challenges than you’ve had in the past,” Kelly said.

The Senate also discussed the effects of recent life insurance benefits cuts. The payments made to beneficiaries in the event of an employee’s death were cut for fulltime non-union employees from 3.5x the employee’s annual salary down to 1.5x, as reported Sept. 26 by The Chronicle. Greg Foster-Rice, an associate professor in the Photography Department and Faculty Senate president, criticized how the cuts were communicated. The announcement was made in a Sept. 12 email from Columbia’s Office of Human Resources, as reported Sept. 26 by The Chronicle.

“I want to recognize the negative impact the initial communication had on faculty, both in terms of morale and [in] financial planning,” Foster-Rice said.

Foster-Rice noted the administration had responded to issues raised by faculty. Following a Sept. 19 meeting with top administrators, an email was sent to faculty Sept. 21 addressing the concerns, as reported Sept. 26 by The Chronicle.

“There was surprise at how strongly the faculty reacted,” said Beth Davis-Berg, associate professor in the Science & Mathematics Department.

“There was an assumption that this was going to be taken as a minimal change.”

Foster-Rice said it appeared faculty benefits would continue to be a conversation topic in the future.

“I feel secure in knowing we’re going to be more involved in the accountability and options for any future decisions,” Foster- Rice said. Performance-based raises, another issue discussed among faculty, was addressed by Keith Kostecka, an associate professor in the Science & Mathematics Department. He said the Senate’s Compensation Committee’s goal was to make performance-based pay raises more fair and inclusive and make pay raises available to all faculty.

In a Feb. 12 Faculty Senate meeting, performance-based salary raises were discussed, with a motion passed regarding eligibility, as reported Feb. 15 by The Chronicle. It was recommended that Senior Vice President and Provost Stan Wearden change the eligibility to include all faculty members. The eligibility guidelines excluded faculty members below the level of associate professors and full-time lecturers, as well as faculty that received raises after May 2015, according to Foster-Rice.

“I’m hoping this work is going to set a standard,” Hall said. “Morale is going to be better at this college; right now, it’s still not good.”