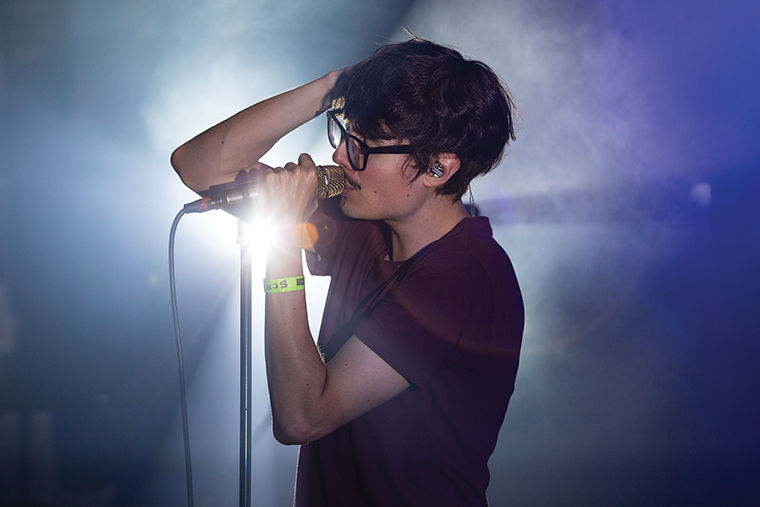 After its debut studio album How Do You Feel Now?  was released in April, the band embarked on “World Tour USA 2015,” which includes a show in Canada. The album tracks consist of unexpected sounds such as noises from a Jet Blue flight and samples from some of Disney’s classic cartoons like “Peter Pan” and “Fantasia.”

The band got a boost in its fanbase after collaborating with the electronic band Big Data on the song “Dangerous.” The song reached No. 1 on the Billboard Alternative Songs chart in August 2014.

The Chronicle spoke with Brenner about Joywave’s debut album, their performances on live TV and its use of Disney cartoons.

THE CHRONICLE:What inspires your band’s sound?

PAUL BRENNER: Me, Dan [Armbruster] and Joe [Morinelli] have been playing in bands together since we were like 16. As we grew older, we played in various local bands in Rochester, [New York], where we grew up. As we grew up, we started to listen to different kinds of music. At one point, our ex-bass player had kind of a mid-20s crisis, and he was like, “Guys I can’t do this anymore.” He left and we thought that was the perfect opportunity to change our band name, reinvent our sound and make music that is Joywave—music that we, as adults, would listen to. It’s not that we were ashamed of the music we were making before, but it’s something to be much more proud of.

How would you describe your music to someone who has never heard it before?

That’s a question we always talk about just as a band, and I think we’ve collectively settled on electronic-based rock music. If you listen to our studio album [through] a pair of headphones, it’s very much like an electronic ambient sort of band with rock influences. If you come up to see a live show, you’ll see a lot more of the rock part because we have live drums, guitar, bass—the whole band—set up. It’s two different experiences if you listen to the album versus coming to see us live, but we try to keep it cohesive. We have a hard time fitting into categories.

Joywave is the first band that was allowed to use samples from Disney’s classic cartoons in their songs. How do you surpass that achievement?

I’m not sure. I think hopefully [we will] continue to keep using Disney classics in our music. We were very fortunate we were able to do that, and it definitely turned out great.

Do you have plans for a second album?

Currently, no, I do not believe so. [Armbruster] is constantly writing, but I think the focus right now is to continue touring and working on the current album.

How was it working with Big Data?

That was definitely a boost for our band and for Big Data when the song “Dangerous” started to do so well. As far as the collaboration goes, Big Data is actually [Armbruster] and Allen [Wilkis]. They would get together when they could in the city and play music. I don’t think either of them had intentions of Big Data doing anything tangible. They called it a little Internet band. “Dangerous” started doing so well on the radio that [Wilkis] was like “Hey, I’d like to put a band together and make this a thing.” [Armbruster] was very busy with Joywave at the time, so it kind of retroactively became Joywave featured on “Dangerous.”

You’ve performed on “Jimmy Kimmel Live” and “Late Night with Seth Meyers.” What was that like compared to playing a regular live show?

It’s hard to put those performances into words. I can speak for all of us when I say we were so excited to be there. It was like a dream come true to be on national television. It’s very different because when you’re at a live show, you’re in a setting that’s more like a party atmosphere, and everyone’s dancing and having a good time. When you’re playing those late night shows, whether the audience likes you or not, I believe they’re required to applaud you.

You all wore matching pink suits on “Jimmy Kimmel Live.” What made you choose that particular look?

We chose the pink suits because we wanted to have an impact, whether it be on TV or on the YouTube comments section for the video. We just wanted to stir some things up, and it definitely did. We all have a good laugh reading through the YouTube comments of some of the more ignorant people on the Internet. It’s fun to get a rise out of people.

Do you have any advice for aspiring musicians or bands?

My advice personally would be, if it’s something you truly want to do with your life and make a career out of, then it’s absolutely crucial that you do not give up, and you work hard. It really comes down to that because over the last six years, we’ve been through it all. If a single one of us had ever thrown in the towel, we wouldn’t be where we are now.