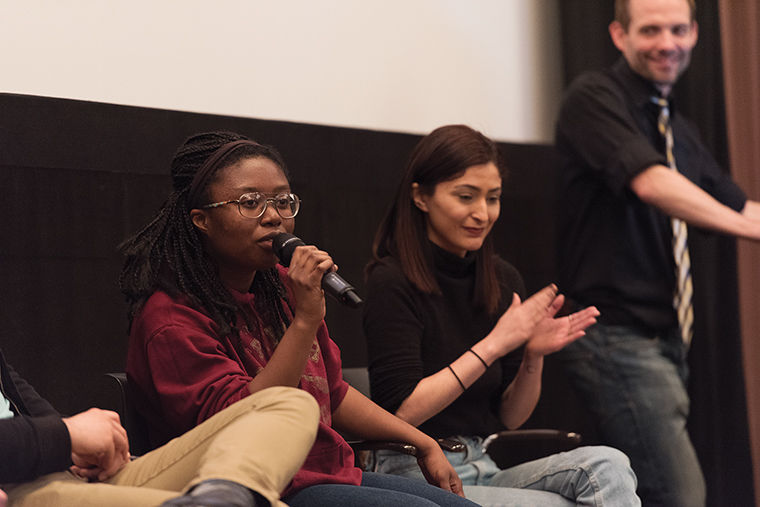 Bree Bracey (left), a sophomore theatre major and panelist for “The National Epidemic is Our Epidemic: Rape on College Campus” discussion, brought the conversation of campus sexual assault to the DocYourWorld collective.

Student filmmakers displayed their creativity at the fourth annual “DocYourWorld” student-produced event May 3–4 at Film Row Cinema in the 1104 S. Wabash Ave. Building.

“DocYourWorld” is an interdisciplinary course taught by Teresa Puente, an associate professor in the Communication and Media Innovation Department; Eric Scholl, associate chair of the Television Department; and Ruth Leitman, an assistant professor in the Cinema Art + Science Department. The course unites students and faculty of various departments to form a collective that promotes creativity with nonfiction.

The collective had existed independently of the course until this semester and featured a series of screenings, panels and discussions linked by the theme “Anti-Identity,” about types of identities such as gender and musical identity. Student filmmakers displayed their work about exploring and challenging their own identities as well as those of others. Panels of content creators discussed concepts of identity with the audience.

Ben Rifken, a senior television major in the course, said the biggest challenge of working with fellow students was staying on track without derailing progress from an overabundance of ideas.

“It was great to see everyone mesh so quickly,” Rifken said. “People took a heavy interest in each other’s projects.”

Eve Studnicka, a senior cinema art + science major in the course, said she coordinated the event and reached out to filmmakers to find work that aligned with the theme.

“You get a sampling of what is available to students in terms of nonfiction at Columbia,” Studnicka said. “What’s great about that is that it’s boundless. You’re able to explore experimental art forms and unexpected, challenging ways of telling stories from the real world.”

Scholl said the course, launched for the Spring 2016 Semester, was a result of a discussion spanning the last three years and through departments in the School of Media Arts. He said this discussion also led to the idea of having an interdisciplinary documentary major within the Cinema Art + Science Department, which was approved by the Faculty Senate at its Dec. 11 meeting, as reported Dec. 14 by The Chronicle.

“Students are interdisciplinary by nature,” Scholl said. “They don’t see the divisions between departments that are set up. [Those departmental divisions] don’t make any sense in terms of creative cross-pollination.”

Rifken said he participated in a project, which was displayed at the collective, examining virtual reality’s growing popularity.

“It has been a huge experience every step of the way,” Rifken said. “It doesn’t matter what background people come from at Columbia. When you are coming together to plan an event, it is easy for everybody to work together.”

Rifken said he and his group were able to capture a political conversation between a Texas Sen. Ted Cruz supporter and a Vermont Sen. Bernie Sanders supporter in a coffee shop.

Siletzky said she was able to screen her own piece for the event, entitled “Tuba Piece.” She described the piece as a radio documentary with live performance, which focuses on a professional tuba player from Chicago whose music plays through speakers as his story unfolds to address issues with his identity as a tuba player.

“Tuba is often perceived as a silly instrument—it’s two-dimensional,” Siletzky said. “[The subject of the documentary] is a deep, intellectual musician. I’ve been calling it a live performance biographical radio documentary. It is like a 3D audio experience.”

Siletzky said she was exposed to different methods of creating documentaries, and her piece was her way of pushing the boundaries of documentary.