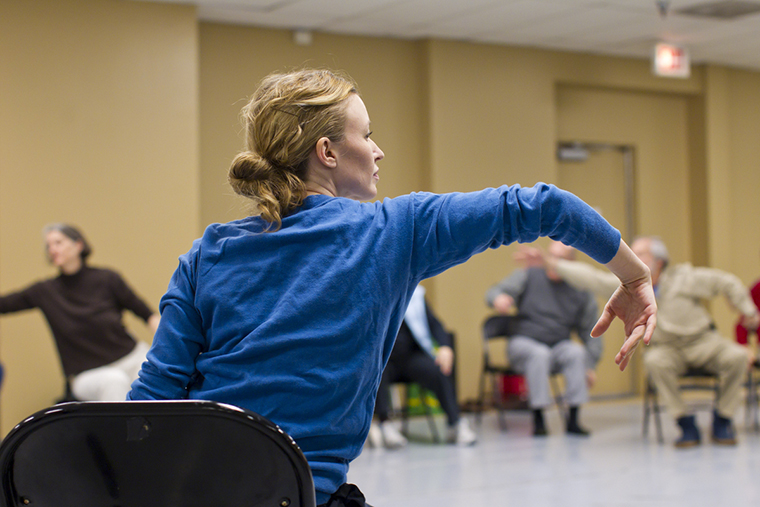 The Hubbard Street Dance Center in Chicago has been conducting adaptive dance classes since 2007 with the Parkinson’s Project, which was designed to ease symptoms of the disease and provide an opportunity for students with disabilities to dance. Above, Parkinson’s Project founder Sarah Cullen Fuller instructs a class of elderly students.

A Chicago dance studio is pioneering new techniques to give children with disabilities a new outlet for expression.

Five weekly hour-long pilot classes for the program will begin in June 2014 and integrate Hubbard Street’s long-running Parkinson’s Project into its new Adaptive Dance program. Full sessions are scheduled to begin in the fall.

Kathryn Humphreys, director of Education, Youth and Community Programs at Hubbard Street, said the new programs come after more than a year of discussions between members of an advisory committee at the studio. She said the need for the curricula became apparent through Hubbard Street’s work in Chicago Public Schools as part of its Movement As Partnership and Focus Schools Initiative programs.

“We were inspired [by] what we see in the classrooms in the schools and the need for it,” Humphreys said. “We have students coming through our program [who] could use such classes [as well as] staff members who have children with these issues who are looking for classes all the time.”

The MAP and FSI programs pair dance instructors with children with and without special needs. The lessons combine dance with academic subjects such as English and science, according to Columbia graduate student and Hubbard Street Teaching Artist Cheryl Olendzki. She said her path to becoming a dance therapist was the result of her seven years of teaching at Hubbard Street and in the integrated classrooms.

“I had a student who was a selective mute,” Olendzki said. “She had trauma in her past and stopped talking. To see how she came out of her shell and how movement provided her a different way to communicate was really meaningful to me and was one of the driving forces in getting my master’s.”

Humphreys said the programs are designed for students with autism to address their needs.

“Students with autism and physical disabilities spend a lot of their time in therapy or feeling that they can’t participate,” Humphreys said. “To know that they are welcome and that this will be made comfortable for them and for their parents … creates a level of comfort and a feeling of normalcy—just signing up for a class like kids do.”

Changes to Hubbard Street’s existing programs include a structured visual schedule that is easily understood by students and a higher teacher to student ratio of three adults for every eight students.

“We’re going to have a very structured class [that] will fit the needs of autistic children, starting with Brain Dance, which is based on developmental movement patterns [that] help to reorganize the body and create connections in the central nervous system,” Olendzki said. “While they’re gaining new movement skills, they’re hopefully feeling that joy of dancing, of moving, that many of us experience in a dance class.”

Although Hubbard Street’s program is purely meant for student growth, some professionals have found that movement and dance can be an effective therapy for individuals with autism.

Joanne Lara, president of nonprofit Autism Movement Therapy  based in Van Nuys, Calif., said she has been using dance to provide children with autism an avenue for self-expression since starting her organization in 2007.

A former professional dancer,  Lara taught children with special needs in the Los Angeles Unified School District for 10 years before she developed the Autism Movement Therapy Program. Lara teaches AMT workshops throughout the U.S., including her very first at Hubbard Street in 2010, she said.

Her program coaches dance instructors on how to work with students with autism.

Lara said she has seen her students with autism improve their cognitive processes through dance.

“Language is a big plus when you’re working with movement and music because you’re working with audio processing, motor visuals and imitation,” Lara said. “That requires the entire brain to step up to the plate. What we see is speech and language on the left side of the brain begin to kick in—it’s activated.”

According to Lara, dance can also improve social and behavioral issues. Even for children higher on the autism spectrum, she has noticed her program has made major differences.

Humphreys said Hubbard Street’s programs are not necessarily meant to be therapeutic but are intended to provide an outlet for anyone interested in dancing.