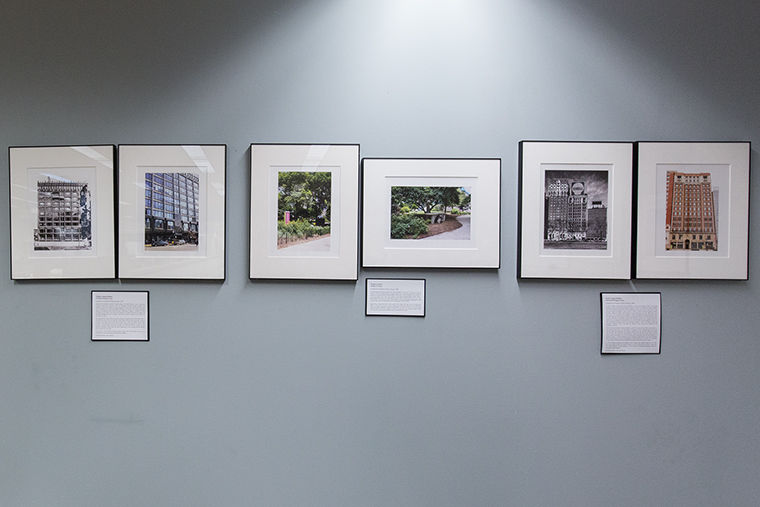 The “Creative Properties: Columbia’s South Loop Sidewalk Campus Since 1977” exhibit, located on the second floor of the library, located at 624 S. Michigan Ave., gives Columbia a glimpse of how it became part of the South Loop through historical and current photos of the buildings.

Students in this semester’s “Public History: Presenting and Interpreting the Past” course gathered on the second floor of the library, 624 S. Michigan Ave., for the Dec. 9 opening of the students’ exhibit, “Creative Properties: Columbia’s South Loop Sidewalk Campus Since 1977.”

The exhibit features both past and current photographs of the campus buildings, along with brief descriptions of the background of each facility.

The building—completed in 1907—was considered a skyscraper, even though it was only 15 stories tall, he said. Ruffolo said the window design, stone detailing and marble in the lobby remain unchanged from the time of the building’s construction.

Ruffolo said his photographs illustrate the building’s evolution and the contrast between the intense environment of the present day and the quieter city of the early 20th century.

“You walk around and  you think it is just a school, but there’s a lot more hidden within the walls,” Ruffolo said. “The story is within the bricks.”

Erin McCarthy, acting chair and associate professor of the Humanities, History & Social Sciences Department who teaches the course, said students collaborated with the College Archives & Special Collections for the exhibit.

McCarthy added that the exhibit builds off the “From Adams to the South Loop: 1890 to 1977” exhibit, which opened in the fall and featured research from McCarthy’s Summer 2015 “Public History: Presenting and Interpreting the Past” course.

“Our focus shifted a bit,” McCarthy said. “In general, there was more information on these buildings because we were going back to the mid 1970s. We talk about Columbia purchasing the buildings and the creation of a South Loop campus. Those themes were not present in the first half of the exhibit.”

McCarthy said the exhibit’s themes included the growth of the college, the acquisition of buildings, the creation of the South Loop’s campus and the college’s use of its  various properties.

Melissa Nuti, a senior design major who researched the Residence Center at 731 S. Plymouth Court, said the building was originally erected as a publishing facility for Lakeside Press.

“There’s still creative energy that exudes from each of these buildings,” Nuti said. “Even though they had different prior uses, there was creativity fostered within them long before [Columbia] was ever in them.”

“We do not see a lot of that history today, so it is nice for the students to be exposed to it,” he said.

Kelsey O’Connell, an archives and catalogue assistant in the library, said the project relates to the archivists’ jobs because the archivists collect and preserve information that builds upon the college’s historical data.

“The buildings’ histories come off as lackluster because Chicago has a rich architectural history,” O’Connell said. “What we see in the individual histories of the buildings Columbia operates out of is a strong connection to the city and the city’s history and  the creative nature of the college.”