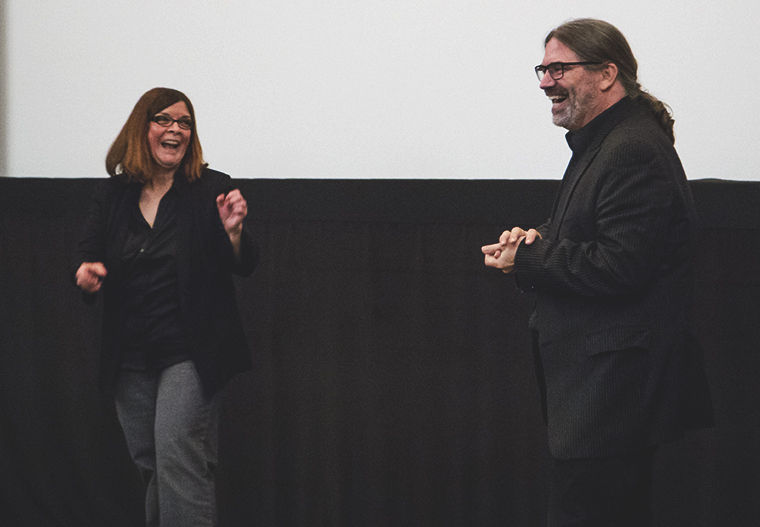 Nancy Rourke, the ASL deparment’s artist-in-residence, spoke about her art and activism work in the deaf community on Sept. 22 at 1104 S. Wabash Ave Building., coinciding with International Deaf Awareness Week, which takes place during the last week of September.

Coinciding with International Deaf Awareness Week, the college welcomed artist-in-residence Nancy Rourke to campus for an exhibit of her paintings and a lecture on being an “artivist” in the deaf community.

Rourke’s exhibit was displayed in the 33 E. Congress Parkway Building, and her lecture was held Sept. 22 at Film Row Cinema in the 1104 S. Wabash Ave. Building. Both the lecture and the exhibit occured during International Deaf Awareness week, which takes place annually during the last week of September, according to the World Federation of the Deaf.

Rouke said the American Sign Language Department invited her to hold an exhibit and  give an in-depth explanation of her work for the college community and the larger deaf community.

“I think that [my work] really pertains to deaf culture as well as their education courses here,” Rourke said.

Rourke, who was born deaf, said she transitioned in 2010 from being an artist who happened to be deaf to an artist who made work about the deaf experience.

“I am an activist who happens to be an artist, so I am an ‘artivist,’” Rourke said.

Rourke has since joined Deaf View/Image Art, known as De’VIA, an art movement in the deaf community that started in 1989. Within De’VIA, there are three different categories of art, Rourke said—affirmative, resistance and liberation.

“I have been involved in the De’VIA world for five years,” Rourke said. “[De’VIA] has truly inspired me and is why I continue to be an artivist.”

Rourke said the exhibit of her work at the college ranges from her early days as a De’VIA artist to the present.

In her paintings, she uses red, blue, turquoise and yellow to represent different aspects of the deaf experience, with certain colors representing things like power and the journey of deafhood, Rourke said during her lecture.

She also spoke about motifs used by herself and other De’VIA artists in their work, like an elephant used to represent  historical figure  Alexander Graham Bell and blue tape to represent audism, the form of prejudice against deaf people.

The kinds of artistic representations Rourke spoke about are the focus of deaf art and culture classes at the college, noted Ally Young, a junior American Sign Language major.

During her time as an “artivist,” Rourke said she has been inspired to create pieces based on issues the deaf community faces.

One of Rourke’s pieces, “Twelve in 1989,” was dedicated to 12 deaf children who had died from complications of cochlear implant surgery.

“[The painting] incorporates 12 black flags to honor the children who had died,” Rourke said. “I needed to use their tragedy in my work.”

Another project Rourke discussed during her lecture was working with several deaf inmates in a maximum security prison in upstate New York, who did not have access to resources like video phones or interpreters at the prison.

“We taught them how to express emotions through art,” Rourke said. “One person still goes every month, and they set up workshops for the deaf prisoners. Now the deaf prisoners are making beautiful murals on the walls.”

Rourke also spoke about how the deaf experience translates into her work as a De’VIA artist.

A junior American Sign Language major, Jennifer Sproule, said she was interested in learning about that translation.

“It is so amazing to see a deaf artist take their work and make that their main focus—the struggle of being deaf,” Sproule said.

“To be an interpreter, you have to mediate culturally as well,” Kjelland said. “If you further understand deaf culture you will be a better interpreter.”