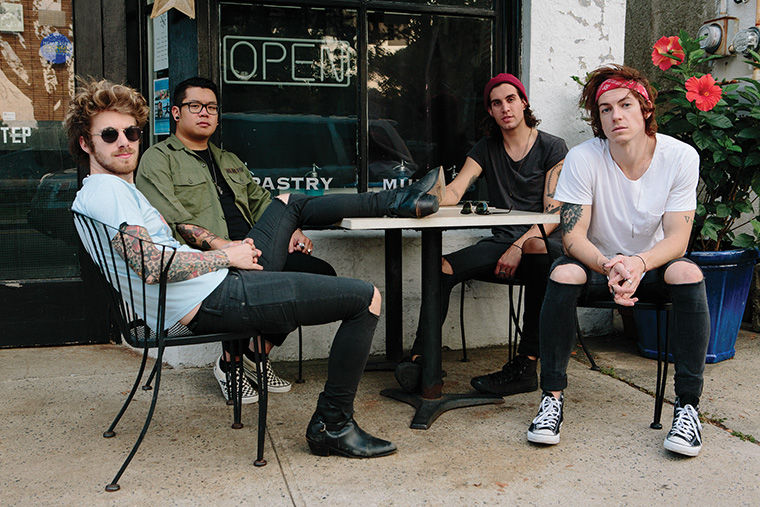 Young Rising Sons lead singer, Andy Tongren (right), said guitarist Dylan Scott (left) came up with the name for the band when he was at Disney’s Magic Kingdom.

New Jersey rock quartet Young Rising Sons has released three EPs since signing with Interscope Records and Dirty Canvas in 2013. Andy Tongren fronts the band on lead vocals and guitar and is joined by Dylan Scott on guitar, Julian Dimagiba on bass and Steve Patrick on drums.

Paticularly successful was its self-titled EP released in July 2014. The EP comprises four tracks,  including “High,” which hit No. 1 on Hypem Twitter. The song was also featured on multiple television networks including FOX, ABC and NBC.

Young Rising Sons has toured and played shows with Weezer, The 1975, The Neighbourhood and Halsey. Its upcoming “Let the Kids Riot” headlining tour starts Oct. 28 in Santa Ana, California. The band will play songs from its new EP, The Kids Will Be Fine, released Oct. 16.

Young Rising Sons will make a stop at Double Door Nov. 10. Tickets are available online and at YoungRisingSons.com.

The Chronicle spoke with Tongren about the band’s collaborations, its new EP and its plans for a full-length album.

THE CHRONICLE: How did Young Rising Sons begin?

ANDY TONGREN: [Scott, Dimagiba and Patrick] had been playing together for around 10 years, and they were looking for a singer about six years ago. I was playing an acoustic open-mic night in New York City, and they happened to be there. They approached me afterward and asked me to come play with them. I came down, and we practiced and instantly became best friends. [Scott] actually ended up cutting my hair that night. It was kind of instant chemistry.

Where did the name Young Rising Sons come from?

We’ve kind of gone through a few cycles, I suppose. A couple years back, we were ready for a face-lift. [Scott] was at Disney and as he was walking into Magic Kingdom, [the name] just popped into his head. I don’t really know where it stemmed from, but we were able to incorporate it into one of our songs: “Red & Gold.” It wraps up what we’re all about. We really identified with it.

Who has been your favorite artist to tour with so far?

That’s a hard question. Each tour is kind of similar to summer  camp. The first day is feeling each other out a little bit—everybody’s a little awkward for the most part and by the end, everyone’s almost in tears about leaving each other. It’s such an honor to tour with the bands we’ve toured with. It’s impossible to pick one. We’ve been very fortunate to share the stage with some very talented people.

Are there plans for a full-length album?

Yeah. We’ve kind of been continuing the creative process. We don’t really stop. When we’re on the road, it’s hard sometimes to write because we’re focused on playing a show every night, but we definitely keep the ideas flowing. We’re always writing and recording. The plan is definitely [to have] a full-length [album] sometime within the next year—probably mid-spring—but we’ll see. We’ve got a lot of new music on top of the EP we just released that we’re excited about.

What is your favorite song on the EP?

It’s tough to choose. I think “Somebody” is my favorite. It’s one that sums up our band. It’s about friendship and being there for the people you care about, and that’s what we’re all about as a group of friends and as a band. We try to pass that down to our fans and create a real family environment.

What are you most looking forward to on your upcoming tour?

There’s a lot to look forward to. Since we signed with Interscope [Records], we [were] on the road nonstop. It was about a solid year of touring, and since July, we’ve had time off to be home. We haven’t been playing shows for a bit, so I’m excited to get out there and see our fans again and play some new songs for people. We’ve been playing them for a while now, but to have The Kids Will Be Fine EP out, it gives people the chance to embrace these songs, connect with them and learn the words. I think that will be very powerful. It’ll give people a chance to sing along when we’re playing. The most rewarding part of being a musician is playing a show and having that connection with your fans who are singing the words back to you. It’s a really special thing.

What are you most excited to do while in Chicago?

I love Chicago; It’s one of my favorite cities. I regrettably have a gluten allergy and can’t eat deep dish pizza, which just kills me, but I sometimes cheat. I know for all the other guys, that’s the first thing on their list. When people think of major cities in the U.S., the first places they think of are New York City and L.A., and they both have very distinct feels, but Chicago has its own identity, which is really cool. It’s just a good vibe there.