Columbia Core: Where are we now? 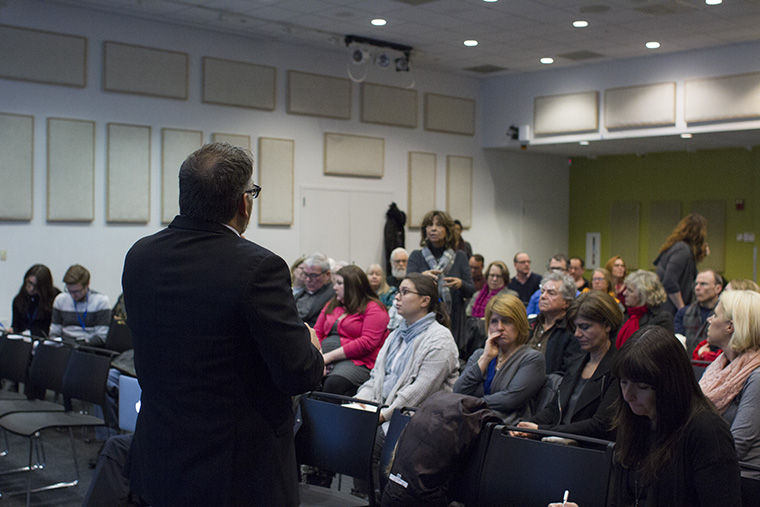 Faculty, staff, students and administration voiced their suggestions at the Core Curriculum Assembly held Feb. 8 in the Stage Two auditorium.

Faculty, staff and some students gathered Feb. 8 at the Stage Two auditorium in the 618 S. Michigan Ave. Building to discuss the next phase of revising Columbia’s curriculum: planning the Core.

Steven Corey, interim dean of the School of Liberal Arts & Sciences and chair of the Columbia Core Committee, led the presentation and announced that no final decisions had been made regarding the Core Curriculum, a set of non-major requirements that all students must complete before graduation.

“We are in conversation. The committee has been talking,” Corey said. “This is the first event on campus for the larger campus community to have an engaged conversation.”

The presentation, which was followed by a Q&A session for attendees to voice suggestions and concerns about the Core Curriculum’s progress, was held in the wake of the college’s disbursement of a draft of the new Universal Learning Outcomes.

The ULOs, a set of skills to be embedded in part in every course of study, were  drafted by the Universal Learning Outcomes Strategic Plan Implementation Committee in December. They are undergoing review in light of incoming comments, but were made possible Feb. 8.

According to Corey, the Core Committee has discussed a number of ideas, including the relationship of the Core Curriculum to the Universal Learning Outcomes, majors, minors and other academic programs; how students would navigate the Core Curriculum and the creation of a flexible and transfer-friendly curriculum.

Members of the college community can send suggestions about the Core Curriculum via email to ColumbiaCore@Colum.edu.

Corey also said the committee looked to some of the college’s competitors and other higher education institutions, such as the Association of American Colleges & Universities’ Liberal Education America’s Promise campaign and the Lumina Foundation’s Degree Qualifications Profile materials to begin planning the Core Curriculum, which will be proposed by May 27.

According to the email, the ULOs are divided into eight areas of knowledge, including communication, ethics, civic engagement, collaboration, creativity, career management,diversity and global fluency, and critical and analytical thinking.

Wearden said in a Feb. 11 emailed statement that the Core committee will collaborate with all academic units to preserve the college’s liberal arts tradition but also expand it to the other two schools.

“The [Columbia] Core Curriculum Committee recognizes that a school’s spirit is more than the sum of its curricular parts,” Wearden said. “The [committee’s] vision is not to reduce the college experience to a series of checked boxes and forms. A successful core provides students with opportunities for personal exploration and artistic, intellectual and academic growth, which [lie] at the heart of the [Columbia] experience.”

Corey said the Core Curriculum’s proposal will be examined by the administration before approval.

“We’ve been doing research and talking, but we’re really interested in hearing what other members of the college have to say,” Corey said.

Tony Trigilio, interim chair of the Creative Writing Department, said he hopes the Core Curriculum will include courses from different departments outside of the School of Liberal Arts & Sciences.

“[We should] think about when a student sits down to the Core and what’s in front of [them] with the Core requirements—to try to help them see it as a part of their journey through Columbia rather than just ‘Well, I gotta take this course. It looks cool and it’s at 2 o’clock on a Tuesday,’” Trigilio said.

Diana Vallera, president of P-Fac, Columbia’s part-time faculty union, and an adjunct professor in the Photography Department, voiced her concerns about the research the ULO  Committee has been using, which comes from the Lumina Foundation, an educational consulting group, and Kent State University, where Wearden was formerly dean of the College of Communication and Information.

Vallera said Kent State’s mission does not reflect Columbia’s. Vallera said she is also worried a new core could become too standardized and would frustrate experimentation.

Ramona Gupta, coordinator of African-American Cultural Affairs within the Office of Multicultural Affairs, emphasized that the room was full of faculty and staff and recommended the college assembly reach out to more students to participate.

“It does not seem that there has been much or any outreach to students,” Gupta said. “If the student voices aren’t present in this conversation, we’re not hearing them and understanding what they value in the Core, so what’s the point?”

Louis Silverstein, an associate professor in the Humanities, History & Social Sciences Department and chair of the College Assembly, said the absence of students results from their grueling schedules, which leave them little or no time for anything but school and work.

“We have an issue—not just in terms of this assembly—but how do students come to believe that these kinds of [decisions] that will affect their lives are important enough to take the time [from] their very busy schedules,” Silverstein said.