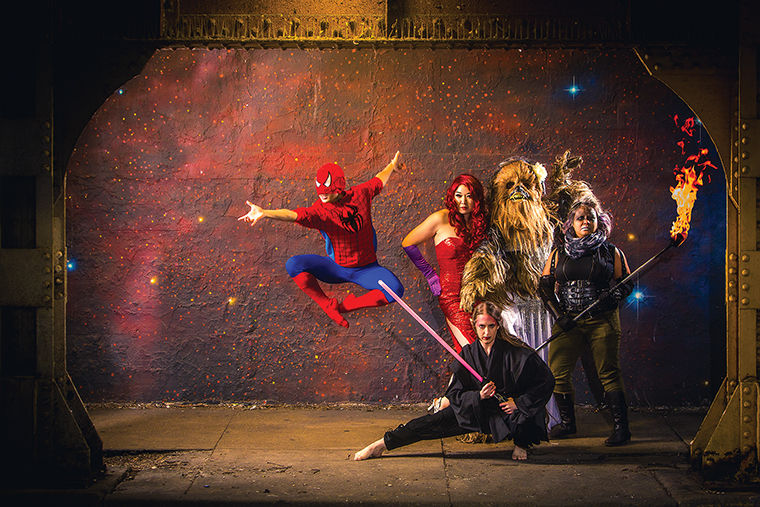 “All of us are pretty big nerds who have a huge love for various characters and franchises,” said Dawn Xiana Moon, Raks Geek founder.

“Star Wars” and “Star Trek” fans do not typically agree on much, but a Wookiee dancing to a song performed by a Klingon band might just be enough to finally bring them together.

Chicago residents will get the chance to fulfill their geeky fantasies Nov. 12 and 19 when Raks Geek is scheduled to perform a full-length geeky belly dancing show at MCL Chicago, 3110 N. Sheffield Ave., where dancers dress up as sci-fi characters.

Raks Geek was founded in 2012 by Dawn Xiana Moon, who had been a belly dancer for years and was working with dance company Read My Hips.

Moon said her dad raised her on all sorts of science-fiction stories, and she has been a “huge nerd” her entire life. She said she started Raks Geek because she wanted to combine geek culture and belly dancing.

“I went to Google and looked up ‘geek belly dance,’ and I was horrified at what came up,” Moon said. “For the most part, the things I was finding were people who were having fun but [weren’t] good in terms of technical skill or artistry.”

Raks Geek became well-known after a video the troupe made went viral. The video featured a person dressed as a Wookiee, a species from the “Star Wars” franchise, belly dancing to an original song in the Wookiee language, Shyriiwook, performed by a band of Klingons, an alien race from the “Star Trek” franchise.

“When [the video] went viral, I was in Italy traveling, and people on Facebook started telling me, ‘I think this is your group, this thing I’m seeing all over the Internet,’” Moon said. “I looked it up and it was. Overnight, it went from having a couple hundred views to thousands.”

The dancers with Raks Geek include Moon, Lee Na-Moo, Kamrah and Gaea Lady, who perform alongside fire-spinner Michi Trota. Moon said Raks Geek’s members have performed and taught dance all around the world.

Kamrah, whose given name is Amy Vidrine, said she started belly dancing in 2001, and in 2009 she became a professional dancer. She added she moved to Chicago in 2012 and started dancing with Raks Geek .

Vidrine said she contacted Moon about joining the group and was not in the show at first because it was full, but she was eventually able to convince Moon to let her perform with the company.

She said she was already interested in combining geek culture with belly dance before joining Raks Geek.

“I already had a geeky belly dance piece, which was the ‘Silent Hill’ nurse I’m known for now,” Vidrine said.

She said she will probably perform her “Silent Hill” nurse piece at MCL Chicago along with a new “Lord of the Rings” elf piece she has been preparing.

Moon said there will be a mix of different dance and flow art pieces at the MCL Chicago shows.

Both performances at MCL Chicago will be 75 minutes long and feature dancers as well as Trota, the group’s fire-spinner. Vidrine said MCL Chicago does not allow real fire in their space, so Trota will use glow sticks instead.

“We did talk about having fire in the  space, but we felt with the small confines of what the space is that it just wasn’t safe,” said Michael Jordan, managing director and publicity manager at MCL Chicago. “The risk was just too high for something to go wrong.”

MCL Chicago, a BYOB venue, focuses on different forms of music comedy, but also hosts other types of humor, Jordan said. He added MCL Chicago has not yet hosted any belly dancers in its space.

“We’ve never had a show run like the one Raks Geek is doing where it is a full hour and 15 [minutes] of this type of performance,” Jordan said. “That kind of stuff usually gets represented in a smaller fashion, like as an opener for a bigger portion of a show.”

Vidrine said anyone who is into “geeky stuff” will enjoy the show.

“It’s a good show that’s very audience-friendly,” Moon said. “It’s fun and doesn’t take itself too seriously, but at the same time, everything you’ll see is done really well.”

Tickets for the performances are $20 in advance and $25 at the door. Visit MCLChicago.com for tickets and more information on other MCL Chicago shows. More information on Raks Geek can be found at RaksGeek.com.