Drug intervention for brain injury, dementia link may be effective 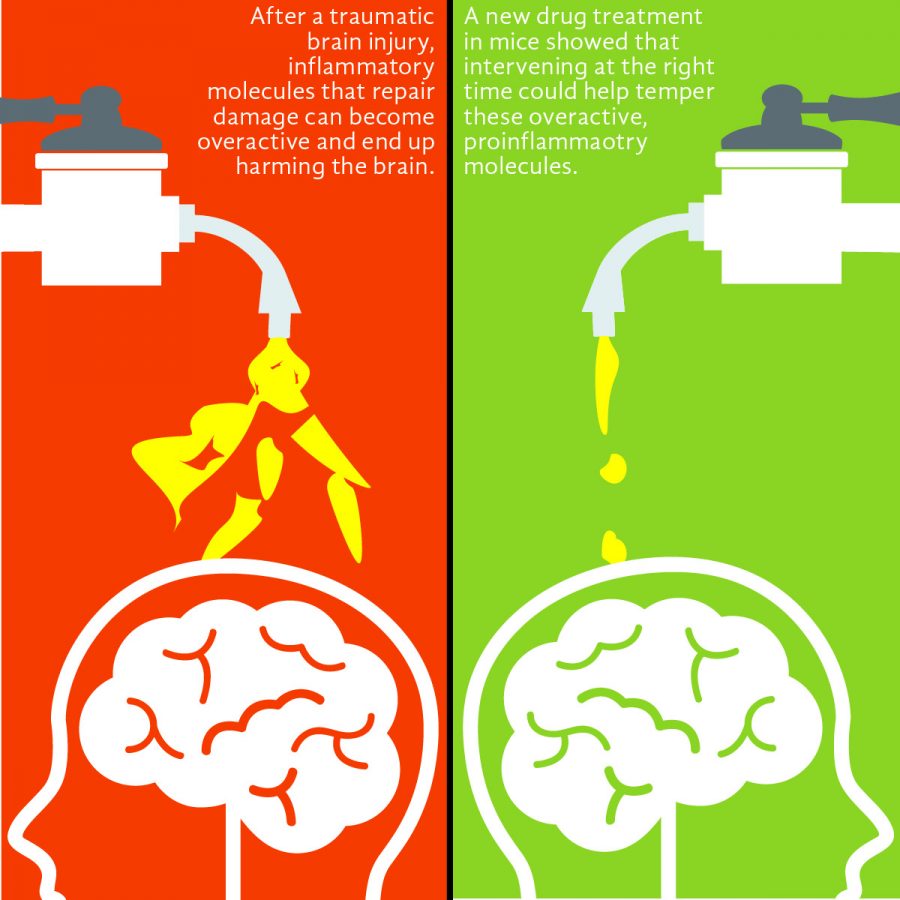 Drug intervention for brain injury, dementia link may be effective

Despite the jargon-packed mouthful it is, the term “chronic traumatic encephalopathy”—a progressive degenerative brain disease associated with concussions—has become a significant talking point in the sports world in recent years. An increaseing amount of research is being published that solidifies a link between brain injury and the development of dementia-related disease.

In an April 22 paper published in The Journal of Neuroscience, researchers documented the effects of drug intervention on mice a week after they sustained traumatic brain injuries (TBI). After a three-week regimen, the experimental group no longer showed signs of mental decline, as opposed to the control group, whose memory and cognition continued to deteriorate.

The study aimed to explore the series of events that occur in the brain after an injury through the use of the drug, according to Linda Van Eldik, co-author of the study and director of the Sanders-Brown Center on Aging and the Alzheimer’s Disease Center at the University of Kentucky.

“It’s been known for a long time that a prior head injury can increase the risk of other kinds of neurologic conditions, including dementia, neuropsychology problems, epilepsy and cognitive impairments,” Van Eldik said. “So there’s been a great interest in trying to understand why that is.”

Van Eldik said when someone sustains a head injury, cells called glial cells, as well as other non-nerve cells such as astrocytes and microglia, are stimulated. This recruitment of cells causes inflammation in the brain, which has been shown to be an important mechanism in TBI and Alzheimer’s. Once activated, the glial cells function similarly to immune cells in that they flock to the site of the injury to begin producing molecules that, ideally, should take care of the problem and repair the damage before leaving well enough alone. However, if an injury is too damaging, sustained too many times or for too long, the balance of that inflammation can tip over and become harmful.

“If it’s not kept in check, then you have sort of runaway inflammation,” Van Eldik said. “That seems to be what’s happening in chronic diseases like Alzheimer’s where you keep having those inflammatory stimuli around as the pathology in the brain develops. In cases of TBI you have an immediate insult that causes a surge of these pro-inflammatory molecules which, if they’re not kept in check, can lead to damaging responses.”

Why this inflammation persists—overstaying its welcome to the point that it causes cognitive damage in the brain—is still unknown to researchers and is an exciting question, according to Adam Bachstetter, co-author of the paper and a scientist at the Sanders-Brown Center on Aging.

“One idea is that it’s because you’re recruiting cells that aren’t normally found in the brain,” Bachstetter said. “So immune cells that are in our blood, and after the injury these cells are being drawn into the brain and since they’re not normally there, they’re [contributing] to processes that are detrimental.”

Bachstetter said that MW151, the drug treatment used in the mice, was designed to suppress the overactivation of cytokines, the small proteins that signal between immune cells and are believed to promote inflammation. What sets MW151 apart is it is counted among the 2 percent of drugs that are able to cross the blood-brain barrier, enabling it to temper the overzealous cytokines but not interfere with them at their basal levels.

“When we gave the drug in a certain time window, this suppressed the inflammatory response,” Bachstetter said. “[The mice] didn’t develop the injury-induced deficits in learning and memory.”

Van Eldik said when combating chronic disease, determining when to intervene is difficult.

“When is the inflammation good and when is it bad?” she said. “You don’t want to just intervene with a strategy that dampens down all of the glial [cell activity]. You only want to be able to target the inflammation that’s driving the pathology, not that’s trying to repair things.”

Bachstetter said the team still wants to know how long the drug effect actually lasts and whether or not stopping treatment would mean the mice abandon the cognitive function that was rescued. A compound similar to MW151 has been used in a small human study and was well-tolerated, according to Van Eldik.

“We’re actually trying to move these discoveries forward,” Van Eldik said. “Not just define what’s going on, but to take that knowledge of a potential mechanism and see if we can develop a therapeutic in the future.”

Although research conducted using animal models is a far cry from being applicable to people, some of the principles at work may be promising for future treatments, according to Kristen Dams-O’Connor, an associate professor of rehabilitation medicine at Mount Sinai Hospital in New York.

“[This paper] seems to suggest yet another explanation for this common finding that TBI in older adults, particularly those who already have a neurodegenerative process at play, is going to have poor outcomes,” Dams-O’Connor said in emailed statement. “What is exciting is that this paper begins to provide very preliminary evidence that at least some of these effects may be modified by anti-inflammatory medications.”