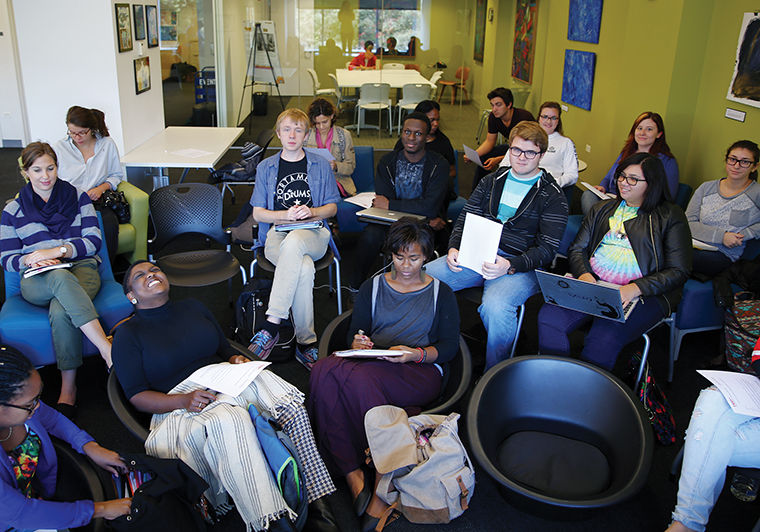 An information session was held Oct. 1 on the third floor of the library, 624 S. Michigan Ave., where students received applications to apply to be part of the student board.

A group of Columbia undergraduate students are working to bring TEDx, a community supplemental program of TED, the international conference series that explores topics related to technology, education and design, to the college.

Brontë Price, a senior photography major, is the lead organizer of the initiative. Nominated by a faculty member, she is overseeing the student-led push to bring TEDx to Columbia. Price said she has had a lot of experience organizing events on campus.

“TED Talks [has] ideas worth spreading, and since Columbia is an art school and is an innovative place for people, [TEDx] is a perfect match because we have a lot to say and big ideas,” Price, who organized a project in which trafficking victims expressed themselves through photography said.

TEDx events generally have a multi-disciplinary or broad theme relevant to the college or university hosting the event, according to the TED Talks website.

Price is leading the selection process of a student board. A group of 10 student chairs with up to five members on each chair’s individual team will be selected. Fall semester is dedicated to selecting members and organizing the beginning stages of bringing TEDx to Columbia, according to Price.

“Once we have our student board built, we can decide who’s who and then choose a theme for the event and find appropriate speakers,” Price said.

Price said private universities in Chicago, such as University of Illinois and Northwestern University, have hosted TEDx, causing some to view the talks as elitist. She said hosting an event at Columbia would dispel that misconception.

Phillip Cheng, a senior cinema art + science major, said TEDx will be positive for Columbia students to join and attend.

Cheng, who was brought onto the team by Price, said he jumped at the opportunity to bring TEDx to Columbia’s campus because of how it will look on his resume.

“Being attached to a name like TED is huge,” said Cheng, a creative director of Columbia’s show choir XC3ND. “Notable speakers have presented [making it a good career opportunity].”

Cheng mentioned that Columbia acts as a catalyst for creativity, which TEDx will further promote.

“[The point of] TED Talks is to spread knowledge and creativity, which is a major goal behind bringing it to campus,” Cheng said. “We’re an art school and a hub of creativity, so why aren’t we working with TED Talks already? Why haven’t we brought in people to spark new ideas?”

As of press time, the leadership board has not finalized any ideas for a theme, Price said. The work and decision-making will begin after the team is official, as announced at the information sessions.

Price also said it is still uncertain how many students will make up the completed team. Applications are being distributed and will be considered throughout October.

“We’re [going to] have to look at how many applicants we get and sort out where their skill sets lie,” Cheng said.

The leadership board has not decided whether it will be turning down applicants [who are applying for a chair or team position], Cheng said. TEDx is in the beginning stages, but the team has been impressed with the turnout thus far, he said.

Ava Ginsburg, a senior cinema art + science major and president of Students for Justice in Palestine, is also leading the initiative with Price. The two have since asked other students to join the leadership team, Price said.

Ginsburg said she met Price in a class called ‘Documenting Social Injustice,’ which helped lead to a potential theme for the event.

“The umbrella theme is art activism and social justice,” Ginsburg said. “We’re trying to get more specific and figure out which speakers to bring. Ideas [being considered are] the power of storytelling or what role media plays in creating social change.”

However, everything is still in the planning stages, Ginsburg said.

“We’re trying to build a foundational student board [to create a] leadership community and have students from marketing, finance, graphic design, et cetera, come together to bring this event to life,” Ginsburg said.

She said the application process is in progress, but anyone involved will be able to add the experience to their resume and have the option of counting their participation as an independent study for credit.

“[Joining the team] would be a tremendous experience,” Ginsburg said. “It’s going to be a lot of work and a big commitment because we will meet weekly, but we’re really committed to promoting social activism [on and off campus].”