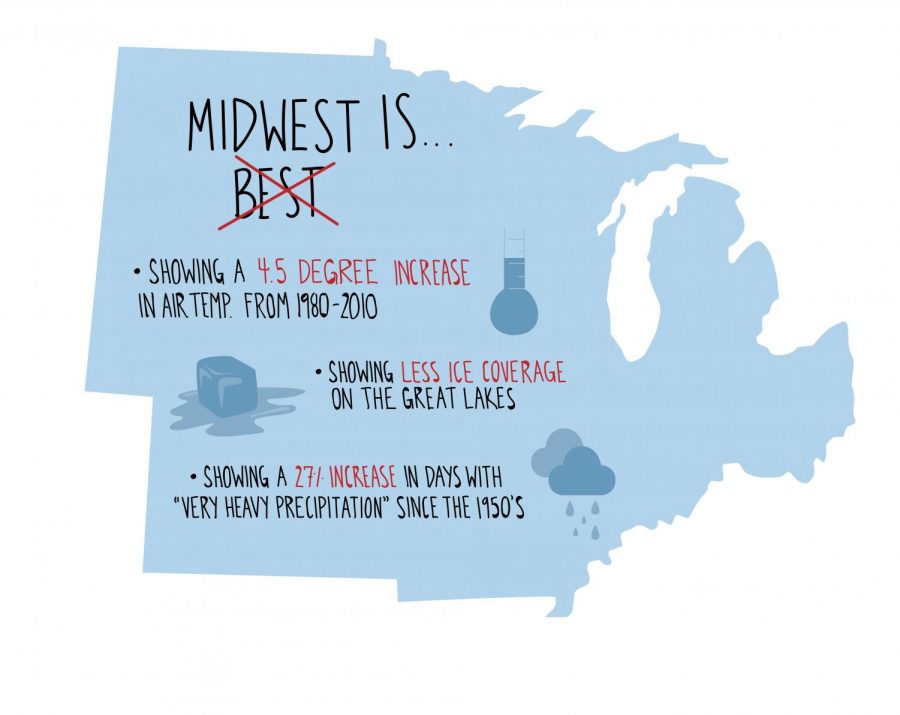 After the devastation of hurricanes Harvey, Irma and Maria on the nation’s southern coasts, Mary Craighead, transportation policy analyst at the Midwest Economic Policy Institute, said she saw a need to educate the Midwest about how climate change could damage the region.

Craighead authored the study “Climate Change and Its Impact on Infrastructure Systems in the Midwest,” released Oct. 10.

“We have already seen temperatures across the Midwest raise by 4.5 degrees since the 1980s, and the number of days with heavy precipitation have increased by 27 percent since the 1950s,” Craighead said.

According to the report, the Great Lakes have experienced less ice coverage, leaving lake shores susceptible to flooding and erosion. Rising temperatures reduce the life of asphalt, add stress to bridges and highways, and cause pavements and railways to buckle. Flooding weakens structural supports for bridges. All of this will increase maintenance costs.

In Chicago, flooding can block roads, hindering commuter routes, Craighead said. It is heartening to see that Chicago has had programs for years to combat climate change and enhance sustainability, such as the 2004 Chicago Sustainable Development Policy, she added.

Michael Berkshire, Chicago’s Green Projects administrator, said all new construction projects given financial assistance from the city have to meet sustainability requirements. While stormwater issues are a priority, he added that the city’s Climate Action Plan found that 72 percent of the city’s carbon footprint comes from energy use in buildings.

“Hopefully, we’re addressing our biggest environmental issues in Chicago,” Berkshire said. “If we are going to be serious about reducing our greenhouse gas emissions, we need to look at this.”

“If we could better deploy naturalized stormwater management, we might be better able to relieve some of the damage of climate change on gray infrastructure,” Pytel said, referring to hard infrastructure like sewers, or transportation systems.

Although Illinois and local governments are aware of climate change threats, Craighead said they are not enacting preventive initiatives fast enough.

“People who are affected by flooding understand [the problem], but I’m not sure they are connecting the increased flooding to climate change,” Craighead said. “Hopefully, state and local governments can keep moving forward and keep addressing this problem so we don’t get into trouble years down the road.”

Without considering the damage climate change can inflict on infrastructure, state and local governments do not have enough reserved funds to make required repairs to provide a safe and efficient transportation system, according to Craighead.

The funding gap between needs and estimated revenues between 2016 and 2025 for the nation already stands at over $2 trillion for national infrastructure systems.

Pytel said while Craighead’s report explains how climate change is going to affect governments, it does not fully represent the cost it will have on people.

Data from the “Prevalence and Cost of Urban Flooding” case study published in 2013 by the Center for Neighborhood Technology indicates 67 percent of the 27 ZIP codes in Cook County with the highest flood concentration damage earn below the average median household income for the county.

“It is one thing to look at solar panels and things that have technological environmental improvement—but when we look at climate and folks who are vulnerable to climate change, typically it is low income minority groups because they don’t have as much choice given where they are going to live,” Pytel said. “They are disproportionately impacted by flooding and other poor environmental quality.”