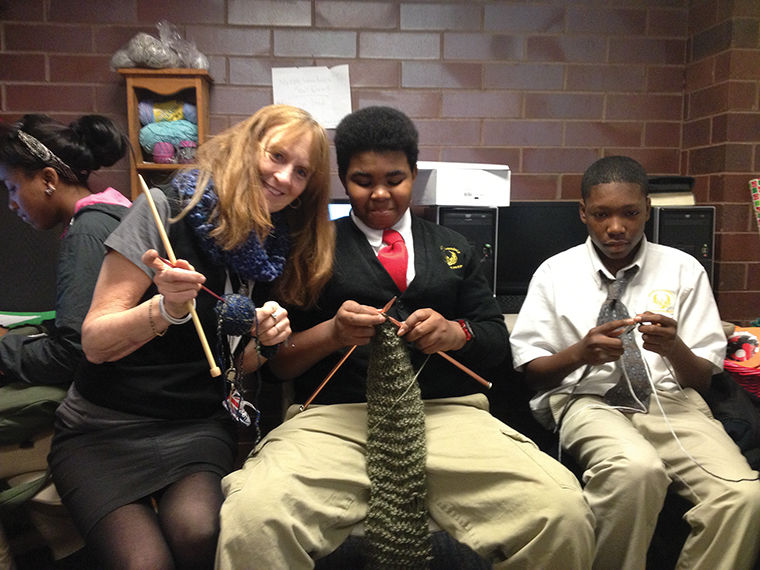 Chicago Public Schools teacher Dorothea Tobin, 62, started a knitting club at North Lawndale College Prep., which is not only an after-school activity, but a source of pride and income. Tobin said students have made up to $400 a month through selling their wares—such as bowties and scarves.

Tobin, 62, started the knitting club five years ago, and it has become one of the school’s most popular. Visitors to North Lawndale will see teachers proudly displaying their students’ work, wearing vibrant scarves and bowties adorned with the colors of the various colleges they attended.

Tobin, a veteran teacher with more than 30 years experience, said she first used knitting as an icebreaker for her homeroom class and discovered that once students were working with their hands, they were more than willing to speak their minds. A year later, she had the idea to pay for her students’ work out of her own pocket to then sell to friends and family at her church, St. Gertrude’s Parish, 1420 W. Granville Ave. Tobin said students have made up to $400 a month through the club.

The club, BT Lives in the Stitch, was suggested by students to honor her son, Billy Tobin, who died of an accidental fall in 2012. He was 19.

The Chronicle spoke with Tobin about knitting, the club’s origin and what the club has done for students at North Lawndale.

What motivated you to start the club and turn it into an enterprise for kids?

DT: It’s interesting to watch someone master something and do it. Then at the best of moments, it’ll be quiet and you know how it’s easier to talk and exchange when you’re doing something. I was never good at artificially saying, “We’re supposed to talk about this, would everybody jump in?” It was very hard. Yet, if you started knitting, it kind of happened. That was probably the initial motivation; it’s very motivating to have a group, and then you get to talk with them and listen to them talk. [The school] is on the West Side. Everybody would like to get a job or make some extra money, and it’s nice to have a real way. We’re making a genuine product and they get money out of it, and they need it. They can use it.

What do students get from the club?

DT: I can force expectations—kind of work habits. Kids have the experience of being part of a group and comply to what is expected out of you.

Would you say each student gets something different out of it?

DT: Definitely. Sometimes there have been kids that have more trouble complying with class and behavior, and yet they can sit there and knit and focus. They have a pride, “Well I can do this. I may not do well in class, but this I do well in.” You always are looking for something. Everyone is good at something, so let’s let them try a bunch of things. It’s something you can do with your hands and something fast. I like to see somebody [who] doesn’t fit the school profile succeeding. Another thing is watching social interactions. If someone is not necessarily an extrovert out in the regular setting and they’ll get a group in there and everything calms down and they’re talking and laughing, I love to see that. And other kids tell me that, “Oh it helps me, it calms me down. Can I take it home?” They’ll comment, “Oh, my aunt bought me yarn.” Their aunt is proud of them and is pitching in to see them succeed. Then we’ve had crazy things like somebody actually saved money for senior prom. They’ll say, “I took out my niece or nephew this weekend.” It’s very sweet.