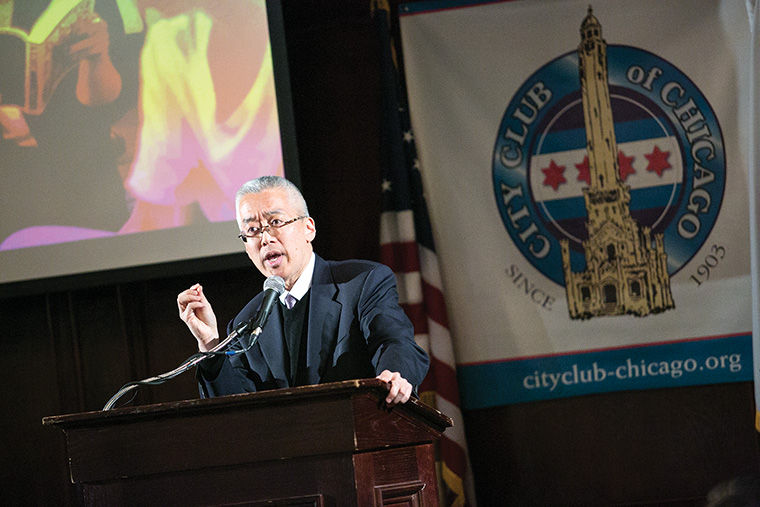 President Kwang-Wu Kim spoke to the City Club of Chicago to raise awareness of the college among the Chicago community at Maggiano’s Banquet Restaurant, 111 W. Grand Ave. on Nov 13.

To help raise Columbia’s profile and boost awareness among influential Chicagoans, President Kwang-Wu Kim delivered a speech at a luncheon hosted by the City Club of Chicago, a nonprofit and nonpartisan organization that provides forums for civic and public affairs in Chicago, on Nov. 13 at Maggiano’s Banquet Restaurant, 111 W. Grand Ave.

Along with prominent Chicago business and civic leaders, a large number of community members, students, faculty, staff, administrators and alumni attended the event, which mainly consisted of Kim discussing the college’s mission, goals and its desire for community partnerships.

Kim addressed several points at the event, which included the college’s curriculum, alumni, post-graduation success and most distinctively, diversity.

“Columbia College Chicago is deeply, deeply committed to the educational value of difference,” Kim said. “The more different perspectives we assemble, different ways of evaluating truth, different relationships to power, privilege and authority and make that the setting for our students’ exploration, the greater likelihood that they will be thinking about things they never thought about before. ”

In addition to discussing collaborative initiatives, Kim asked community members to visit campus and engage with students to better understand the college’s atmosphere and better identify with the college.

Although the college has emphasized the importance of fundraising through donor gifts and increased enrollment this academic year, Kim said the first step in accomplishing those goals is increasing awareness and developing relationships and partnerships within the community.

“I think there are a lot of misunderstandings,” Kim said. “Usually what people say is, ‘Oh, you’re that art school.’ That’s too small of a definition, and that’s why I’m trying to get people to think bigger about us.”

Anne-Marie St. Germaine, interim vice president of Communications & Marketing and a member of the City Club of Chicago’s Board of Governors, delivered the opening and closing remarks at the event in which she highlighted Columbia’s significance. She said in an interview with The Chronicle that the exposure from the event would benefit the college because community members will be more informed.

“It’s a prestigious forum,” St. Germaine said. “It is an opportunity for Dr. Kim to share with a new audience some information about his vision for Columbia College Chicago—what we’re doing, what we’re about and where we’re going.”

Stan Wearden, senior vice president and provost, said he hopes guests at the luncheon took away an accurate sense of the college’s mission and goals and have begun to recognize the impact the college has on the city.

“It’s wonderful that we’re getting this visibility but also this recognition of the vital role that we play in the South Loop and in the city,” Wearden said.

He said engaging with the community is vital because it helps connect what students are learning in classes to real-world experiences in Chicago and that each can benefit from the other.

“A college education is not just about what happens in the classroom,” Wearden said. “It’s also about the way the college is engaged in the community. It’s a way that we can give something to the community, but it’s also a way we can learn something from the community.”

Constantin Rasinariu, chair of the Science & Mathematics Department, said the benefits of the event include increased visibility and connections, adding that he thought guests took away a solid image of what Columbia is and where it is headed in the future.

“You do not exist if you are not known,” Rasinariu said. “Getting the message out with what truly Columbia is will help create a more coherent picture, recruit the right students for the college and [receive] success and growth for all of us.”

Sara Kalinoski, president of the Student Government Association and a sophomore science & mathematics major, said SGA attended the event to show support for Kim and help spread the college’s message. She said she hopes the outcomes of the event include increased awareness and more donors.

“It’s a great honor to get our school out there,” Kalinoski said. “Everyone knowing more about us and the new direction that we’re going into is very vital and important.”