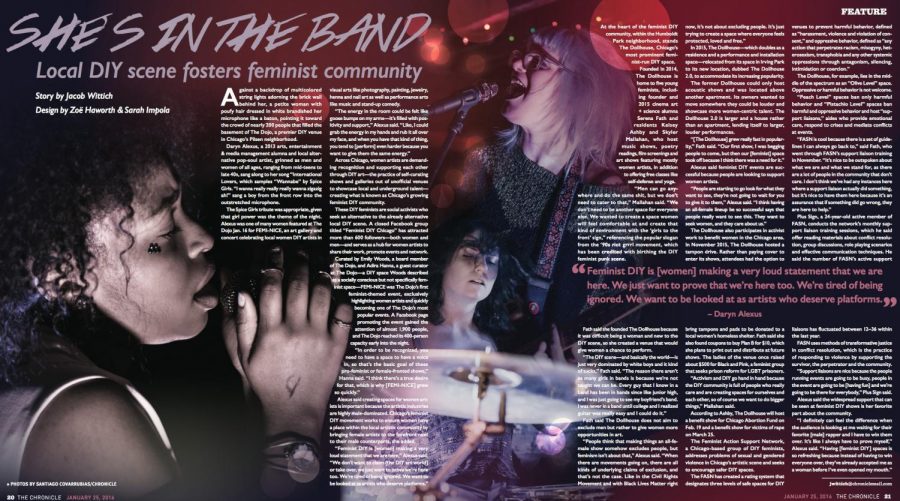 Against a backdrop of multicolored string lights adorning the brick wall behind her, a petite woman with poufy hair dressed in white brandished her microphone like a baton, pointing it toward the crowd of nearly 200 people that filled the basement of The Dojo, a premier DIY venue in Chicago’s Pilsen neighborhood.

Daryn Alexus, a 2013 arts, entertainment & media management alumna and local alternative pop-soul artist, grinned as men and women of all ages, ranging from mid-teens to late 40s, sang along to her song “International Lovers,” which samples “Wannabe” by Spice Girls. “I wanna really really really wanna zigazig ah!” sang a boy from the front row into the outstretched microphone.

The Spice Girls tribute was appropriate, given that girl power was the theme of the night. Alexus was one of many women featured at The Dojo Jan. 16 for FEMI-NICE, an art gallery and concert celebrating local women DIY artists in visual arts like photography, painting, jewelry, henna and nail art as well as performance arts like music and stand-up comedy.

“The energy in the room could be felt like goose bumps on my arms—it’s filled with positivity and support,” Alexus said. “Like, I could grab the energy in my hands and rub it all over my face, and when you have that kind of thing, you tend to [perform] even harder because you want to give them the same energy.”

Across Chicago, women artists are demanding recognition and supporting each other through DIY art—the practice of self-curating shows and galleries out of unofficial venues to showcase local and underground talent—creating what is known as Chicago’s growing feminist DIY community.

These DIY feminists are social activists who seek an alternative to the already alternative local DIY scene. A closed Facebook group titled “Feminist DIY Chicago” has attracted more than 600 followers—both women and men—and serves as a hub for women artists to share their work, promote events and network.

Curated by Emily Woods, a board member of The Dojo, and Adira Hanna, a guest curator at The Dojo—a DIY space Woods described as a socially conscious but not specifically feminist space—FEMI-NICE was The Dojo’s first feminist-themed event, exclusively highlighting women artists and quickly becoming one of The Dojo’s most popular events. A Facebook page promoting the event gained the attention of almost 1,900 people, and The Dojo reached its 400-person capacity early into the night.

“In order to be recognized, you need to have a space to have a voice in, so that’s the basic goal of these pro-feminist or female-fronted shows,” Hanna said. “I think there’s a true desire for that, which is why [FEMI-NICE] grew so quickly.”

Alexus said creating spaces for women artists is important because the artistic industries are highly male-dominated. Chicago’s feminist DIY movement works to ensure women have a place within the local artistic community by bringing female artists to the forefront next to their male counterparts, she added.

“Feminist DIY is [women] making a very loud statement that we are here,” Alexus said. “We don’t want to claim [the DIY art world] or take over, we just want to prove we’re here too. We’re tired of being ignored. We want to be looked at as artists who deserve platforms.”

At the heart of the feminist DIY community, within the Humboldt Park neighborhood, stands The Dollhouse, Chicago’s most prominent feminist-run DIY space.

“Men can go anywhere and do the same shit, but we don’t need to cater to that,” Mallahan said. “We don’t need to be another space for everyone else. We wanted to create a space women will feel comfortable at and create that kind of environment with the ‘girls to the front’ sign,” referencing the popular slogan from the ‘90s riot grrrl movement, which has been credited with birthing the DIY feminist punk scene.

Fath said she founded The Dollhouse because it was difficult being a woman and new to the DIY scene, so she created a venue that would give women a chance to perform.

“The DIY scene—and basically the world—is just very dominated by white boys and it kind of sucks,” Fath said. “The reason there aren’t as many girls in bands is because we’re not taught we can be. Every guy that I know in a band has been in bands since like junior high, and I was just going to see my boyfriend’s band. I was never in a band until college and I realized guitar was really easy and I could do it.”

Fath said The Dollhouse does not aim to exclude men but rather to give women more opportunities in art.

“People think that making things an all-female show somehow excludes people, but feminism isn’t about that,” Alexus said. “When there are movements going on, there are all kinds of underlying claims of exclusion, and that’s not the case. Like in the Civil Rights Movement and with Black Lives Matter right now, it’s not about excluding people. It’s just trying to create a space where everyone feels protected, loved and free.”

In 2015, The Dollhouse—which doubles as a residence and a performance and installation space—relocated from its space in Irving Park to its new location, dubbed The Dollhouse 2.0, to accommodate its increasing popularity.

The former Dollhouse could only host acoustic shows and was located above another apartment. Its owners wanted to move somewhere they could be louder and showcase more women-centric talent. The Dollhouse 2.0 is larger and a house rather than an apartment, lending itself to larger, louder performances.

“[The Dollhouse] grew really fast in popularity,” Fath said. “Our first show, I was begging people to come, but then our [feminist] space took off because I think there was a need for it.”

“People are starting to go look for what they want to see, they’re not going to wait for you to give it to them,” Alexus said. “I think having an all-female lineup be so successful says that people really want to see this. They want to seek women, and they care about us.”

The Dollhouse also participates in activist work to benefit women in the Chicago area. In November 2015, The Dollhouse hosted a tampon drive. Rather than paying cover to enter its shows, attendees had the option to bring tampons and pads to be donated to a local women’s homeless shelter. Fath said she also found coupons to buy Plan B for $10, which she plans to print out and distribute at future shows. The ladies of the venue once raised about $500 for Black and Pink, a feminist group that seeks prison reform for LGBT prisoners.

“Activism and DIY go hand in hand because the DIY community is full of people who really care and are creating spaces for ourselves and each other, so of course we want to do bigger things,” Mallahan said.

The FASN has created a rating system that designates three levels of safe spaces for DIY venues to prevent harmful behavior, defined as “harassment, violence and violation of consent,” and oppressive behavior, defined as “any action that perpetrates racism, misogyny, heterosexism, transphobia and any other systemic oppressions through antagonism, silencing, intimidation or coercion.”

The Dollhouse, for example, lies in the middle of the spectrum as an “Olive Level” space. Oppressive or harmful behavior is not welcome.

“FASN is cool because there is a set of guidelines I can always go back to,” said Fath, who went through FASN’s support liaison training in November. “It’s nice to be outspoken about what we are and what we stand for, as there are a lot of people in the community that don’t care. I don’t think we’ve had any instances here where a support liaison actually did something, but it’s nice to have them here because it’s an assurance that if something did go wrong, they are here to help.”

Plus Sign, a 24-year-old active member of FASN, conducts the network’s monthly support liaison training sessions, which he said offer reading materials about conflict resolution, group discussions, role playing scenarios and effective communication techniques. He said the number of FASN’s active support liaisons has fluctuated between 12–36 within the last year.

FASN uses methods of transformative justice in conflict resolution, which is the practice of responding to violence by supporting the survivor, the perpetrator and the community.

Alexus said the widespread support that can be seen at feminist DIY shows is her favorite part about the community.

“I definitely can feel the difference when the audience is looking at me waiting for their favorite [male] rapper and I have to win them over. It’s like I always have to prove myself,” Alexus said. “Having [feminist DIY] spaces is so refreshing because instead of having to win everyone over, they’ve already accepted me as a woman before I’ve even opened my mouth.”