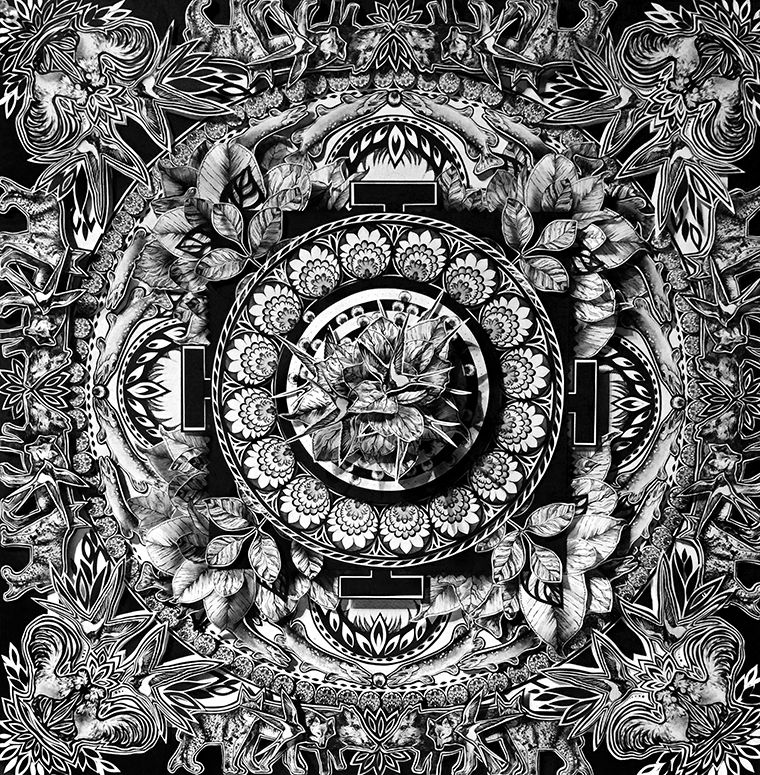 The Ukrainian Institute of Modern art

As part of the exhibit “Chornobyl: Impact & Beyond” at The Ukrainian Institute of Modern art, 2320 W. Chicago Ave.,  Karolina Kowalczyk created a work of ink and charcoal on layered paper called “Untitled.”

The catastrophic meltdown at Ukraine’s Chernobyl nuclear power plant in 1986—one of history’s worst—is now the inspiration for a two-part art exhibit at The Ukrainian Institute of Modern Art, located at 2320 W. Chicago Ave.

Titled “Chornobyl 30 Years Later”  using the Ukrainian spelling of Chernobyl, the exhibit began on April 1 and will run until May 29.

“Everyone has a story to tell, even if they were not there,” said Stanislav Grezdo, UIMA curator, noting that the planning and execution of the exhibit took over a year.

In the West gallery, “Chornobyl: Impact & Beyond” houses work from nine artists whose personal experiences shaped their pieces, while the East Gallery’s “Chornobyl: Artists Respond” contains commissioned prints by 30 artists to commemorate the event.

According to Robin Dluzen, exhibition and operations manager at UIMA, the response to the exhibits has been positive so far.

“People want to tell us about their stories with Chernobyl right away,” Dluzen said. “It’s one of those moments in life that everyone remembers where they were.”

N. Eden Ünlüata, an interdisciplinary artist, designer and educator, was living in Turkey with his parents at the time of Chernobyl. His performance piece, “Serving With Love,” demonstrates the important routine of drinking tea during social interactions in Turkey. This was a ritual contaminated by the radioactive particles, according to Ünlüata, an adjunct professor in the Interactive Arts & Media Department.

The radioactive chemicals released from the nuclear meltdown allegedly contaminated the Turkish tea fields, causing a widespread panic among locals. In an effort to calm the public, the then-minister of industry and trade in Turkey, Cahit Aral, drank black tea in front of journalists to prove the tea was harmless. He jokes that families were more susceptible to radiation through their televisions than from drinking tea, according to Ünlüata.

“I wanted to reenact the ritual of people coming together and being served tea,” Ünlüata said. “You sit, you drink and, allegedly, you’re also getting radiation [from the TVs].”

Ünlüata said he wants people to discuss the “failures” of the Turkish government.

Karolina Kowalczyk, whose mother was pregnant at the time of Chernobyl, used the inspiration of vytynanky, a Ukrainian paper cutting technique, to form her mandala-shaped ink and charcoal work, “Untitled.”

“I was particularly inspired by the [Chernobyl Nuclear Power Plant] Zone of Alienation,” Kowalczyk said. The Zone is the area surrounding Reactor No. 4 at the Chernobyl power plant. This area is at the highest risk of radioactive contamination and is still closed to the public.

According to Kowalczyk, the lack of human intervention has allowed the area to return to its natural state, where wildlife and animals have returned sporadically.

“I created [‘Untitled’] in the shape of a mandala because it represents a universe in itself,” Kowalczyk said. “To me, when you’re in your own world or universe, you’re isolated, and that’s what [the Zone] felt like.”

Yhelena Hall also examined Chernobyl’s effects on nature in her piece, “And The Names I Forgot.” Hall writes in her accompanying artist statement that she used plants that did not normally exist in the same environment to represent them coinciding in memory.

“It captures the particles of the past and the history,” Hall said. “This is post-tragedy, when you’ve got a huge, abandoned territory and nature took over it.”

The fine art prints in the East Gallery exhibit have been copied and bound into a portfolio, along with statements provided by the artists. The bound portfolio will be available for purchase through the UIMA website at UIMA-Chicago.org, according to Grezdo.