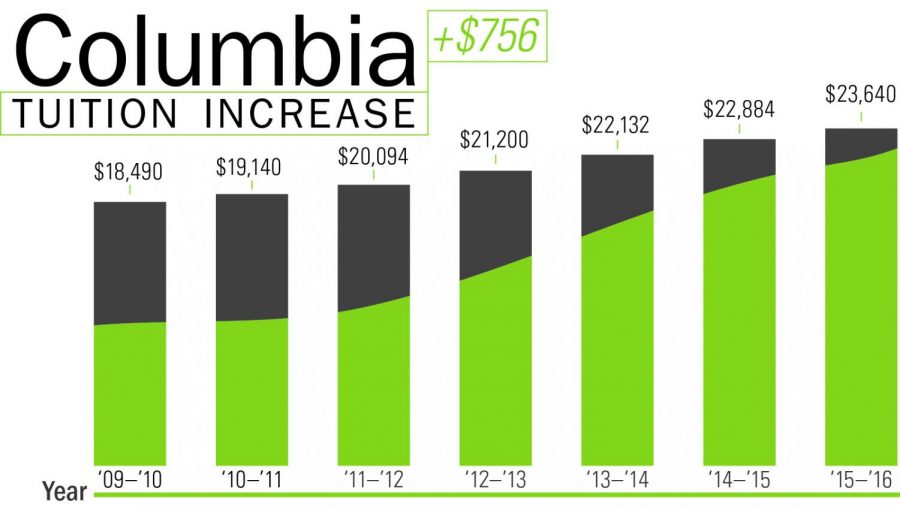 Enrollment keeps falling, but tuition keeps increasing—full-time Columbia students will be expected to pay $756 more for tuition costs during the 2015–2016 academic year.

During a Dec. 9 meeting, the college’s Board of Trustees voted in favor of a 3.3 percent tuition increase, raising total full-time tuition prices from $22,884 to $23,640,  President Kwang-Wu Kim announced in a Feb. 3 collegewide email. This is the second consecutive year that tuition increased at this rate, making it the second-lowest tuition increase in the last decade.

Despite the tuition cost, most student fees will hold steady with the exception of student health and U-pass fees, which will increase by $20 and $2 respectively.

Next year’s tuition increase is a result of increasing yearly costs as well as a decline in enrollment, said Stan Wearden, senior vice president and provost.

The administration understands the financial strain college can cause and is doing everything it can to make tuition as affordable as possible, Wearden said, which includes dipping deeper into the college’s operating budget to provide more scholarship money.

“The college has had to pull back on a number of other issues as we made it a priority to address student affordability,” said Mark Kelly, Vice President of Student Success.

Since fiscal year 2011, the college has increased its total unrestricted institutional aid from $16.9 million to $38 million, which is “well over a 100 percent increase,” Kelly said. Additionally, 72.6 percent of Columbia freshmen currently receive scholarship money from the school, a 28.7 percent increase from 2010. The total percentage of undergraduates receiving scholarships has increased from 24.4 percent in 2010 to 48.3 percent this year. Kelly presented this information to the college’s Student Government Association during its Feb. 3 meeting.

According to Kim, a number of factors determine tuition rates, including enrollment numbers, financial aid commitments to continuing students, the college’s dependence on tuition and trying to keep tuition lower than the national average.

“It’s a careful, thoughtful decision, and at all points everyone involved is talking about affordability and [the] impact on students and trying to do the best we can,” Kim said.

Even with this process, some students think the college is not providing them with the money they need to stay in school.

However, in addition to drawing from the operating budget, the college also needs to attract more donations in order to increase scholarship funding, Kim said.

“This is a college that doesn’t have a robust history of fundraising,” Kim said.

He compared Columbia to “fundraising machines” Northwestern University and University of Chicago, which have strong networks of alumni donors.

Because of this, Kim said the college will have to be more creative when it comes to increasing funding, and part of this plan includes rebuilding relationships with alumni to encourage donations. Kim added that the college will also work to appeal to people who believe in its mission and moral standings.

Another way to maintain college affordability is to combat declining enrollment, according to Wearden. In the future, the college will look to other forms of enrollment, including transfer, international and graduate students.

Wearden also said increasing the average class size by one student could save about $1 million in instructional costs.

Tuition increases at the college remain less than the national average for private colleges, according to Wearden, in accordance with a resolution that Columbia’s SGA introduced last year.

The SGA also approved the increase in student health fees for next year. The organization has the opportunity to vote on student health and student activities fees every three years, but SGA was able to vote on the health fees early because they felt there was a need for increased mental health services at the college that had to be addressed, said sophomore art and materials conservation major and SGA president Sara Kalinoski.

According to Kim, the money will be used specifically to increase resources at the counseling and student service office to provide more expertise for student health issues. Some money will also be allocated to the disability office, he said.

“We thought that it was beneficial for our students to have enough counseling services and have enough therapists and counselors [available on campus,] just like every other school,” Kalinoski said. “I think mental health is such a huge thing that all of our students need, which is why we decided to vote on it.”

Although it voted to increase the college’s health center fees, Kalinoski said the SGA is dedicated to minimizing tuition costs to maintain college affordability.

“We are very involved in advocating for affordability,” Kalinoski said.

According to Wearden, the college’s administration will continue trying to balance keeping tuition as affordable as possible while maintaining the resources necessary to offer the highest possible quality of education to students.

“Ultimately, affordability has at least, I think, two factors,” Kim said. “One is cost, and the other is value. We’re all willing to stretch for something that we truly believe is valuable.”