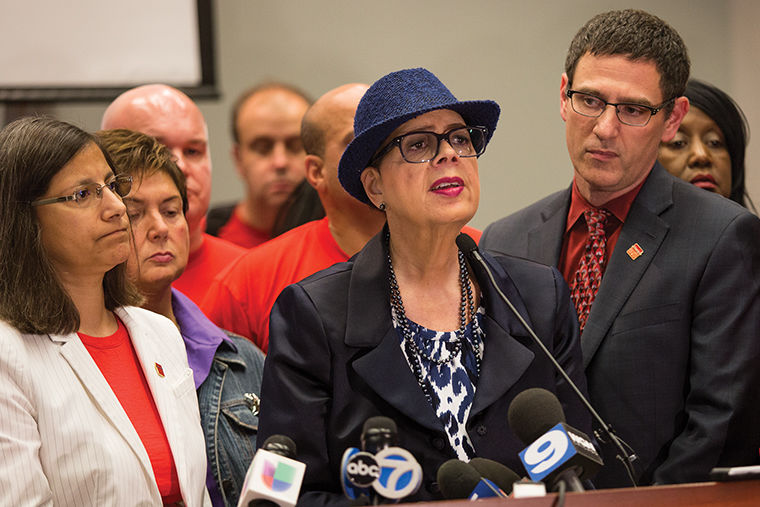 The Chicago Teachers Union set its Oct. 11 strike date after unsatisfactory contract negotiations with the Board of Education at its Sept. 28 House of Delegates Meeting.

The Chicago Teachers Union, after months of contract disputes, voted almost unanimously to go on strike Oct. 11 at a House of Delegates meeting Sept. 28.

The strike won authorization with a vote of 95.6 percent, according to a Sept. 27 press release from CTU, which has been negotiating its contract with the Board of Education since June 2015.

According to the press release, the scheduled strike will be the third walk-out of Chicago public school teachers since Mayor Rahm Emanuel took office in 2011; one took place in April 2016 and the other in 2012.

“I’m delighted to stand in solidarity with my sisters and brothers of the Chicago Teachers Union,” said Chris Baehrend, president of the Chicago Alliance of Chicago Teachers and Staff Local 4343, after the House of Delegates meeting at the International Operating Engineers Hall, 2260 S. Grove St. “If we want kids to have excellent schools, then the mayor needs to fund them. The governor and mayor have shown they’re not willing to do that without some sort of pressure.”

Victoria Rosario, a music teacher at Philip Rogers Elementary School in West Rogers Park, said she hopes reasonable contract negotiations can be made before a strike takes place.

“As a teacher, I don’t want to strike,” Rosario said. “But, I feel like we’ve been pushed to our limits in terms of the cuts we’ve faced in our schools; I’ve gone from having class sizes of 25 students to 35 students in a very short time, and it’s made a humongous impact.”

“A strike is a very serious step that affects the lives of thousands of parents and children, and we hope that in the coming days, the CTU’s leadership works in good faith of the bargaining table to reach a fair deal,” said the emailed statement.

Shari Nichols-Sweat, who has been teaching at Chicago Vocational Career Academy High School in the South Commons neighborhood for 29 years, expressed disappointment with the lack of respect she believes the city is giving to teachers.

“The government officials are who they are [because of] a teacher, so why are [they] treating me like I’m nobody? I helped you become who you are,” Nichols-Sweat said.

In a speech to the press after the Sept. 28 meeting, CTU President Karen Lewis urged citizens to take proper actions to stop the strike from happening.

“Come Oct. 11, hopefully [the students] are in school because that’s where we’d rather be,” Lewis said. “Call the mayor’s office, call your alderman’s office, talk to the people that can actually make a difference.”

Many teachers at the meeting indicated they  are hoping that authorizing a strike will spur negotiations before the date comes.

“Hopefully, the city will see that the teachers here are willing to sacrifice themselves,” Baehrend said.