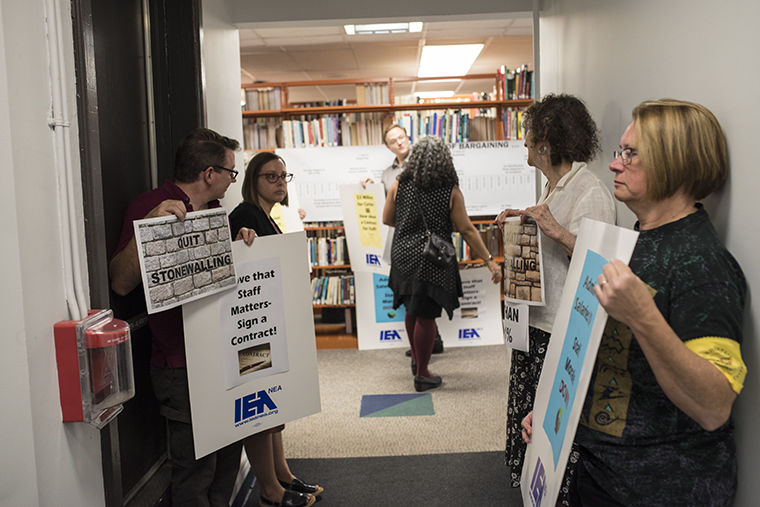 Members of the United Staff of Columbia College picketed outside an Oct. 18 bargaining meeting, held at the 624 S. Michigan Ave. Building, to raise awareness about their lack of a contract.

Holding signs that read “We are more than one percent!” and “Quit stonewalling,” members of the United Staff of Columbia College picketed the Library’s fifth floor as members of the bargaining team entered a contract negotiation meeting on Oct. 18.

US of CC’s negotiations team wanted to force Columbia’s negotiators to take a “walk of shame” as they lined the bargaining meeting’s entrance in the 624 S. Michigan Ave. Building, said Cat Bromels, print service manager in the Design Department and member of US of CC’s bargaining and contract support team.

Bromels added that the “walk of shame” was intended to be an informational picket to make a statement on behalf of US of CC.

“[It’s] to inform our members how long we’ve been bargaining, to show the college that our membership is in support of the union’s bargaining team, [and] that we’re tired of waiting to get the contract signed,” Bromels said.

US of CC and the college have been negotiating a contract agreement for approximately three years, as reported Sept. 12 by The Chronicle.

“The college can clearly move very quickly with decisions when they want; they canceled a BFA program over the summer,” Bromels said.

As reported Sept. 12 by The Chronicle, US of CC President and engineer in the Radio Department Nick Hoeppner said the union was “cautiously optimistic” that the negotiation would keep moving forward. This has since changed, he said on the day of the picket.

Hoeppner told The Chronicle Oct. 18 that the union has not made much progress with its latest contract offer, adding that when the contract went to review, many issues he thought were put to rest were reopened.

“The struggle has come down to just a few economic issues in the contract,” Hoeppner said.  “When I say economic issues, that’s salaries [and] benefits.”

Bromels said Columbia’s staff is also concerned about being replaced by student workers.

“We in no way don’t want student workers to have jobs, but students are going to learn better if they’re working with a staff member versus just doing work professional staffers do,” Bromels said.

Another important issue is a cost-of-living increase for staff. According to Bromels, staff members have not received a cost-of-living adjustment in more than three years. The cost of living rose by 14 percent since 2009, but staff received its last increase—5.5 percent—that year.

Union members want fair pay as their wages are fairly low against market value, which they accept because they love working at the college, Bromels added.

Sheila Brady, fellow member of US of CC and coordinator for the Education Department, said staff members need to be applauded for their work at the college.

“It’s time for staff to be recognized as the critical element it is in the lives of students,” Brady said. “We need to see that [recognition] in respect given to us by administration, but also in our salary checks.”

According to Brady, with new personnel added to Human Resources, negotiations were expected to accelerate; however, this has not been the case.

Mary Badger, US of CC negotiations chair and director of theater facilities for the Theatre Department, said H.R. has delayed the contract negotiation.

“We’ve had a new director of Human Resources, [Norma de Jesus], added to the mix,” Badger said. “Getting her up to speed and having her own opinion on things has delayed things.”

According to an Oct. 20 statement from the College News Office on behalf of de Jesus, she requested more information and clarification from US of CC after reviewing the contract proposal but those discussions were resolved quickly and the parties have been meeting regularly since then.

“The meetings have been positive and productive, and everyone involved is looking forward to finalizing the renewal contract very soon,” the statement said.

Badger, who was a part of the Oct. 18 bargaining meeting, said she was happy with the progress made at the meeting and is hopeful of forward progress.

“We’re down to the last bit of nitty-gritty things, and that’s always the hardest thing to get done in any kind of negotiation,” Badger said.

According the Badger, the “nitty-gritty” of the negotiation is compensation.

As for the union’s bargaining and contract support team, Bromels said at the rally that the union plans to “poster the campus” to get its voice heard.

“We want to raise awareness across campus and show the school that the longer it takes [to get a contract], the more active we’re going to be,” Bromels said.

Brady added that the union has done its part and hopes administration will now do the same.

“The reason we organized the union was to have a voice and to have a place at the table so staff is not just manipulated.

We have done that,” Brady said. “But, I think it’s time that administration cooperate.”