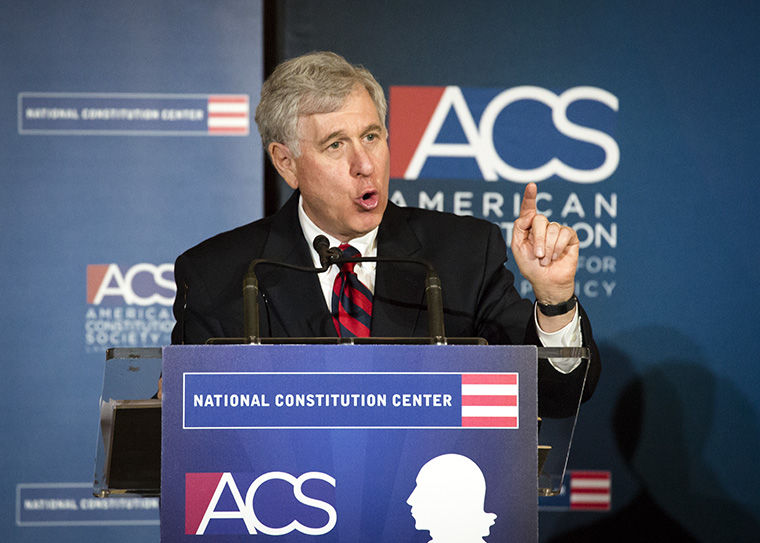 Professor Carl T. Bogus of Roger Williams University School of Law in Bristol, Rhode Island, argued against the Supreme Court's ruling of the second amendment, which gives Americans the right to protect themselves by owning a handgun.

The National Constitution Center held a debate Nov. 19 at the Chicago Cultural Center, 78 E. Washington St., on whether the Supreme Court was correct in its ruling in the 2008 case of District of Columbia v. Heller that the Second Amendment gave individuals the right to own guns for lawful purposes.

Professor Carl T. Bogus of Roger Williams University of Law in Rhode Islandand Professor Michael O’Shea of Oklahoma City University School of Law debated the issue. Bogus, who argued against the Heller decision, emphasized that when the Second Amendment was adopted, it was envisioned only for use in the militia. O’Shea argued in favor of the Court’s decision, which supports the current reading of the Amendment.

“The bringing together of these scholars with different philosophical perspectives for a civil debate that is not about policy matters, but constitutional matters,” said Jeffrey Rosen, president and CEO of the National Constitution Center, who also served as the moderator at the debate.

O’Shea emphasized guns are necessary for self-defense, hunting and other things of that nature. He also stated the Second Amendment right was somewhat based off of the British Parliament in the 18th century, which Bogus later argued is irrelevant today.

The state equivalents of the Amendment that explicitly referenced the militia by including the term “for the common defense” still supported individual gun rights, O’Shea said.

“Some of the right-to arms provision, and some of the states of the founding era did have the language about the common defense, and the remarkable thing is even those throughout the 19th century were interpreted to protect individual ownership,” O’Shea said. “It’s for the common defense but it’s a right of the people to keep and bear arms.”

Bogus argued that the Amendment can be restricted because it is not clear what the framers and ratifiers meant and to whom the Amendment applied–the people of America for individual use or for armed U.S. militia.

“There’s no coherent answer to this,” he said. “They [Constitution authors] don’t want you taking handguns into your place of work.”

In the closing statements, O’Shea emphasized that times may have changed since The Constitution was written, but “there is still support in the American tradition.”

“You don’t have to be a 20th or 21st century living traditionalist [to experience] the great sweep of American tradition through the state,” O’Shea said.

“What the Supreme Court has done has started to act like a legislature, and there is no way out,” Bogus said. “Judges will forever be balancing how much does this regulation burden this right.”

Before the debate, 63 people werefor limiting the Second Amendment and 56 people were against it. After the debate, there was a 44 percent increase for the side that was for the resolution, making Bogus the debate’s winner.

Ryan Dick, an architect who attended the debate, came in with an open mind but wished there was more relevance in today’s time with the issue.

“I was really appreciative to hear both sides,” Dick said. “I wish it had also gone into some application to today as well, though I guess that’s a little bit different than what the National Constitution Center stands for. But that’s something that could’ve changed my mind more, perhaps.”