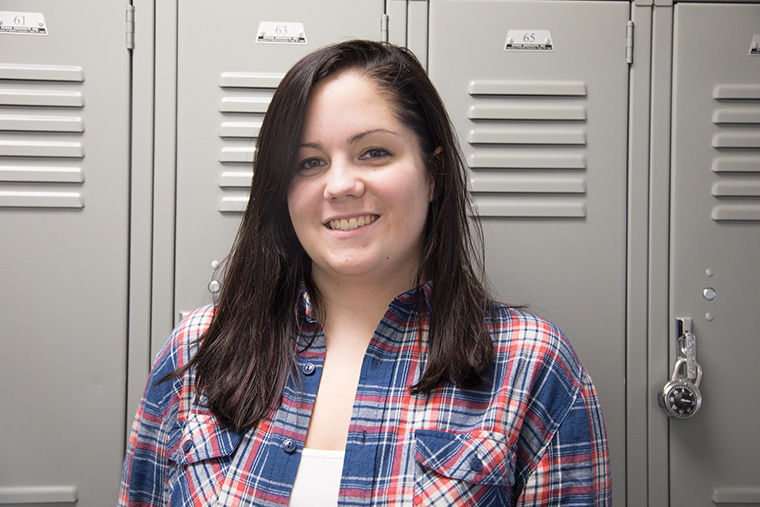 Durbin stepped up as a co-captain at an interest meeting after playing softball for more than 10 years. Durbin’s family of St. Louis Cardinals fans piqued her softball interest during elementary school, and she played on her high school’s varsity squad for four years.

Durbin chose to study graphic design after taking a web design and desktop publishing class in high school. She said she would like to work in advertising or on movie sets after she graduates.

The Chronicle spoke with Durbin about her passion for softball, her decision to become a co-captain and her aspirations for the team’s upcoming season.

THE CHRONICLE: What made you want to step up and become one of the team’s captains?

ALLY DURBIN: I really wanted it to happen. I love softball and I haven’t played since high school, so I think I wanted to step up because I know what’s going on.

What are your goals for the team and this upcoming season?

AD: For this first season especially, just to get everyone together. Ideally, we would get a league and get going, but even if for some reason we couldn’t, [we just want] to get girls together to play [softball]. If you love the sport and you haven’t had the opportunity to play since you graduated high school—being at a school like Columbia where it’s all about arts and creativity—it’s my goal to be able to make it happen so that people have that outlet to go and do something fun and athletic if that’s what they enjoy.

What makes you so passionate about playing softball?

AD: [Softball] is something that I’ve always loved. It’s hard to find words to describe how it feels to make a play. The feeling when your bat contacts the ball—it’s an adrenaline rush to feel that and be out on the field.

What is your favorite memory from playing softball?

AD: It was my junior year and I was playing second base. One time, in the middle of the game, someone hit a ball really hard and my friend caught it before it hit the ground at third base. There were runners on first and second and I don’t think they realized that she caught the ball. [The third baseman] threw it to me and we got a triple play. It was a really great moment because we all had to work together. It was a really big team moment.

What challenges does the team face right now?

AD: One of our biggest goals right now is just to get together and have everyone introduce themselves and get to know each other. That way, we can start working toward becoming a team. Technically we are a team, but it’s hard to feel like a team until you’ve actually met your teammates, so I think that’s one of our biggest things so far.

Are you involved in any other activities or organizations on campus?

AD: I’m part of The F Word, the feminist group on campus. I just joined at the end of last semester so I haven’t done much yet. We haven’t met yet this semester, but hopefully I will get going in being a more active member in the future. There’s some good things that they’re wanting to get going this semester.

You’re from Indiana—how did you become a St. Louis Cardinals fan?

AD: My family always went to baseball games, and it was in my blood to like and watch baseball. My dad’s family is from [St. Louis] so they were huge fans. I’ve been to four or five games in the old Busch Stadium and I’ve been to three or four at the new Busch Stadium. I was actually at the game where Mark McGwire tied the home run record. We have the newspaper clipping from that game and then we have our tickets framed in my house. It’s really neat.