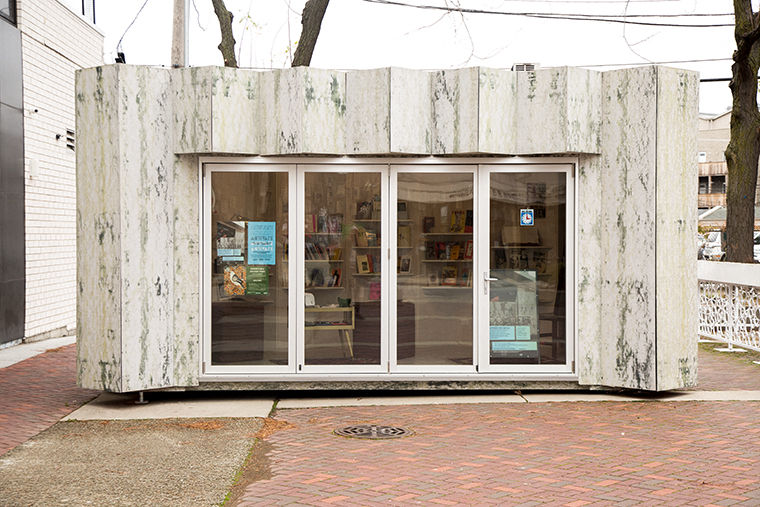 This Boombox, a repurposed shipping container, is just one example of how Latent Design hopes to utilize and revitalize public spaces.

The purpose of Read/Write, which will celebrate its 10th anniversary in 2016, has been to collect amateur and professional media chronicling the evolution of Chicago without making judgments about content or timeliness, according to Read/Write Library founder and executive director Nell Taylor.

“There’s incredible stuff out there that is essential to a community’s history and people’s lives that is amazing on its own terms,” Taylor said. “The goal is to help people understand the stories of their neighbors better, through having access to and preserving these publications.”

Taylor added that most of what Read/Write houses at its main location, 914 N. California Ave., has been collected through grassroots efforts to curate and document Chicago’s history, with minimal searching being done by Read/Write’s volunteers.

The pop-up began Nov. 7 and is scheduled to run through Nov. 29. The library houses media including collections from nearby 826CHI, a nonprofit writing tutoring program, and handwritten poems from Oba Maja, a prominent Wicker Park figure who sold his poems for $1 in Wicker Park until his death on Oct. 16.

Read/Write pairs with art organizations to ensure that what they present in their programs reflects the true identity of the areas because the diversity of Chicago is so rich, Taylor added.

“Doing these pop-ups in different communities [allows for flexibility],” she said. “Whether we are doing it in Wicker Park or other neighborhoods, each is different.”

The library is housed in a small kiosk called the Boombox, a repurposed shipping container designed by Latent Design, as part of the Activate! Chicago initiative, which is centered on using public space as a “catalyst for community connectivity, local entrepreneurship and civic innovation,” according to Activate! Chicago’s website.

Katherine Darnstadt, principal architect and founder of Latent Design, said the idea for the Boombox came from observing how other cities used pop-up retail to help small businesses change the retail world.

“There is a huge gap within how small businesses have access to capital…. It’s showcasing the diversity of businesses that could use [spaces like this],” Darnstadt said, adding that Latent Design  hopes the Boombox will house museums as well.

She added that she hopes to create a larger conversation about how underutilized public spaces are compared to park spaces through developing built environments such as the one currently housing the library, as well as the Boombox structure itself.

“We have to bring awareness,” Darnstadt said. “We had to revamp and write new ordinances for something to exist like this, [something] that changes the built environment and makes it accessible for people.”

The Boombox structure is available to rent for the next three years, and is flexible for student use, including galleries or showcasing student work in other capacities, Darnstadt said.

The pop up has special programming on weekends including workshops dealing with curating family and community history.