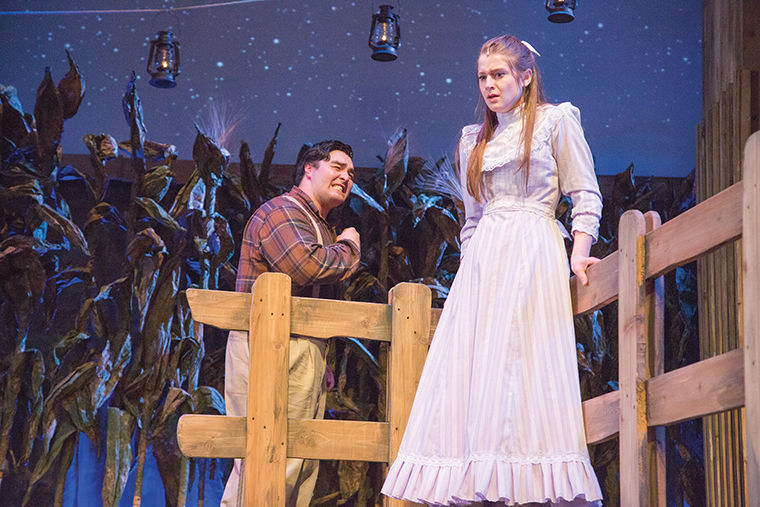 Ashton Byrum, director of the production and an assistant professor in the Theatre Department, said the department chose “Oklahoma!” for its young cast, authentic design, the roles it offered and its status as an American classic.

“This year we wanted to get into something that involved a lot of dance and was a ‘golden age’ musical,” Byrum said.

Elya Bottiger, a junior theatre major who plays boy-crazy farm girl Ado Annie, said she loved the musical since she watched the movie as a child.

“It’s a honor to be a part of the program that is filled with so many wonderful students,” Bottiger said.

Bottiger describes her character as a young girl becoming a woman, who desires to understand her newfound anxiety around young men. the play follows two romances between cowboys and farmgirls.

Even though the musical “feels like a party,” Bottiger said there are many dark and frightening realities depicted in the play. At the same time, she said,  her character brings  humor to the stage.

“The challenge is playing the role and also playing the hilariously written lines complete with truth and vulnerability,” Bottiger said.

Benjamin Nichols, a senior theatre major, plays Will Parker, a lovesick young man who makes foolish decisions with his heart and not his head.

“It’s about growing up and finding yourself,” Nichols said. “The characters are looking for romance and a way to settle down.”

A big directing challenge for Byrum was the many dance numbers that the cast needed to master, along with keeping everyone engaged at all the different skill levels, he said.

“There are so many pieces to a musical—you have a choreographer, a director, a set designer, a music director, a lighting designer and a costume designer,” Byrum said. “It’s about making sure it’s coming together at the right time.”

From the set to the sound quality, Bottiger said she finds this production grander than previous shows she has done.

“Rather than a showcase showing off talented actors, this shows off the entire body of the Department coming together to make one massive, beautiful work,” Bottiger said.

After spending eight weeks rehearsing together, Bottiger and Nichols both said it was difficult not to bond together.

“We are totally a family,” Bottiger said. “We are all people who love musical theatre and love the art and love the process.”

Just before taking stage, Bottiger said the atmosphere is filled with excitement, anticipation and energy.

“Basically what happens is there is a total boost in energy,” Bottiger said. “It’s like everyone just got a shot of adrenaline.”

Byrum said the performance’s importance goes beyond the humorous dialogue and set designs.

“This is a good moment to look at a very simple love story and think about what it means to be a good person,” Byrum said.