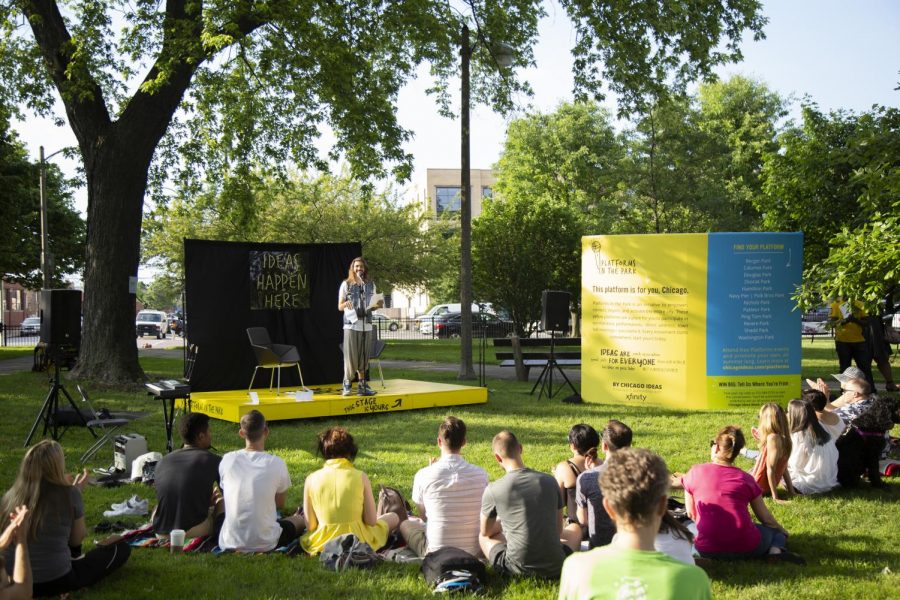 Chicago Ideas launched a new program, titled “Platforms in the Park,” that will run from June to August. Across the city, 12 different parks will have yellow platforms where Chicagoans can hold events.

Platforms placed in parks throughout the city are drawing Chicagoans to gather, perform, discuss and create ideas including a celebration of the 50 year anniversary of Pride.

Twelve parks on the North, West and South sides will be part of the Platforms in the Park free program put on by the Chicago Park District, Chicago Ideas and Xfinity. This program runs through August, and comes in advance of Chicago Ideas Week, Oct. 12–17, a festival with over “200 global thought leaders and innovators speaking on a variety of topics.”

Vanessa Buenger, director of marketing and content for Chicago Ideas, said when planning the kick-off for the platform initiative planners wanted it to center on the queer community since this year marks 50 years of Pride.

“Chicago has some really deep roots with the queer community, having one of the first gay rights groups in our country founded here nearly 100 years ago,” Buenger said. That group was Society for Human Rights, founded in 1924.

Twelve parks were selected that represent communities across the entire city, Buenger said.

“The main goal of this was to empower Chicago citizens to come out to the platforms and share their voice,” Buenger said. “Chicago Ideas is a platform for everyone. What [better] way to showcase that than by bringing together such an important community to the core fabric of this city.”

Buenger said Chicago Ideas is working with the community partner network to highlight the good work and innovations emerging from the neighborhoods where the platforms reside, as well as to showcase the diversity of thought and experience the city has to offer.

Kevin Beerman, content editor for Chicago Ideas and poet, was one of many people who was center stage on the platform in Revere Park, 2509 W. Irving Park Road, for the kick-off event “Pride in the Park: A Celebration of Chicago’s Queer History.” The event included speakers, discussions and art performances.

“This partnership … is giving us the chance to share the variegated perspectives we all have living in Chicago, living as queer people and the different experiences we have in that capacity,” Beerman said.

Buenger said they knew they were kicking off the initiative during Pride month and wanted to invite the queer community to the platform to take ownership and have a moment that was their own.

“I have had the unique pleasure of working on both sides of it … I have been working on bringing the Platforms in the Park initiative … to the parks in Chicago from the beginning,” Beerman said. “They were generous enough to give me a space to express my perspective as being a member of the queer community.”

Kevin Sparrow, literary manager for Nothing Without a Company, has previously done work in Douglas Park with the community, and heard about the initiative while attending one of Douglas Park’s monthly Cultural Council meetings earlier this year. While the community had done work in other mediums, Sparrow said they did not hear much about performance and wanted to do something to bring theatre art in the community forward.

As part of the initiative, on July 6, Sparrow hosted the first community organized event in Douglas Park, “Play and Play Again: Making Theater from Community Stories.” Sparrow said the event allowed community members to stand up and tell their personal stories to be considered for a potential play in the future. They said Douglas Park was the perfect location to hear a variety of voices and stories because it is in the middle of North and South Lawndale and near Little Village; they added it is important to hear the differences and similarities of the communities.

“There are a lot of organizations in these communities, [like in] Douglas Park … [there are] a lot of creative people, people with ideas, people with things they want to share and all they need is a platform to do that,” Beerman said.

Sparrow said it is important to them to get people involved and show the community the platforms are a spaces that exists to be used.

“Every invention, every movement, every business idea starts from one spark of an idea,” Buenger said. “If ideas are reserved for people of a certain income, education level or zip code, then we are cut off from what could be if everyone had a platform. All an idea really needs is a platform.”

Anyone can sign up to host their own event at one of the participating parks until August, and events can also be spontaneous as long as the platform is not being used.

“Platforms are for Chicagoans; they are for anyone that is walking by and [feels] compelled to share a story,” Buenger said.