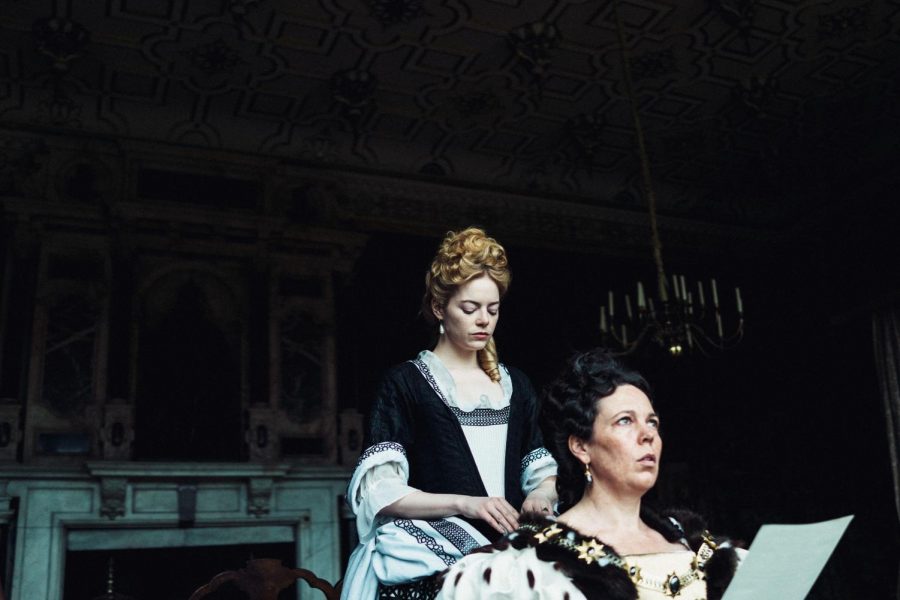 “The Favourite” is a quirky, historical drama set in 18th century England about Queen Anne’s rule while England is at war with the French. Directed by Yorgos Lanthimos, the film stars Emma Stone, Rachel Weisz and Olivia Colman and features witty humor, complex female characters and high production values.

The film’s comedy revolves around quick banter, obscenity and bluntness. The characters are not afraid to be crude, especially Lady Sarah, played by Weisz, who argues deftly and does not back down, even when one of the leaders of parliament, Harley—played by Nicholas Hoult—stands over her. In that scene, he is enraged because Sarah will not concede to his differing opinion on the war. Sex is also alluded to throughout the film, whether in one of Sarah’s brash responses or intimacy between characters. However, there are a few references to rape that are in poor taste, regardless of the satirical tone.

This film’s strongest quality is that each female character is shown as a complete human being with weaknesses, desires, flaws and grief. Stone’s character, Abigail, begins as a woman who has lost her status as a Lady and is seeking work as a servant. Despite her low station, she’s sincere and kind, quickly winning over Lady Sarah and Colonel Masham, played by Joe Alwyn. Queen Anne is first shown as “mad,” but her eccentricities are later explained through her personal struggles. Lady Sarah’s character may be the most consistent, beginning and ending as a strong-willed woman, though the audience gets to see unexpected and vulnerable facets of her between the opening and closing credits. Each woman has a complicated relationship with the other, especially as Abigail becomes the Queen’s companion—a role Lady Sarah had previously filled.

Most scenes take advantage of beautiful, natural light, a few even showing Stone glowing under sunlight as she sits in front of a wall of tapestries and paintings in the Queen’s castle. The musical score was intense, effectively foreshadowing the rise of conflicts, quickly rising in volume and leaving just as abruptly as the shot changed. In some instances, the dialogue of the next scene began while the camera lingered over the previous scene, stringing together separate encounters between characters.

The true war in this film only becomes clear as the film and its characters unravel. The humor and the spectrum of love and loss spanned throughout the film make it well worth watching.