‘Tootsie’ musical to debut in Chicago 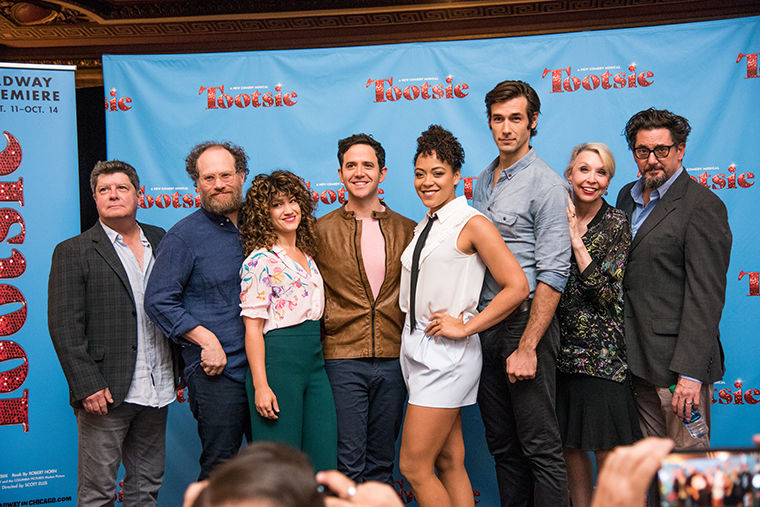 “Tootsie,” a new comedy musical based on the 1982 film of the same name, premieres in Chicago Sept. 11 and plays for five weeks at the Cadillac Palace Theatre.

“Tootsie,” a new comedy musical based on the 1982 film of the same name, premieres in Chicago Sept. 11 and plays for five weeks at the Cadillac Palace Theatre.

“Tootsie” tells the story of Michael Dorsey, an actor who struggles to be cast in big roles until he pulls off a desperate and preposterous stunt, disguising himself as “Dorothy Michaels” for an acting job.

The Chronicle spoke to cast members about comedy, challenges that come with screen-to-stage adaptations and the limits they would test to get what they desire.

THE CHRONICLE: What is the craziest thing you have done to get what you wanted?

Fontana: I had an audition for a Western show, and I was determined to get cowboy boots, and I didn’t have any boots, so I went to a shoe store, and I lied and said I was a shopper for a costume designer. [I said], “Can I get this pair of boots to try them? They might not work for the production.” I went to the audition and wore the boots with tags tucked in them and [then] I went right back to the store and said, “Ah, they didn’t work,” and I returned them and got my money back.

THE CHRONICLE: Did you get the part?

Fontana: I did not.

THE CHRONICLE: What message do you hope audiences take away from “Tootsie?”

Cooper: Finding what you’re willing to sacrifice for your passion and your love is a huge learning curve, and it helps to find who you are.

THE CHRONICLE: How do you relate to your character?

Cooper: I find my character and I to be fairly similar. She’s an actress and she is incredibly passionate about what she does. She has her insecurities and I think from finding the faults in yourself she can find comedy through that. She has a unique sense of humor. She has a dark, unique sense of humor that is different from the rest of the characters in the show.

THE CHRONICLE: Where do you find the comedy in adversity?

Grotelueschen: That’s what makes it funny—the more desperate you are. These are things that happen in our lives. When you want something so bad, or if something is just out of your reach, that is exactly when you fall on your face. It’s not often funny for the person who is doing the falling, but for the people watching, they love it.

THE CHRONICLE: Do you feel pressure in playing a character originated by such a well-known actress?

Stiles: Of course there is pressure that comes along with that, but I have felt so secure in this book because this material we are getting to do is the funniest material I have ever gotten the chance to do. They’ve given us such freedom in creating our version of it. No one wants to see me do an imitation of Teri Garr—there is only one her, and there is only one me.

THE CHRONICLE: How does the musical score relate to the show?

Halston: What’s so brilliant about David Yazbek’s score is that it actually pushes us forward in time. You get a sense about how people are feeling, but what’s so great is that—in a brilliant but economical way—you also further the narrative. So we’re actually watching the story unfold through the music, as well as the book, and that’s his great gift.

THE CHRONICLE: What advice do you have for college students when there are obstacles in the way of what they want?

Rogers: Don’t get lost in what you think is the new thing. Stick to what you want to do, and that will save you. There’s TV out there, there’s film out there—study what you’re doing. That stuff will come if it’s meant to come, but you’ve got to stick to the thing that makes you happy, otherwise you’re going to get lost.