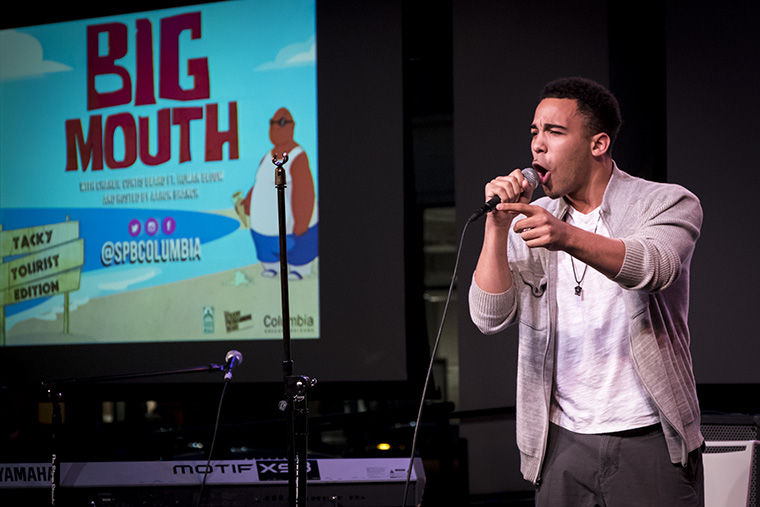 Students gathered in the Conaway Center of the 1104 S. Wabash Ave. Building laughing, singing and cheering on various acts to commence Big Mouth, the first in a series of open mic nights occurring throughout the year. Many of the performers were returning students, but the show featured freshmen as well.

“The audience was encouraging to the first-years and made them feel comfortable and welcome,” said Ian Valiente, a junior business & entrepreneurship major and president of the Student Programming Board, the student group that hosted the event.

Performers spanned genres from hip-hop to spoken word. Valiente said the SPB arranged to appeal to the various musical tastes of the crowd. He said the SPB is actively looking for more diverse acts for future competitions.

Aaron Branch, a sophomore theatre and business & entrepreneurship double major and the event’s emcee, said he enjoyed hosting the event and the atmosphere among the performers and the audience.

“I like the way people interacted with each other,” Branch said. “It was fun and games.”

Branch said he likes performing for students because they are his own age, and he can get away with a lot of jokes because he knows they will appreciate the humor.

Jayson Acevedo, a senior interdisciplinary radio and advertising major who performed a comedy act, said he has been performing since his freshman year and has also hosted Big Mouth in the past. He said the majority of his comedy routine was improvised.

“I told myself to just let loose, have fun and whatever happens, happens,” he said. “I want to help [the audience] momentarily forget all the unpleasantness that they may be going through in their lives. Ultimately, I think it’s just a message of self-confidence and an opportunity for people to realize that they can do anything.”

He said it was always nice to perform for incoming students because he never knows what their reactions will be.

Catherine Sakkos, a sophomore business & entrepreneurship major who attended the event, said she appreciated the atmosphere created by performers and audience members alike.

“It was a very open environment,” Sakkos said.

Acevedo said for the first performance of the semester, it was good to be back in a welcoming and open performance environment.

“Anything here is considered art,” Acevedo said. “Columbia crowds are open to anything, and they’re willing to go on a journey with you and hold on for the ride.”