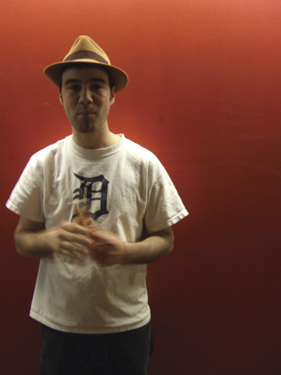 Ben Keeler’s music has been described by several critics as—as simple as his disposition—calm, cool, collected and always laid-back. With influences spanning the gamut of rock ‘n’ roll past and present and splashes of Motown here and there, Keeler’s new album The Cold, released in July, has made almost entirely himself.

His lyrics tell a story of a normal college student with songs about break-ups, loneliness and attempts to figure out what all of it really means. In song and on-stage, Keeler approaches the microphone timidly—leading the audience to doubt his ability to deliver. Yet after the first three bars of a song, all doubt is set aside by the monstrous voice that seems to jump from Keeler’s small frame.

The Chronicle recently sat down with Ben, a Michigan native, at Panera Bread Co. to discuss his musical influences and new album.

The Chronicle: When did you start playing music?

Ben Keeler: When I was 13, so basically like seventh grade.

How did you start playing music?

I was in a band for 10 years back home in Lansing, Mich., called the Van Ermans, and we made four records, toured and made a pretty good name for ourselves in Lansing and throughout Michigan.

Who are your influences?

Tom Waits, Sam Cooke, Motown and Roots—the Green Day/punk stuff I was into when I was in high school.

Did you make the album by yourself?

Mostly, I had some friends help on the drums.

What has been your favorite experience playing live?

My favorite show so far has been my senior recital at Columbia last spring. It was the final class I had before graduation and I had to write songs and arrange them for strings and horns—I was like the composer. I did everything and led all of the rehearsals and wrote all of the parts and hired all the musicians. It was cool. We had a huge ensemble of strings and horns.

How do you write your songs?

It varies. The idea for the melody comes first and the lyrics come later. It changes; different ideas come and I just record them on my computer and work them out.

Do you prefer playing with a band or playing solo?

I’ve been playing solo since I moved to Chicago, for the most part. It’s fun but I’ve been getting back into playing with a band again, and I love it. Right now I’m working on getting shows with a full band.

Are you working on anything new right now?

Yes—we have no date set yet, but I have some new stuff recorded.

How long do you plan on playing music?

For the rest of my life.

Do you have a back up plan in case your music doesn’t take off?

I just had an internship over the summer and I work at a post production audio studio. I’ve done a lot of the sound kind of stuff for movies and television and so that’s another thing. I’ve taught and always enjoyed teaching. I don’t want to be touring for the rest of my life. I feel I have enough experience arching the gamut of audio experience that it won’t be hard to find a good plan.