‘What We Do in the Shadows’ a bloody good watch 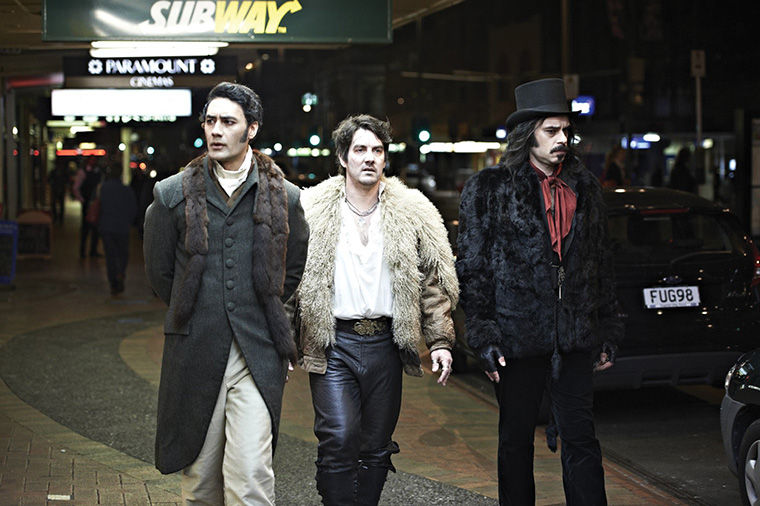 Taika Waititi, Jonathan Brugh and one half of the comedy duo “Flight of the Conchords” Jemaine Clement star as vampires learning to deal with the mundane modern world in the vampire film “What We Do in the Shadows,” which was released in the U.S. after a crowdfunding campaign.

The inevitable string of vampire comedies has a long list of failures: Nicolas Cage’s ill-conceived “Vampire’s Kiss,” Eddie Murphy’s hack job “Vampire in Brooklyn,” the “Scary Movie” creators’ “Vampires Suck” and, most recently, Tim Burton’s lukewarm “Dark Shadows.” Fortunately, a group of plucky New Zealanders get it right in the off-kilter mockumentary “What We Do in the Shadows.”

In the film, co-written and directed by one half of the comedy duo Flight of the Conchords Jemaine Clement and the actor Taika Waititi, the two come together to create a montage style well-suited to fit their comedy technique. The film adaptation from the cult TV series of the same name has been fleshed out and polished into a clever 86 minutes. A patchwork of sketches without much of a plot to them, “What We Do in the Shadows” plays like a top-shelf episode of “The Office,” giving an unexpected sentimentality to the bloodsuckers. With the freedom to rebound from failed jokes with cuts and tight editing, the uncomfortably witty pace marches forward without much narrative shackle.

The film takes place in a sketchy flat in Wellington, New Zealand, or “Vellington” as Taika’s character Viago pronounces it. Viago calls his roommates for a house meeting regarding the dishes that have not been done in half a century. Able to cope with the vampire life, the flatmates struggle with mundane tasks in a rapidly progressing world—paying rent, keeping up with the chore wheel and getting into nightclubs. The last of these problems is solved when their recent victim-turned-vampire, Nick (Cori Gonzalez-Macuer), joins the fraternity. Nick aids the group in a conquest for blood and ladies while learning the ways of a true vampire.

Nick challenges the group’s dynamic while trying to fit within their culture. “Bat fight!” they scream as the flatmates claw at each other’s throats in midair, fighting for the self-titled position of “group bad boy.” Nick’s premature initiation also draws attention from police and vampire hunters, causing the death of their downstairs neighbor. Demanding justice, the house shouts at him, “Shame, shame, shame,” kicking him out for an eternity as the vampire code demands. Nick walks away and asks, “So I’ll come back tomorrow?”

The improvisational tone is not an accident—most of the skits were done with a skeleton-like dialogue that relies heavily on the actors filling out the meat of the scenes. The actors are sincere in their uncomfortable conversations and genuinely tragic in moments of failure. After Viago’s botched murder, blood-spattered and defeated, he shrugs and says, “Well, at least she had a good time.”

Instead of evil murderous vampires living in a dark and stormy castle, the film presents a group of silly dorks living in a crappy flat. The premise is slapped down in the first 15 minutes and hilarity ensues. They get into trouble with the local werewolf gang who treat their werewolfism like a 12-step recovery program. “We are werewolves, not swearwolves,” affirms the alpha werewolf Anton, played by the hilarious Rhys Darby. Taika avoids his long-lost lover who, now 94, awaits their long-lost date. Vladislav fumes over the aftermatch of his relationship with his ex-girlfriend The Beast. The protagonists’ hijinks rack up more than an hour of footage edited together like a loose sketch show.

For a film that was only screened in the U.S. after being funded through crowdsourcing, it overcomes the disconnect between horror and comedy in vampire films. With a modern approach and amusing ensemble, “What We Do in the Shadows” is an entertaining way to spend an evening.