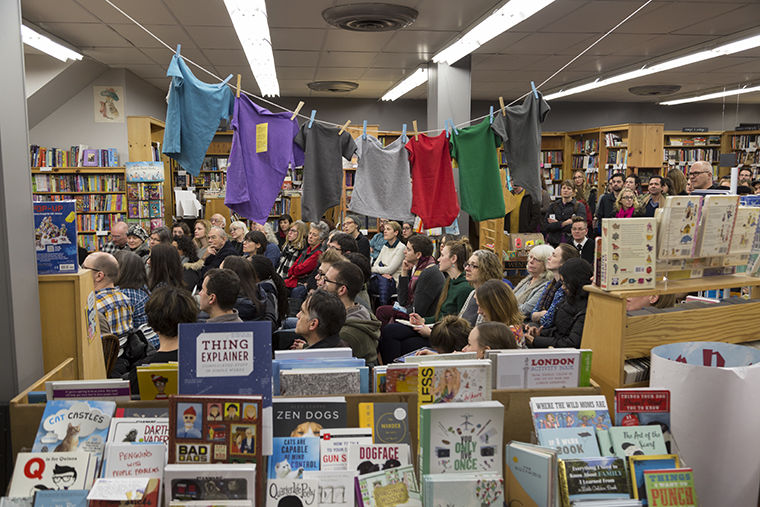 Women and Children First Bookstore is started a series called “The Conversation," pairing out-of-town authors with local writers, artists, and musicians. Participants discussed issues as diverse as art and activism, race and racism, sex, class, feminism, intimacy, darkness in literature and the life of the city. Their first event was Jan. 26.

Packed into the small corridors of an Andersonville bookstore, Chicagoans came together to inspire political change and build resistance in response to the inauguration of Donald Trump.

Women and Children First, 5233 N. Clark St., will be hosting a monthly series at which artists, writers and political activists from Chicago and around the world will hold panels on politics, according to series co-curator Rebecca Makkai. The first event of the series on Jan. 26, titled The Conversation, focused on art and resistance, served as a fundraiser for the Chicago Literacy Alliance and continued at a local restaurant.

“Trump won the election, and at that point, it was clear to us that this needed to be a series to take place at the intersection of culture and politics,” Makkai said.

The series will encourage discussion between panelists and the audience members, mirroring a conversation rather than a presentation or reading. Attendees are encouraged to stick around afterwards to continue their discussions and mingle with the speakers present.

“You can keep talking with each other,” Makkai said. “With the people you heard present and stay engaged so you’re being educated.”

For each panel, Makkai said the curators seek panelists of different ages, genders and ethnic backgrounds, as well as artists from all over the city.

“We have amazing voices here in Chicago, artists who are really politically active, not even in the most traditional ways,” Makkai said. “[They] have something to say about society, our culture and our world.”

Trinidad said some of the critical conversations about resistance are happening on social media sites like Facebook, so it is important to get people together in person and have those same conversations to truly understand where people are coming from.

“We’re all fighting for the same thing, but we all have different ways of doing it,” Trinidad said. “[We need to] recognize the various levels of opportunities there are as artists in the struggle and what we’re up against.”

Reeves said community discussions like The Conversation are key in the current political climate to decide how to march and organize.

“If we don’t stay in conversation with each other, we might miss something,” Reeves said. “We only do better as a collective.”