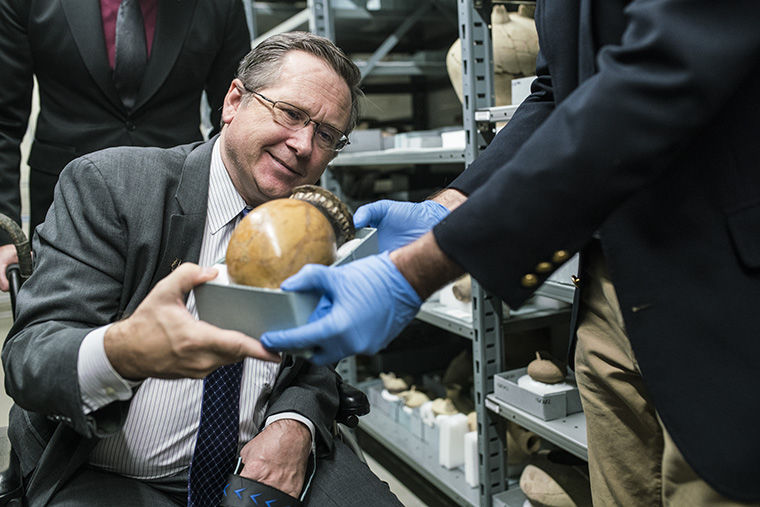 The Chicago Field Museum hosted a panel discussion Oct. 24 with Senator Mark Kirk to discuss and propose the Kirk bill, which is designed to stop funding for terrorist groups like ISIS.

Annually, ISIS makes $100 million from the illegal sale of cultural antiquities—monuments or relics from centuries ago—according to the senator’s website.

“[The black market] is a significant source of income for ISIS,” Kirk said. “ISIS has even set up a whole department of its own to handle the sale of antiquities.”

Kirk explained how the bill would require new measures to identify looted items.

In September, Kirk introduced the Terrorism Art and Antiquity Revenue Prevention Act S.3449 to stop antiquity trafficking in the U.S., according to Kirk’s website. The TAAR Act will create a database of key information to help U.S. officials and law enforcement to identify stolen artifacts.

“We now have the Assyrian Christian community of Iraq right here in Chicago, and we want to make sure that former Iraqis help us shut down ISIS supply of money,” Kirk said.

In August, the U.S. Government Accountability Office reported that the FBI has opened 18 cases related to ISIS artifacts in cities across the country, including Chicago.

During the press conference, Kirk and the panelists discussed  how the bill will create a permanent barrier to ISIS’ antiquity trade in the U.S. and assure that the federal government controls ISIS’ antiquity revenue stream.

“We are going to have a database inventory of cultural items, and we may share it with the public,” Creal said. “The more people in the room talking about the same issue, the better things will be. We have Justice, Treasury, Homeland Security, Commerce, and I know the military will be in there,”

In 2015, the federal Protect and Preserve International Cultural Property Act was passed, which lays the groundwork for the Kirk Bill and TAAR Act and gives the president permission to create an import ban on all Syrian artifacts, according to Kirk’s website.