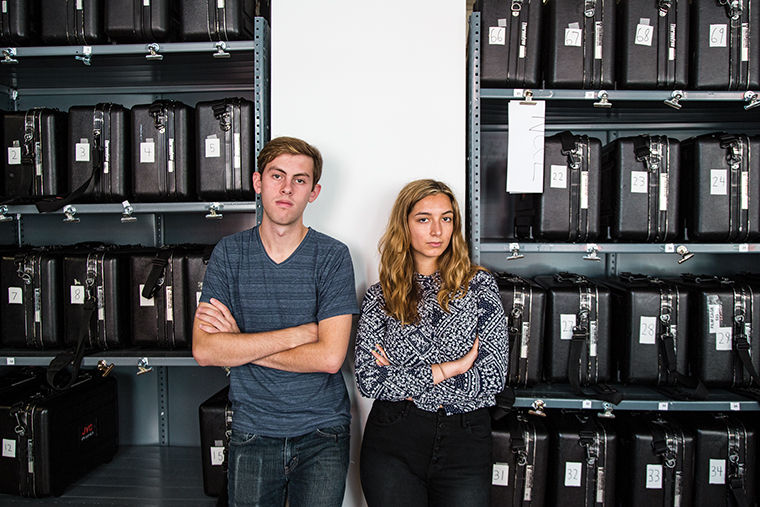 Hendon was offered the position on Aug. 6 and had already quit her waitstaff job when she got an email from her prospective supervisor, Daniel McCallum, coordinator of the Intermediate Equipment Facility.

“We were recently informed that our budget for student workers was being trimmed, and when we finally got the numbers in they were more severe than anticipated. As a result, the Film Cage is unable to hire any new student workers for the Fall 2015 Semester,” the email read.

Hendon is one of a number of students promised an on-campus job for the Fall 2015 Semester who either had that job unexpectedly eliminated or received severely reduced hours. The students said they were told the forthcoming 2015–2016 budget cuts cost them their work.

McCallum said approximately six students were offered jobs, and two had already gone through the payroll process by the time they were un-hired.

“I was horrified,” Hendon said. “I have my own apartment, [and] I don’t have much financial aid for living expenses. Aside from [needing] this job to literally live, I was really excited about being able to meet people in my department, hopefully get on set more and make connections that Columbia so frequently urges us to do.”

McCallum said some students expressed disappointment in the loss after he rescinded their job offers.

“They were fully expecting to have these jobs and then were told later that it wouldn’t be happening,” he said.

Jason Pauli, a sophomore cinema art + science major, said he had not yet begun the payroll process when his job offer at the Cage was also rescinded. However, Pauli said an email he received from McCallum on Aug. 10 suggested that the job was secure.

“Pretty much if I am emailing you, that means you already have the job,” the email read.

While Pauli said he was upset that he lost the job opportunity, he is not angry with McCallum because he thinks the cited budget cuts came from the upper levels of the department.

“I didn’t feel any aggression toward them,” Pauli said. “I felt like, ‘Your hands are tied.’ It’s the higher-ups who are cutting the budget.”

McCallum said he received word about the cuts Aug. 25 from his immediate supervisor, Emily Page,  production manager of Cinema Art + Science. Page did not respond for comment as of press time.

Cara Birch, a spokeswoman for the college, declined to comment on how deans had instructed department chairs to prepare budget cuts. The deans of each school were not made available for comment on the subject.

The emails cite recent budget cuts as the reason the students lost their jobs, but Birch insisted that there have been no reductions to the student employment budget because of FY16 budget cuts.

“The college has not received any information or verification on any of the claims currently being made about student employment positions,” Birch said in a statement. “If, however, a student has recently lost their position or had their hours reduced, it would have been for a reason outside of the FY16 budget.”

The minimum wage increase to $10 per hour, which the college did not accommodate by increasing the overall budget for student employment, may have necessitated the workforce reductions that occurred, she said.

Birch said chairs should not be making financial adjustments within their departments without a finalized budget based on final enrollment numbers, which are scheduled to be made known on Sept. 22. She added that if chairs are making such adjustments, the decisions are premature.

Bruce Sheridan, chair of the Cinema Art + Science Department, said there have been no adjustments to the budget regarding student employment since the budget’s  tentative finalization in May. He added that he  does not think the elimination of jobs could have happened.

“I couldn’t imagine why people ever would be hiring students in August and then saying in September that they didn’t have a job if they’re not doing that work in August,” Sheridan said. “I don’t understand that.”

Hendon sent an email to Sheridan Sept. 9 seeking an explanation about the alleged cuts to student employment. As of press time, Sheridan has not responded to the email.

McCallum said he typically employs about 20 students each semester. This semester, only five are employed. He added that there will only be one worker scheduled per shift, rather than four scheduled at the same time, as has occurred in previous semesters.

Cameron Hines, a senior cinema art + science major and current Film Cage employee, said his hours have been cut from 15 to approximately 10 hours a week.

“Now if we get a call [from a professor], we have to lock everything up, go to the classroom, answer whatever teacher’s problem that is and come back,” Hines said. “That could be 5 minutes, 10 minutes, [or] an hour. In that time, no checkouts can get made.”

If students cannot make checkouts, their body of work and knowledge of the equipment will suffer, he added.

Adam Katzner, a junior cinema art + science major who now has reduced hours in the Advanced Cameras Center, said students will have fewer opportunities to check out resources because of decreased manpower and shorter operation hours.

“They’re cutting down our ability to be creative,” Katzner said.

Hines said since classes began, students have already expressed interest in applying at the cage.

“It’s such a bitter taste in the mouth to say ‘There’s no room for you to have a job, but there’s also no room for us either,’” Hines said.

Austin Anglin, a junior cinema art + science major employed in the Media Production Center, used to work 15–20 hours a week, but will now be scheduled for as few as four hours per week. Anglin was told in an Aug. 29 email from his supervisor, Tony Santiago, cinema lighting stage coordinator in the MPC, that the hour reduction was a direct effect of the proposed budget adjustments, he said.

“It was a big surprise,” Anglin said. “I thought I had a job pretty securely and now I am starting to look for other ways to make money.”

Santiago said the MPC was asked to cut nearly 70 percent of its student workers’ hours after he was given the go-ahead to hire for the upcoming semester.

“There wasn’t any plan of ‘Maybe we should change things here and there to make the adjustment,’” Santiago said. “It wasn’t even explained how they came to that number.”

The MPC’s student workforce also dropped from about 25 employees each semester to 10, Santiago said.

Santiago added that scheduling one worker per shift in the MPC equipment cage rather than five could be a safety issue.

“We’re going to be asking one student to do the work that five students used to do in less time,” Santiago said.

Hines said removing student assistants from the MPC to help in classrooms removes another set of eyes from helping students with equipment, which can also sometimes be dangerous.

McCallum said that after 5 p.m., one student worker will be left without a staff member to overlook the cage alone, which could be a security risk.

“Everyone we have working for us [has] worked with us for a few semesters, but still may not have extensive work history,” McCallum said. “Being alone in a facility with hundreds of thousands of dollars of equipment for five hours could theoretically present a safety issue for us.”

Sheridan said cutbacks may not have been a new budget issue, but an overlooking of the finalized budget by the supervisers.

“[Staff members] may not, regardless of budget situation, have been looking realistically at what the work required,” Sheridan said.

If these cuts are not new, then not all staff members were notified about the cuts made at the end of last semester, McCallum said. He added that he was already adjusting for the minimum wage hike and the Film Cage job was posted on ColumbiaWorks, giving students the opportunity to apply at the end of Spring 2015 Semester.

“The only time I got a real number and anything other than speculation was [Aug. 25],” McCallum said.

Joseph Cancellaro, chair of the Interactive Arts & Media Department, said the IAM Department has also been preparing for cuts in student employment and will eliminate its tiered pay scale.

“Those who were getting higher pay, that’s where we are going to reallocate funds,” Cancellaro said. “All the students in our department now get equal pay.”

Daniel Wood, Emerging Technology Specialist and overseer of the Student Labs, said he did not have to eliminate any current positions, but, because of budget cuts, he hired fewer new workers.

Hines said the administration should give thorough explanations to students who have had extreme workforce reductions.

“We pay to be here,” he said. “I think that entitles us to be treated well and fair. I think we deserve to be treated well and fair no matter what the circumstances are, but we are deliberately choosing to be at Columbia. On-campus jobs are important to students at every university. If you take something as important as that away at Columbia, why would we pick here?”