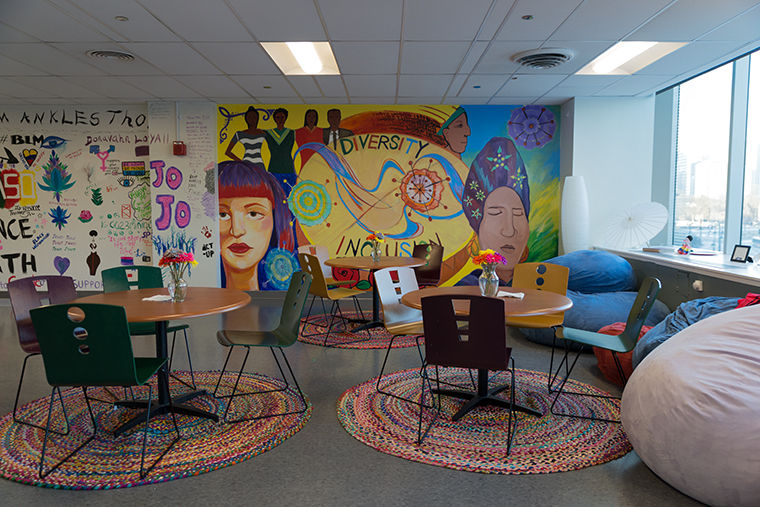 While many veterans have found the space welcoming, some miss having a designated space for student veterans because they find it difficult to connect with traditional students.

After a year-and-a-half-long absence from Columbia, Danny Woodruff, a junior radio major, found himself reminiscing about the camaraderie he once enjoyed in the Student Veterans Society when he returned for the Fall 2017 Semester.

Woodruff came back to find many of the organization’s members gone, its designated space on the second floor of the 600 S. Michigan Ave. Building empty and the doors locked, he said. Woodruff—a 33-year-old veteran who served in the U.S. Army from 2006–2013 and was deployed in Iraq from 2010–2011—discovered the group was no longer recognized and its space was integrated into the new Student Diversity and Inclusion Office on the fourth floor of the 618 S. Michigan Ave. Building.

According to Associate Dean of Student Life Kari Sommers, the veterans space worked well for a few years after its initial founding five years ago. However, the original group started graduating, and there was no one who took up the leadership mantle. This caused the group to stop being recognized two years ago, she said.

Woodruff said he went to the SDI Office for the first few weeks of the semester, and while its community was welcoming, he found it challenging to connect with the other students, considering the age and life experience gaps.

“If you’ve ever talked to a veteran, especially one that’s served overseas, they like to talk about all the random crap they went through,” Woodruff said. “[When it’s] veteran to veteran, we like to one up each other. It’s like, ‘That story is great and all, but let me tell you about Guam.’ It’s a camaraderie you can’t have with the other students.”

During the space integration at the end of summer 2017, Sommers said the college contacted current student veterans so they were aware of the change.

Cam Dupre, a 29-year-old senior cinema and television arts major, said he received notification that the student veterans space was being integrated into the SDI Office but was not asked whether he preferred an alternative. Dupre served in the U.S. Marine Corps. from 2007–2011 and was deployed in Iraq in 2008 and Afghanistan in 2009–2010.

With the creation of the SDI Office, Sommers said the college wanted to bring all student groups together, which would be beneficial for student veterans. Veterans are no longer confined to a secluded location and now have the resources and staff support needed to grow and be more inclusive with the college community, she added.

To ensure student veterans can re-form a recognized organization and maintain a leadership succession line when students graduate, the college will engage in outbound communication and will continue to support Veterans Day observation and the annual student veterans sleep-out event—which raises awareness for homeless veterans and money for the RTW Veteran Center—according to Sommers.

The student veterans leadership void could be filled by Dupre, who said he is looking to create another organization that is recognized by the college.

Barrett Bogue, vice president of Public Relations and Chapter Engagement at Student Veterans of America, said it is not uncommon for a college or university veterans organization to go into an inactive status because of a lack of succession. SVA is the largest student veterans organization and has about 1,500 chapters nationwide.

Bogue noted that those organizations are necessary because student veterans are more likely to graduate with that designated space and support system.

“It’s the same reason many campuses provide designated spaces for non-traditional students,” Bogue said. “They may be working during the day and could only attend classes at night. It also replicates the camaraderie that exists within the military and provides an opportunity to learn and interact [with one another].”

In the Fall 2017 Semester, approximately 100 veterans enrolled at Columbia using veteran benefits. For the Spring 2018 Semester, there are 71 veterans enrolled who are set to use their benefits, and the college expects 50–60 more, according to a Jan. 16 email from Paul Loretto, Columbia’s veterans educational benefits counselor.

“Getting student veterans involved in the lifeblood of the campus is a particular challenge at all colleges and universities but particularly at Columbia,” Sommers said. “We teach active disciplines where you’re setting up meetings and running around the campus. The disciplines we focus on are not research-based where you’re in a lab.”

The college administration is still trying to learn from its missteps and be more inclusive, Sommers added.

“We have to accept responsibility as administrators,” she said. “I don’t think we recognized that this was a danger, and we had not worked with [SVS] to create a succession plan. [But] in the last two years that’s an area we’ve focused heavily on.”

Universities and colleges should approach recruiting veterans similar to recruiting athletes and international students, Bogue said. Student veterans have the financial benefits to attend, are more likely to complete a degree and will also support to the local economy with their housing benefits, he added.

Given Columbia’s enrollment issues, Woodruff noted it is in the college’s best interest to provide those incentives to veterans because of the various benefits they receive.

“If [a university or college] has a good veterans group that other veterans can pick up and find out [it’s] great with veterans, that would be a big draw,” Woodruff said.