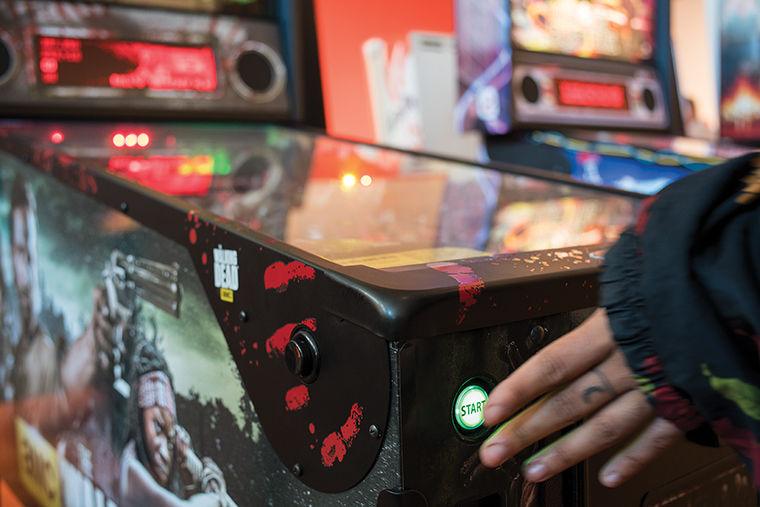 Pinball machines are shown as kinetic sculptures and installation pieces throughout Columbia’s exhibit “Skillshot,” which will be running Sept. 6–Nov. 5.

“I’m taking the pinball machine and breaking it down into its individual elements, then showing that each of those individual elements are artworks,” Porter said. “It’s celebrating how those components are a craft, and they’re a form of art on their own.”

JJ McLuckie, a junior design major, and Erik Lundquist, a 2012 design alumnus, are working on an ongoing project for the exhibit called “12 for 12.” The two are in the process of stripping an old pinball machine in the gallery and outfitting it with new designs.

“It’s not a nice, flat surface by any means,” Lundquist said. “It’s a clunky, three-dimensional object with a bunch of stuff sticking out of it, so it should be something to throw us for a loop.”

Gillies, better known as “Dirty Donny,” has done illustration work on many different platforms including pinball machines, skateboard decks and sides of vans.

“A lot of people go for comic books and record covers, but for me, I felt  [pinball was] overlooked,” Gillies said. “It’s a comic book, movie poster,  record cover, rock poster—it’s everything in one, and it’s a game.”

“When I got the job to do the Metallica game, I wanted to make it the best I could,” Gillies said. “Hand drawn, ink on paper, old school, and [I was trying] to steer pinball back to the ‘60s, ‘70s, ‘80s and ‘90s when it was hand-drawn artwork. I think a lot of pinball fans like that, too.”

The interactive aspect of the exhibit does not distract from the visual influence of the machines and surrounding pieces, freshman photography major Antonio DeLira said.

“I’m pretty sure it was the flashing lights [that drew me to observe the exhibit], and I heard the pinball games. I was definitely fascinated by the artwork on the back [of the machines],” DeLira said.

Pinball machines are a classic medium for illustration, one that artists continue to reinvent today, according to Lundquist.

“They’re truly amazing pieces of art, from the graphics to how those things operate,” Lundquist said. “The artwork incorporated makes those things pretty incredible.”