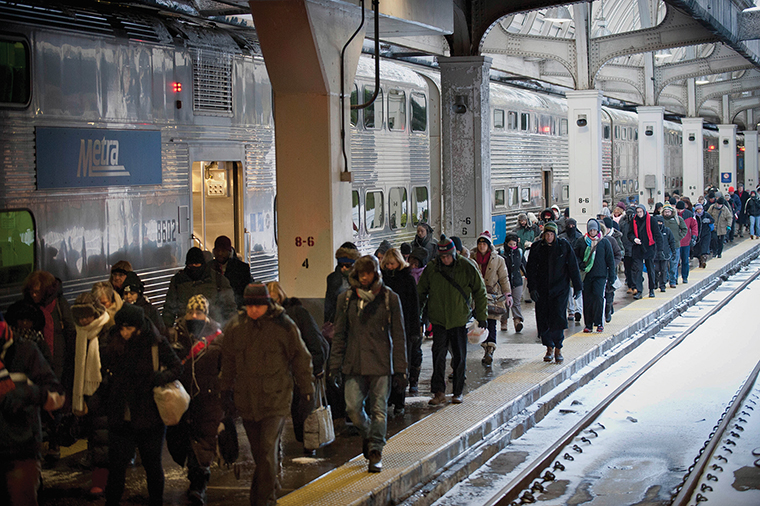 More commuters than ever are turning to public transit, although Metra was left out in the cold during the Great Recession as commuters heavily relied on the Chicago Transit Authority, according to a Feb. 6 study by the Regional Transportation Authority.

Despite the recession, combined ridership on the CTA, Metra and Pace increased 1.9 percent from 2008 to 2012. However, the CTA was the only agency to gain ridership, with a 3.7 percent increase, according to the study.

During that period, Metra ridership experienced a 6.3 percent decline from 2008’s record-high numbers. Meg Reile, a Metra spokeswoman, said the company’s ridership is contingent on the job market.

“In 2008, the economy was going stronger than it had in decades and the job market was growing,” Reile said. “Once that downturn occurred, the unemployment started rising, and our ridership is heavily tied to the working commute market.”

There are a number of factors that play into Chicagoans’ transit choices, said Brenna Conway, campaign director for the Active Transportation Alliance.

“We’re happy to see that regionally more people are choosing transit; however, we do recognize that it’s difficult for many suburban people to take transit,” Conway said.

Over the last five years, Metra had a difficult time with both its leadership and fare increases, Conway said. These factors could have influenced riders, but Conway said the city, county and state should direct more funding to public transportation and make it more accessible to more people.

“The transit agencies are doing a pretty good job,” Conway said. “They are working hard to provide a good service for transit riders. In a lot of cases they do not have the resources that they need to build new lines and extensions and increase the frequency of their buses and trains.”

Marisa Schulz, assistant director of the Chaddick Institute for Metropolitan Development at DePaul University, said their research shows Metra not only lost commuters during the Great Recession, but that people who live in the suburbs had less expendable income to visit the city for leisurely activities.

Families dealing with unemployment had to scale back on spending, and Metra also had to make cuts during the recession that contributed to the decrease in ridership, Schulz said. Suburban commuters are looking for a quick, easy and affordable way to get to the city and Metra struggles to provide that, she said.

“It’s an incentive,” Reile said. “You can save money on your income taxes because these costs can be allocated as pre-tax income. It’s existed for a while, but it’s another way [to save money] as the job market shifts. It’s always good to go out there and make more people aware of the programs.”

Conway said ridership can be increased by adjusting routes, increasing frequency of trains and establishing a unified fare system that riders can use to pay for Metra, Pace and CTA fares.

Conway also said Chicagoans and transportation agencies need to focus on improving the local transit system rather than comparing it to other cities because it limits the city’s progress.

“If we just compare ourselves to other cities, we will just be limited to looking at cities that have similar transit systems,” Conway said.

Conway said the problem is the growth of Chicago’s transit system and that there must be a way to expand the system’s capacity to support the growth.

As the economy grows stronger and the job market steadily recovers, Schulz said she expects an increase in ridership for Metra and Pace systems.

“I think people will see a change or an uptick in the recession,” Schulz said. “Jobs are doing better and more people will be turning to Metra and Pace. They are going to have more funds to improve their routes.”