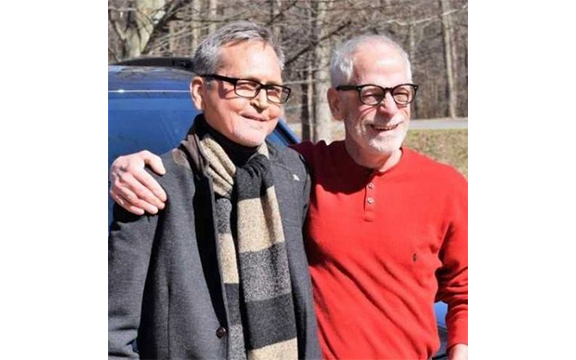 Assistant Dean of the School of Media Arts Charles Castle passed away March 21 at age 60 after fighting cancer.

Castle is survived by his partner, Kelley Wright; his mother, Lucy Ann Matz; three siblings; and his nieces and nephews.

Bartoni said Castle was a tremendous asset to the school as well as a dear colleague of 10 years and very good friend.

As assistant dean, Charles was known for his diligence, and he created procedures enabling the office to run at an optimal level to benefit students, faculty and staff, said Senior Vice President and Provost Stan Wearden in a March 27 emailed statement.

“Those who knew Charles were swiftly exposed to his wry sense of humor, insightfulness and his willingness to always help,” the statement said.

Castle was diagnosed in February 2017 with neuroendocrine cancer, according to Wright, his partner of 22 years.

“Charles was a very intelligent individual, caring and very thoughtful,” Wright said. “He put everything into his career and into our relationship. We spent all of our time together and we never fought. We never even had a fight in 22 years.”

Eric Freedman, dean of SMA, said in a March 29 email interview that Castle’s legacy is his conscientious and committed work ethic as well as his professional ethics.

“SMA is a complex organism, and Charles understood this and understood that evolving [and] moving forward is not without its challenges,” Freedman said. “His strong ethical grounding is an attribute I will look for as we move forward and look to fill the vacancy in my team.”

Eileen Long, former manager of Administrative Services in the Cinema and Television Arts Department, met Castle at Northern Illinois University when she was 18 and they had been best friends ever since, she said.

“We were both actors and became best friends,” Long said. “We moved into the city together. We liked to joke that we were the original Will and Grace.”

Long said Castle was a talented artist, a driven worker in the dean’s office and had the best sense of humor.

“We always had each others’ back. I know he is out there in the universe but he’s not here, and that leaves a big hole for a lot of people,” Long said. “Just knowing that he is not here makes it tough.”

Chair of the Communication Department Suzanne McBride met Castle when she started at Columbia in 2005. She worked closely with him in the last few years since her appointment as chair.

He was a pleasure to spend time with, McBride said, and she valued his work as a colleague.

“I often told him that he was someone I depended on greatly,” McBride said. “It will be very difficult for me to do my job without him.”

The college is planning a memorial service to be held later in the semester, according to McBride.

“I feel fortunate that he was in my life, and I’m going to miss him a lot,” McBride said. “He was a really great person.”

Update 4/2/18 at 11:45 a.m.: It was previously stated that Chair of the Communication Department Suzanne McBride worked closely with the late Assistant Dean of the School of Media Arts Charles Castle since she started at Columbia in 2005, but McBride did not start working closely with Castle until a few years ago, but met him in 2005. The Chronicle regrets this error.