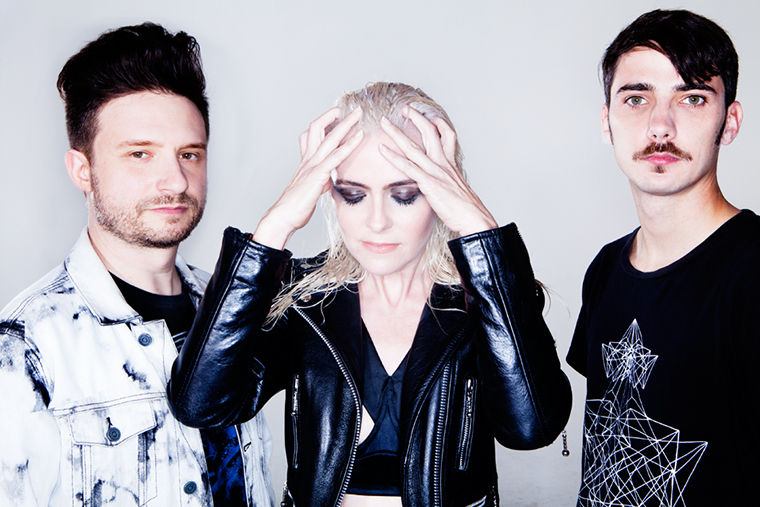 My Gold Mask took past sufferings and put them into its album Anxious Utopia out March 4.

With its raw, emotional lyrics and synthetic electronic beats, electronic post-punk band My Gold Mask has garnered a loyal following in Chicago. The band’s second full-length studio album, ANXIOUS UTOPIA, is scheduled to be released March 4, followed by a show at Lincoln Hall, 2424 N. Lincoln Ave., on March 5.

The band’s members, guitarist and vocalist Jack Armondo and lead vocalist and percussionist Gretta Rochelle met at a rooftop party in Chicago approximately two years before forming My Gold Mask in 2009. The two decided to combine Armondo’s talents in acoustic guitar and Rochelle’s rock star vocals to form the group, adding their drummer James Andrew in 2013.

The Chronicle spoke with Armondo and Rochelle about the band’s latest album, being on tour and living in Chicago.

THE CHRONICLE: Where does the name My Gold Mask come from?

JACK ARMONDO:The name came from the idea of masks and identity. It was kind of  a silly name to us, but it’s a self-referential thing to the band being a different, shiny presentation of our art. It just seemed to fit.

How has living in Chicago influenced your sound?

GRETTA ROCHELLE: The environment alone has shaped our sound a little bit. We practice in a warehouse and usually do a lot of our writing in the winter. The elements play a factor in our sound. We love Chicago, and I think anywhere you live and anything you do is going to find its way in through your music.

How does this release differ from your last album?

GR: I had a difficult last couple of years and I suffer from anxiety and panic disorders. [ANXIOUS UTOPIA] was my response back to that. I was trying to take control over the situation and turn it into something positive. Being able to turn that whole situation into something artistic is really important.

JA: There’s still a lot of dark, murky stuff in there, but there’s lighter stuff dealing with issues and battles and turning them into this other feeling. We’re using them to step into the light with it, and that’s kind of the Utopia part. We’re acknowledging all of our hang-ups, but we’re not sitting there and brooding on them. We’re figuring out how to plug forward.

What do you hope listeners take away from the album?

JA:It’s more about wanting to connect with the listener. Think of it like a massive support group. My Gold Mask never quite fits in where everything else does. Hopefully, [listeners] feel a connection or a kinship, and maybe we can share that feeling together.

What do you expect from your upcoming Chicago show?

GR: We’re from Chicago, so it is our home base, and I want it to be a big party. It’s the kickoff of our tour and going down to South by Southwest. It’s going to be a celebration for us and our fans [who] have been waiting.

What is next for My Gold Mask?

GR: After the release, we’re going to be touring down to South by Southwest and continue that tour through the West Coast, Southwest and East Coast.

JA: After that, we’re looking at some other stuff. We have a lot of people working on remixes we are waiting to unveil, so at some point we may have a remix album to follow up ANXIOUS UTOPIA.